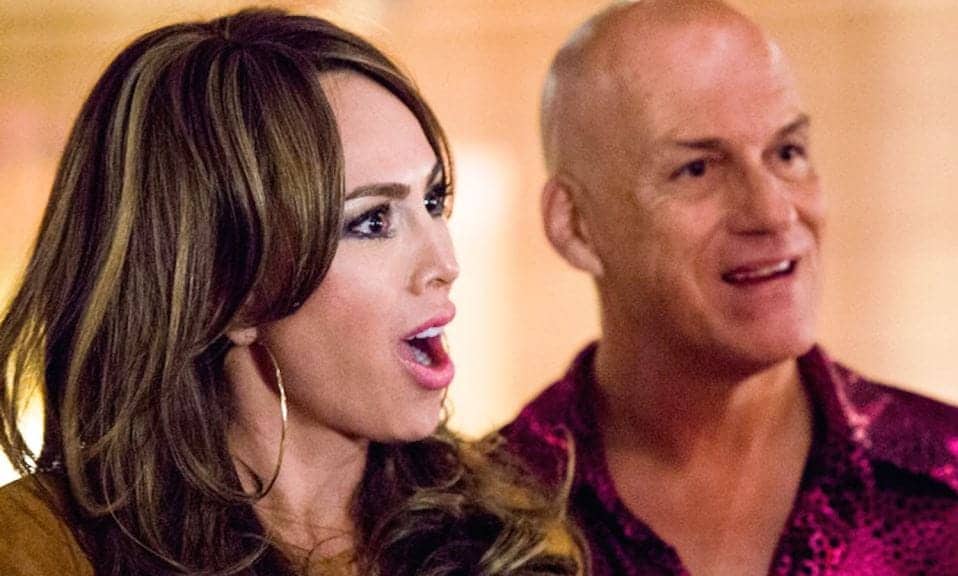 Following the not so shocking announcement yesterday from Kelly Dodd revealing that she wants a divorce from her husband of 11 years Michael Dodd, while adding that they were both”miserable” in their marriage, a new report is now shedding light on the ugliness from her first divorce filing from Michael.

If you recall, this isn’t the first time Kelly has left Michael as she first filed for divorce from him back in 2012. Kelly revealed on the Real Housewives of Orange County last season that part of the reason she went back to Michael was because of the nastiness involved in their divorce battle and custody war over their now 11-yr-old daughter Jolie.

Well Radar Online is now revealing just what went down during her first divorce plus the accusations they made against each other.

For starters, Kelly requested spousal support from Michael and wanted him to pay $20,000 in attorney fees.  She claimed in court filings, “Since the day I filed for dissolution of marriage, March 6, 2012, Respondent has only given me access to $5,000 for our daughter and my current needs.  My monthly rent is $5,500 per month, Jolie’s monthly school fees average $1,000.”

Kelly wanted spousal and child support in the amount of $41,666. She revealed that Michael earned $500,000 annually.

Michael however asked the court to deny her request for spousal support, saying Kelly doesn’t use the money he gives her to take care of their daughter.

“I have been paying all expenses and at Petitioner’s counsel’s request I transferred $50,000 to Petitioner,” he claimed. “Petitioner does not use the funds that I provide her to just provide for her and our daughter’s living expenses. Petitioner spends money frivolously, has a tendency to shop a lot, and uses a great deal of funds on purchasing unnecessary items.”

Michael also accused Kelly of being a neglectful parent when she asked the court for joint legal and primary custody of their daughter.

“Since moving to Orange County, Petitioner has had the tendency to leave our daughter with Petitioner’s mother or with babysitters in order to allow her plenty of opportunities to go out on dates, to bars, or have girls nights with her friends,” claimed Michael.

The accusations took a turn for the cray cray when Kelly accused Michael of stealing from her!

“Respondent searched through my personal belongings and removed two watches (one a Cartier and another a Breitling) from the residence that are my separate property,” she stated of a time when Michael watched their daughter at her home. “Subsequently, both watches were returned to me by Respondent.”

Ultimately both were ordered to share joint and legal custody of their daughter. And at some point following the 2012 divorce filing, the couple reconciled as Kelly was then arrested in June of 2014 for domestic violence against Michael.

“Kelly Denise Dodd did willfully and unlawfully inflict corporal injury resulting in a traumatic condition upon [Michael Dodd], who was the spouse of the defendant,” read the court papers.

Michael then asked the court for a restraining order against his wife, and he was granted one.  The case was ultimately dismissed after Kelly completed 10 alcoholics anonymous meetings and six months of therapy ordered by the court. And of course the couple once again reconciled.

It wasn’t until last week that a shocking Radar Online report revealed that cops had been called an astonishing 11 times to the couple’s home this year alone. Kelly first posted that the report was a lie on her Instagram page but she deleted that post moments later. And then yesterday, she revealed she intended to divorce Michael in an interview.

“Our marriage is over, I’m out of there!” said Kelly. “We’ve had problems for years and I’ve had enough. I’m done with our marriage. It’s just a case where two people can’t get along. It’s best if we went our separate ways and concentrate on our daughter.”

In the past Kelly has also described her marriage in very ugly terms. “It was a nightmare,” she said of her marriage to “control freak” Michael on an episode of RHOC. “It made me realize it was easier being with him and having my family together than being divorced. We don’t have a perfect marriage at all, but I’m going to suck it up like my parents did.” She has also described him as “Hitler.”

One usually hopes that a couple can reconcile and work things out for the sake of their kid, but perhaps it is best for these two to stay apart. As no child deserves to grow up in constant chaos and turmoil.

TELL US – DO YOU THINK KELLY & MICHAEL SHOULD GET BACK TOGETHER?