Home Real Housewives of Dallas News RHOD’s Cary Deuber Slams LeeAnne Locken Over Gay Rumors; LeeAnne Asks Why She’s the Only One Who Has to Own Her S**t?

RHOD’s Cary Deuber Slams LeeAnne Locken Over Gay Rumors; LeeAnne Asks Why She’s the Only One Who Has to Own Her S**t? 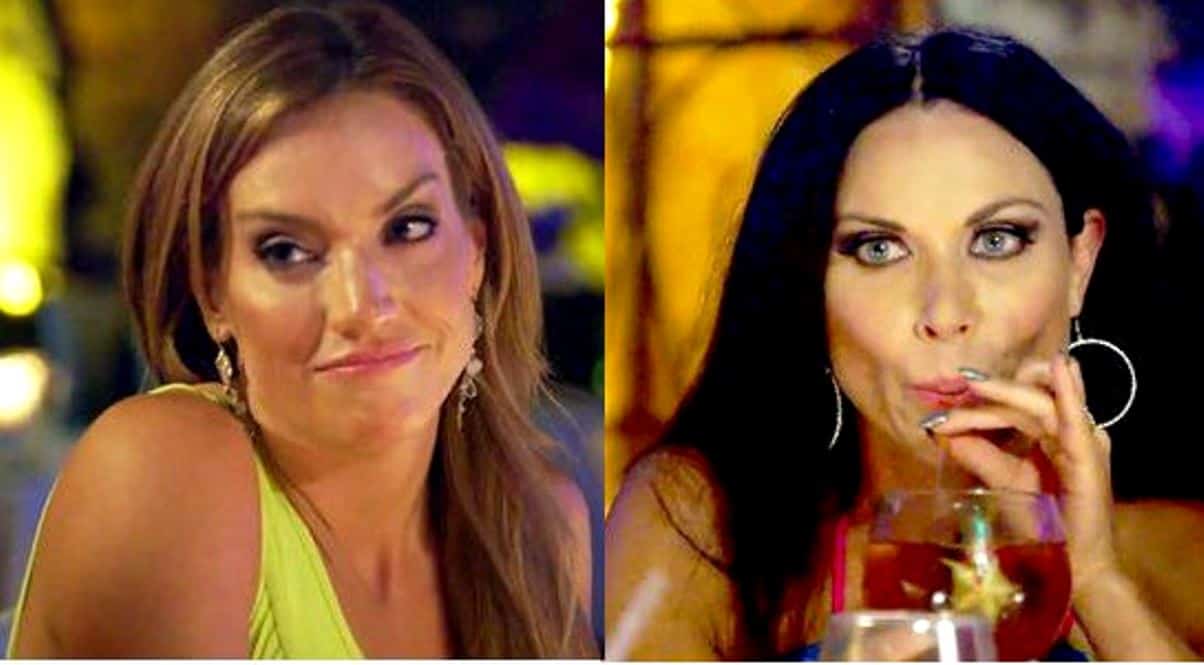 Following the highly dramatic episode of this week’s Real Housewives of Dallas, castmates Cary Deuber and LeeAnne Locken are still taking shots at each other off screen!

First Cary slams LeeAnne in her latest blog over spreading gay rumors about her husband Mark Deuber in a previous episode. Cary asks why LeeAnne is so preoccupied with her husband Mark and says she doesn’t believe LeeAnne is every truly sorry for her actions because she keeps repeating them.

Below are excerpts from Cary’s Bravo blog –

“OK, I’m cutting to the chase. Let’s see what all LeeAnne Locken has to say about me and my husband this week:

-“The problem is ALWAYS Cary.” Hmmm. Seems unlikely, but I’m open to self-improvement.

-“Mark has a chop shop.” Attack our business.

-“Mark gets his d— sucked at The Roundup.” Attacking my husband/best friend with insulting allegations.

-“Anyone who comes to Dallas is going to hear what I hear.” Is it somewhere in the Dallas brochure?

-“Is he gay? Is he straight? Is he bisexual? Does he have a separate closet with women’s clothes? I don’t care.” If you didn’t care, sweetie, you wouldn’t talk about it nonstop. Try taking our names out of your mouth and see how nice it actually can be.

-“It would be awesome to be the next bisexual couple on The Real Housewives.” If we were, we would be, but we are not — sorry to disappoint. This is the most backhanded B.S. I’ve ever heard! Ugh, aren’t you tired of talking about us? I talked about Rich once, and it was awful. I felt bad trying her style once, but she still has energy to come for the Deubers? Boring.

-“I don’t laugh or say a joke about something that is hurtful or mean or ugly. I f—ing own it and I apologize for it.” Yes, you own it, and own it, and own it…but you never stop. What does “owning it” even mean if you continue to spread lies manufactured to suit you and your cause, offer me a backhanded apology, and continue? What is your cause? Trying to hurt my husband, our business, and our family? And you do laugh and joke about hurtful, ugly things. We can all see you in your confessionals and at the honest-tea reacting to anything related to me and my husband. I’m sarcastic and dry, but I don’t fake nice like “I’ve changed” when in reality, it’s more of the same old ways.

I apologized to LeeAnne’s face in less than 24 hours for the tiny weiner comment. LeeAnne spun it and complained about repetitively apologizing and not getting fair credit for her apologies, but that’s because she repeats the same behavior over and over. It’s like I said in my confessional: “You wouldn’t have to keep apologizing for s— if you didn’t keep doing s—!” I went low and got in the dirt, playing LeeAnne’s game of low blows at spouses, and I felt horrible about it. I still do. It is wrong to take out your frustration with one person on their partner (whether you’re making a bad joke or not). It’s all wrong! And I felt like s— after doing that to Rich. But she has been talking about my man for two years and has no real remorse! Aren’t you tired? I sure am after going low about Rich! Aren’t you tired after steadily talking about Mark, fake apology after fake apology? Take a nap, girl. I’m learning that when it comes to LeeAnne, this B.S. about “owning” your s— really only means that you claim it and agree that you did it. That’s not enough! Admit that it was wrong, and Don’t. Keep. Doing. It. Again. Simple! I thought we learned this as kids!”

LeeAnne also fires back at Cary in her own blog as she wonders why she is the only bad guy in the group and the only one who has to own her s***. She wonders if Brandi Redmond is truly her friend, calls Stephanie Hollman a mean girl, and says Cary is lying about what she claims not to have said about Brandi’s doctor. Oh and she also explains why ‘Sexual Chocolate’ ended up in her room!

Below are excerpts from LeeAnne’s Bravo blog –

“OK. So, when Cary Deuber called Brandi Redmond a liar, and Stephanie Hollman then slowly leaned back, I sensed that Steph would be siding with Brandi in this. So, does that mean Brandi is telling the truth? Well, it sure seemed that way that night at the table. If you watch Steph closely, when Cary asks her to basically “back her up,” Steph can’t even open her eyes. That tells me that Brandi did in fact call Stephanie and divulge the information that was being repeated at the table. I truly feel bad for the doctor who “killed someone on his table.”

After listening to Cary’s confessional, when she says that I turned the conversation around on her, all I have to say is this: Yes, I did! She was repeating and accusing me of things that I never said, so duh! Of course I took a moment to bring clarity to the conversation. The fact that she thought she was “best friends” with Brandi and yet found it so easy to turn on her is truly not my problem! #BYE

Oh! And when Cary asked about what my “just hands” comment (which she calls a threat) and her comment about Brandi’s doctor have in common, I realized how far from reality Cary is. Hello — one led to the other!

OK. Moving on to the most fun part of the trip.

OMG. Everyone, the night of the tequila bar is why I renamed “TEQUILA” to “TO-KILL-YA.” The club was an absolute blast, and it was nice to have a moment when D’Andra Simmons and I could just have fun, you know? I was also shocked at how much Steph and Brandi seemed to like us both that night, too. I think we renamed H & M that night as well, but you’ll have to ask Brandi about that.

The next morning when Kameron Westcott told Cary that Brandi and Steph felt the total opposite of how they were acting the night before really put me back on the “oh well” train. Y’all, I am not good at flipping and flopping. I like to have an opinion and stick to it. It also makes me wonder, how do they really feel about me and D’Andra?

Steph and Brandi dressing up to portray D’Andra and myself was hilarious! The headband for D’Andra, the straight hair for me — NAILED IT! But then, as usual, Steph had to take it to a new all-time high/low. “OMG! You look like a STAR! Like, that’s exactly what she would wear to go grocery shopping or you know, sign autographs on the street.” Really? What happened to the nice Steph that I went drinking with the night before? Maybe alcohol determines the personality. Now, let’s talk about the part where they went into our room. I am not happy about that. I took “sexual chocolate” on day one to hide it, and I hid it over the balcony outside. How it ended up in bed is a question for Steph and Brandi, LOL! Irritations aside, I will say that seeing this silly/fun side of Brandi makes me miss the friendship I thought we had, as well as the opportunities that could have been fun for us together!

Now, obviously I don’t enjoy being confronted about things I’ve done that I wish I hadn’t. Nobody likes that. But sometimes, you have to own it. If you look at my face when I’m confronted for the first time about what I said, you’ll see MASSIVE DISAPPOINTMENT. The truth is that I don’t remember saying it. Obviously I did (we have all heard the recordings), but the look on my face is exactly how I felt about myself: Utter disappointment. I should never have said it under any circumstances, so for that I am sorry! When it comes to something I did that I’m ashamed of, I own it. Didn’t you hear me after being confronted? I said, “I’LL OWN THAT.” But, here we go again — me owning my s—-y mouth, and Cary not owning ANYTHING. She wants it to be “just a joke.” Well duh, so do I, but guess what? It’s not for either of us. I am really getting tired of being the only one who has to own their s—.

I was so confused when Brandi said, “I love to hate her, but I hate to love her.” Like, I keep trying to find the positive somewhere in that statement, but I’m coming up short. I was sitting only two feet away while they were talking about me, which is why I stepped in. For Cary to say in her confessional that I am “always apologizing” is ridiculous. Who was doing all the backwards non-apologies just last week?

OK, let’s move on to when Cary said that when she hears something hurtful, she lashes out. HELLO. Uh, YEAH. That’s what people do; it’s normal. So, why is it OK for her to have the same reaction as me, but I’m the only “bad” person in the group?

And, was it really necessary when Steph made that nasty comment about me being Tyson over Ali? No. When will Steph look at this footage and see how mean she really is?”