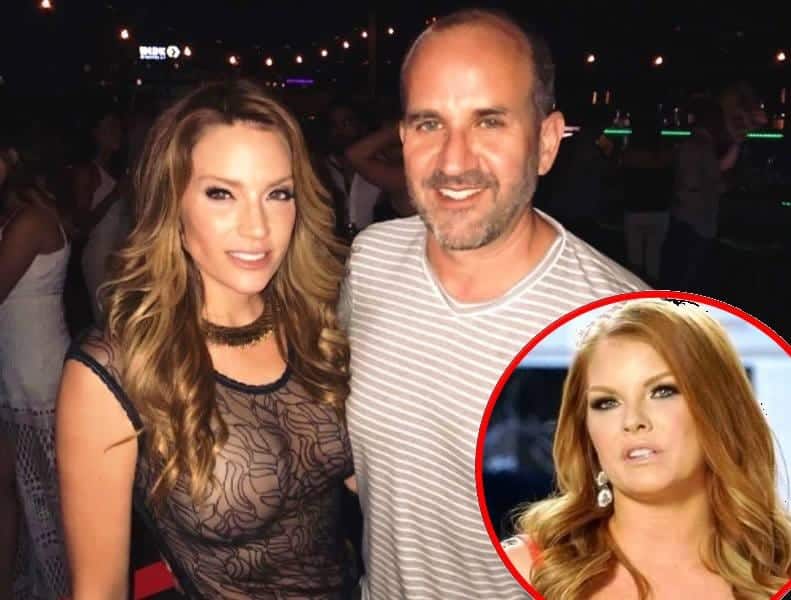 Nanny-Gate continues to live on as Real Housewives of Dallas stars Cary Deuber and her husband Mark Deuber are now addressing the rumors that they started having an affair when Cary used to babysit for Mark and his ex wife.

In an interview with Bravo’s Daily Dish Podcast, Cary first denies she was an official nanny, stating she only babysat for Mark and his ex-wife a couple of times.

“I wasn’t the nanny. I babysat the kids probably a handful of times when Mark and his ex-wife were in Europe together,” stated Cary.  She explained that due to being a nurse, she had free time when Mark and other surgeons at their hospital were out on vacation. “I had nothing to do for the weeks that he is in St. Tropez or in Switzerland, and so I would graciously actually watch his kids, take them to school, pick them up, and feed them while him and his ex-wife were out of the country,” she continued.

Mark also explained that it was another surgeon that recommended Cary help watch his kids.

“She had babysat one of their kids and they’re like, ‘Hey she could watch your kids. She’s watched ours and she’s great; she’s trustworthy.’ I’m like, ‘Yeah, that makes perfect sense.’ And the kids loved her,” said Mark.

Mark goes on to deny they had an affair, while making it clear that they don’t care about the rumors because they are happily married and know the truth. “I mean, if you want to believe we had an affair, believe it. Go ahead. We didn’t, but go ahead and believe it. It doesn’t hurt us either way,” said Mark.

Moving on to Cary’s friend Brandi Redmond who is now feeling remorseful for bringing up the nanny affair rumors on the show.

In her Bravo blog, Brandi issues a major apology to Cary and Mark for doing “something so low and hurtful,” and explains why she brought up the accusations. Below are excerpts –

“First, as I write this, my eyes are overwhelmingly pouring with tears. I am truly sorry for the pain, heartache, and embarrassment I’ve caused the Deuber family. I love and respect the family as my friends and their practice. I have never done something so low and hurtful in my life. Not only am I disappointed in myself, but I can’t imagine how people must feel that are constantly on the move to bring others down. It’s exhausting, and my soul is beyond empty for that darkness I created. I know time heals all things, and my prayers are for healing the Deuber family and myself so that I never let anyone down that I love and care about.

So let me start back with being hurt by Cary at my party. I felt a mix of emotions between Mexico and my party, but I didn’t have an opportunity to speak with Cary one on one. I felt that we both were distancing ourselves from each other, but I will say I was feeling nasty in my heart for what I said in front of the group. This feeling was eating at me, and you even hear me say to D’Andra and LeeAnne that Cary had been a good friend to me. I was addressing my guilt in my own way as LeeAnne asked me to repeat to D what I’d said.  I do think watching Cary and Stephanie’s conversation was shocking, but at the same time, I get it. Cary has every right to be upset with me, and if she wants to call it a spell, so be it because I was wrong. I by no means am a witch, but I do think I can be a b*tch at times. I was being a disrespectful b*tch when I did what I did in front of the group to Cary. I would actually love to blame my actions on a spell myself, but I did that, and I once again am ashamed of myself. My heart will forever be torched with owning that my integrity was undoubtedly tested. I don’t want my friends or family to think that I manipulate people to get my way or my point across. Cary was looking out for Stephanie due to my behavior and going below the belt. I respect Cary for this, and I’m glad she did, even though the truth hurts. I’m a strong believer that you are who you hang out with, and hey, if I went below the belt once, would I do it again?

Cary wanting to speak at the party was a long time coming. I knew it was going to happen eventually, I just didn’t know when. This was our first face to face moment. I didn’t want Cary to think that I didn’t want her in the group. That was LeeAnne saying that, not me. At the end of my party, all I could do is grab my neck and think what had just happened. It went so wrong on so many levels. So there we were, at another party, and thank God it was just the two of us. Cary was extremely upset, and I don’t blame her. I was glad we could hear each other. I felt my tone shifting because I was indeed wrong. I shouldn’t care what she does behind closed doors unless it directly affects me. Do I have opinions on things that are sacred? 110%. But I have learned that I need to base my life on my life and not others and what they go through. Everyone has a story and their truth. My truth is that I was wrong on every level. Two wrongs don’t make a right, so I hope and pray my one wrong will be buried.

As far as my feelings go, it’s easy to get worked up with these ladies. One minute you hear voices saying, “She doesn’t like you, look what she said about you, you need to watch yourself.” But with me, I have such a tender, forgiving heart, and I want to see the best in everyone. I hate living in negativity — I think this is why I’m such a free spirit. I let people in time and time again to the point that my husband has to step in and say, “No more.” I am my worst critic, and I am still to this day trying to forgive myself for what I did to Cary. Cary, thank you for loving me and my family and for forgiving me. I without a doubt know I’m not perfect, but you are a true testament of forgiveness. Thank you, and I love you.”

TELL US – DO YOU BELIEVE CARY & MARK HAD AN AFFAIR? IS BRANDI TRULY SORRY?