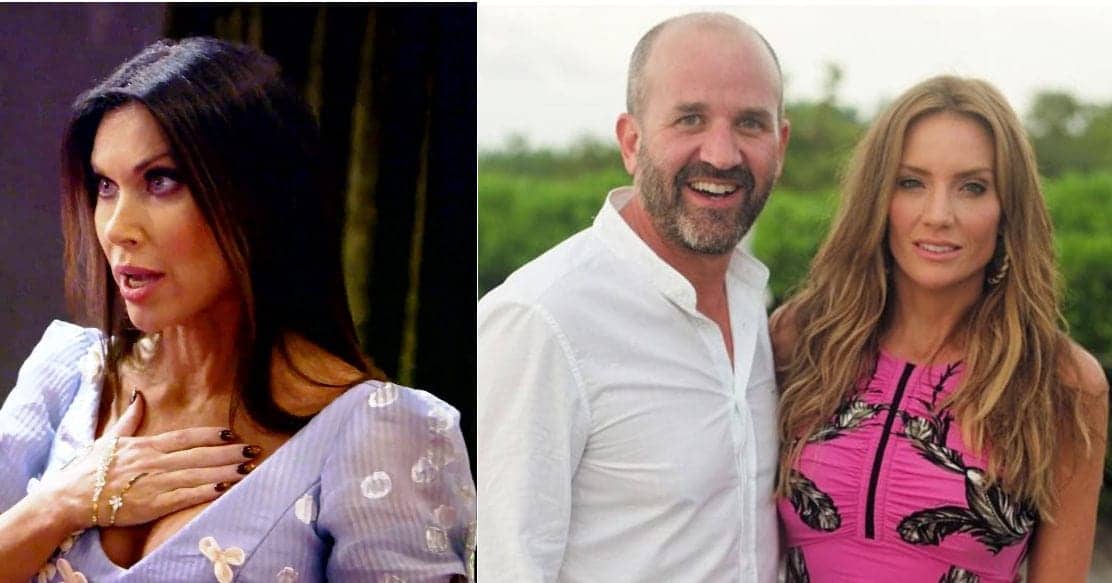 We all know that old saying — hell hath no fury like a LeeAnne scorned!

It’s now been days since Bravo aired the first part of the Real Housewives of Dallas season 2 reunion, and LeeAnne Locken is still raging mad.

Unfortunately for Cary Deuber and her husband Mark Deuber, they continue to be on the receiving end of her fury.

As if making unfounded claims about Mark’s sexuality during the season wasn’t enough, LeeAnne has now resorted to making her most outrageous allegations yet when she appears to accuse Mark of forcefully trying to make out with her! For reals.

First, a fan asked LeeAnne and Cary a question by tweeting, “@CaryDeuber Why do you care so much who performs @LeeAnneLocken’s surgery? Would you prefer she go to ur husband?”

LeeAnne then tweeted back, “Never gonna happen! He CREEPS ME OUT! Especially after trying to shove his tongue down my throat! #RHOD GROSS!” 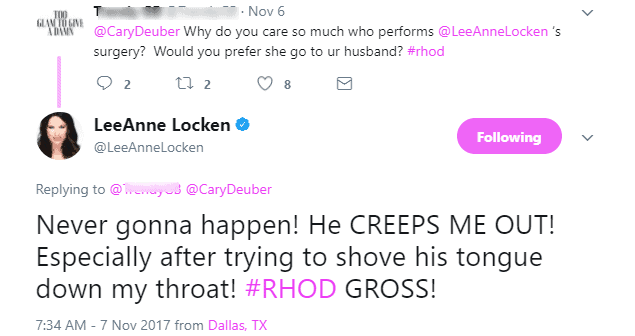 We are just as confused as you are as to what this means or what she’s trying to imply as she has yet to explain what she was getting at. So apparently  when Mark is not at the Round Up trying to meet men, he’s hitting on LeeAnne!

Moving on as LeeAnne took more digs when she appeared to throw homophobic insults at Mark, by repeatedly referring to him as a “Princess” and implying he is not a real man.

You can see those classy screenshots below.

Cary did respond to LeeAnne, writing – “Sad… same old mess. I guess this is what “owning it” looks like.”

When a fan asked Cary if LeeAnne was owning her comments, Cary tweeted: “No idea what that means to her, but I hope that it means one day reigning in the hateful comments that are so intentionally viscous. This is supposed to be fun! We should all be able to crack jokes, and I can take it! but she always takes it too far…”

Vicious indeed. Unfortunately for LeeAnne, she is lacking in the credibility department after claiming on the reunion that a police report about a violent incident involving her, a knife, and an ex-boyfriend didn’t exist. That is false. That police report does exist and we wrote about it back in August.

This comes following LeeAnne’s revelation that she is quitting the RHOD, when she tweeted earlier this week that she would not return for a third season.

Part two of the RHOD reunion airs Monday night on Bravo at 10/9c.

TELL US – DO YOU THINK LEEANNE IS GOING TOO FAR WITH HER LATEST COMMENTS?