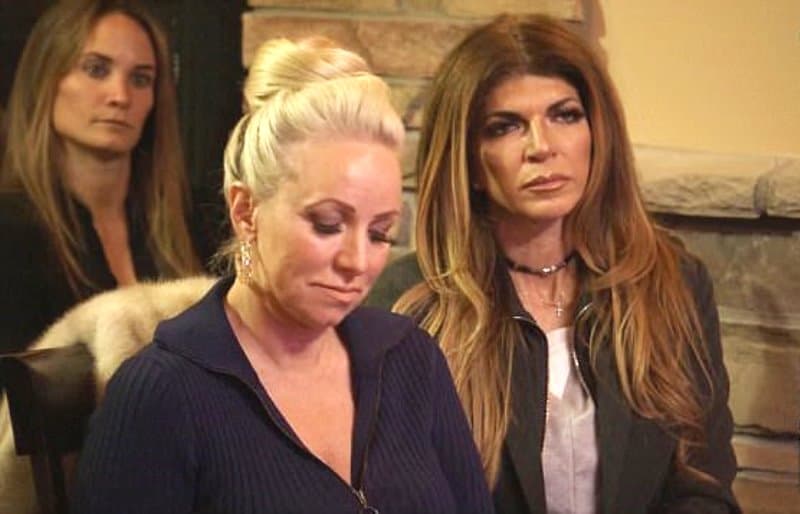 Say what you will about the ladies of The Real Housewives of New Jersey…they’re unpolished, politically (and grammatically) incorrect, one’s even been to prison…but they ALWAYS keep it real! Last night’s episode was no exception.

When we pick up with the ladies in “A Retreat to Remember”, many of the friendships are still in varying states of upheaval. Tensions have been high this season, and loyalties are being tested.

If you’ve been paying any attention these past eight seasons, you know that loyalty is VERY important to this group…especially Teresa.  Let’s face it Teresa’s been through the ringer lately, and she’s never been the sharpest tool in the shed, so it’s no surprise that she was confused when she was told  that her friend of 20 years, Dolores, had been talking out of school to Danielle Staub.
Danielle, of course, is back after 5 seasons, and considering that Teresa, and her friends, attacked her, called her every name in the book, and flipped a table at her in front of an audience of millions, it’s highly likely that Danielle has an ax to grind.

Dolores decided to sit Teresa down, and explain that to her. She repeated her warning that Danielle is not to be trusted, and even went so far as to suggest that Danielle may be doing drugs.

Teresa wasn’t buying it. According to her Danielle is “spiritual” (yes, I laughed so hard wine came out of my nose, too).  After all, she “does yoga”, which in Teresa’s mind, is somehow code for trustworthy, honorable, and most definitely NOT A “prostitution whore”, who has been “ENGAGED 19 TIMES”!

In the end, though, Teresa said that if she MUST choose between the two, she’d pick Dolores. But their renewed friendship seemed tenuous.

Their entire conversation was peppered with dispersions and judgments about each other’s life choices. Teresa doesn’t understand why Dolores has allowed her ex husband, Frank, to move back into her house. Dolores thinks Teresa was foolish to stay with Joe. She called his behavior toward Teresa “nasty”, implied he was cheating, even dared to mention the very public, but somehow forbidden, subject of their crimes. This clearly did NOT sit well with Tre, but they both said that their choices were none of the other’s business and managed to moved on.

Nevertheless, as we all know, Teresa does not like to hear the truth about herself..or Joe…or her kids..so trust me, this will be revisited soon.  With so much going on, Siggy decided that this would be the perfect time to do the overnight retreats she’s been wanting to do, despite the fact that her husband “told..not asked” her to cut back. Yeah right! Siggy give up the chance to run her mouth for 48 straight hours to an audience being held captive in the woods?! Never!

Dolores even managed to talk Siggy into inviting Margaret along on the retreat. But there was a catch, of course. Danielle was coming too! Now, what could possibly go wrong? Literally, everything.  It was tense from the beginning. Dolores didn’t even speak to Danielle in the van on the way to the retreat. The other ladies talked smack about Siggy’s Instagram post the whole way.

When they finally arrived, Siggy being Siggy, immediately called Margaret out  publicly. About calling her “Soggy” Flicker. Yes, she’s still on that.  She explained that, as a child, her name was a constant source of torment. The kids called her “Squiggy” and “Squishy”, and (gasp!) even “Sigarette”, and it hurt her, and for someone to make fun of her name STILL hurts her. This whole diatribe was accompanied by the usual waterworks , of course, and Margaret felt bad, and apologized. Manipulation Accomplished!

Teresa decided that since everyone was coming clean and working on themselves, she’d talk to Danielle. She told her she had chosen to believe Dolores, and Danielle claimed to understand that, given their long friendship.  This could have been the end of it. But Teresa had to end the conversation with one final blow: Dolores didn’t just call Danielle a liar (and a scum bag), she’d said Danielle was probably on drugs.

I get it. Danielle’s been accused of everything from kidnapping to being a part of a Colombian drug cartel. She has kids. The last thing she needs are more rumors being spread about her. But does Danielle wait until she can sit down with Dolores alone? Hell no!! This is Jersey, and these girls need an audience (preferably one that’s enjoying an otherwise quiet dinner in a pricey restaurant)!

Once they all sat down to dinner, and everyone was getting along, and talking about the retreat, and how nice everything was, Danielle decided to pounce. But Dolores was having none of it. When Danielle brought up the drug allegation, Dolores just looked at her, and without missing a beat said “well are you” on drugs? “You really do seem off”.

Danielle was aghast! But Dolores finally dismissed her, and her hurt feelings completely.  She said that whatever she said about her, it really didn’t matter because Danielle wasn’t going to “do anything about it”, and therefore, there was nothing more to talk about.

Well, damn! The rest of the ladies seemed pretty shocked by Dolores’ cold demeanor. Even Siggy agreed that the drug accusations were crossing the line.

Back in their own rooms, Margaret and Siggy told Dolores that she may have gone too far, and really hurt Danielle’s feelings, but Dolores was unmoved, to say the least.

Now, after the big make up the day before, and being on the same side in the Dolores/Danielle drama, you would think that Margaret and Siggy would continue to get along, right? Wrong!

And perhaps you also thought that we were going to finally get through an entire episode without any mention of that damn cake?
Oh but no! With just 5 minutes left of the episode, cakegate reared it’s ugly, ugly head.

During one of the retreat exercises, Margaret and Siggy decided to address their issues, and Margaret proceeded to do a spot-on, and hilarious imitation of “Soggy” Flicker: the crying, the whining, the DAMN CAKE!  Siggy was, of course, shocked, angry, hurt, and  crying all over again. I think she should demand a refund on those “butt pellets”. They clearly don’t work.

So that’s a wrap, but stay tuned! it looks like there’s plenty of drama ahead. In fact, we’re in for an early holiday gift, and it’s one that truly keeps on giving…it’s almost time for the Posche Fashion Show!

TELL US – WHAT ARE YOUR THOUGHTS ON THE RECAP & THE LATEST RHONJ EPISODE?