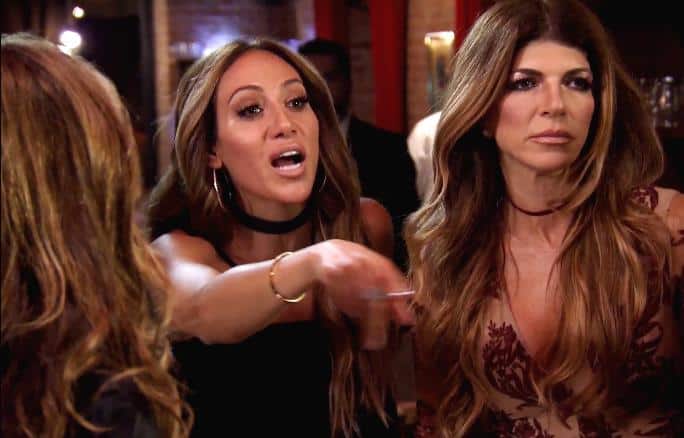 I’ve said it before, and I’ll say it again..when it comes to Reality TV, the Real Housewives of New Jersey is the best. And when it comes to “Bravolebrities”, Teresa Guidice is the G.O.A.T. Stay with me…

When we picked up with the ladies last night, they were still at Siggy’s retreat working out their “issues”. And man, do these ladies have issues!  But Siggy’s retreat had a little something for everybody, and she intended for the ladies to, at least, get to the bottom of their issues with each other.

Somehow, Siggy thought role playing, and seeing themselves through each other’s eyes would be a good idea. They each got to pick one other person they had a problem with, and reverse roles with them.

It was mainly good natured teasing and low key shade. But everyone got tense when it was Danielle’s turn. They were sure she’d take the opportunity to confront Dolores. But she surprised them all by choosing Teresa. I mean, they’re supposed to be good now, right?

Danielle didn’t role play. Instead she chose to tell Teresa that she was still hurt about the table flipping incident and that Teresa had called her a “prostitution whore” in front of her daughters.

Danielle said her daughters had been hurt, and bullied at school because of that scene, and that while she loves Teresa, and wants to be friends, it was still on her mind.

Ok..that’s fair. That dinner got pretty ugly, and Danielle’s daughters were young, and witnessed the whole thing.  But let’s be real, Danielle was humiliated by Teresa…more than once. And she didn’t go to all the trouble of coming back to NOT kick Teresa when she’s down.

But Teresa fell for it. She’s been through a lot. She’s a little off her game. She apologized for hurting Danielle, and even agreed to speak to Danielle’s daughters, and apologize to them directly.

It’s a nice gesture. But Dolores is especially suspicious, and thinks Teresa is crazy for letting Danielle back in.

We found out a lot about Teresa’s relationship with her husband, Joe, too. She’s angry with him, and for good reason. She went to jail for his crimes (Supposedly..Don’t think for a second that Teresa’s as clueless as she pretends to be).

The year she spent in prison was especially devastating because of the time she lost with her mother, who passed away shortly after her release.  But let’s be honest: Joe Guidice was a crappy husband long before the fraud charges. He called her names, drank to much, was always in the tabloids with other women…the whole bit.

When the ladies asked if Joe had ever apologized to her for all she’d been through, her only response was “no marriage is perfect”. So, that would be a no. But hey, maybe Teresa is starting to enjoy life without Joe. She confided to Siggy that she hadn’t seen him in three months.

She wanted to visit him, she explained to Siggy. Of course, she did, but she’d been so “busy” with the girls’ “activities. Translation: let his ass rot!

And is it possible that Teresa could be the one doing the cheating these days? Kim D. seems to think so.

Oh yes! It’s time for the Posche Fashion Show…truly the most wonderful time of the year for any Jersey fan.  Kim D. asked Siggy and Dolores to walk in the show, and both agreed, despite knowing that Teresa, Melissa, and Danielle hate her.

When Siggy and Dolores went to the store to get fitted, Kim D. told them that Teresa was always out at the clubs, and was “rekindling old flames”!

Siggy and Dolores were shocked, and immediately jumped to Teresa’s defense.  Dolores told Kim D. that Teresa didn’t even have any old flames, since she and Joe had been together since they were kids.

Siggy said she didn’t want to hear baseless gossip, and that this was precisely why Teresa and Melissa dislike her.

At the last fashion show, she was spreading rumors about Joe cheating on Teresa. A few years ago, it was that Melissa had been a stripper. Of course, Teresa was in on that one. But, really, why split hairs?

Kim D. said that EVERYONE knew about Joe’s cheating, and that she was just saying out loud what everyone else was thinking. She also said that she didn’t blame Teresa for what she was doing, but that she WAS doing it. Every bit of this was said with a Botox-defying, cat that ate the canary grin.

When Siggy and Dolores met the others for dinner later, Siggy told them that she and Dolores would be in the fashion show. HUGE mistake.

Now, you know Teresa and loyalty. Just being her friend is not enough. You must never cross her, and most importantly, you must hate who she hates. It was bad enough for Siggy and Dolores to be going to the show, at all, in Teresa’s mind, the two of them also walking her runway was a bridge too far.

Dolores chose that moment to tell Teresa what Kim D. had said about her. It went as expected.  Teresa yelled at Dolores and Siggy for not defending her. They insisted that they had, and Dolores asked, “when’s it gonna be enough”? Oh, sweet, sweet, Dolores…it will never be enough!

And then it happened…in the heat of the argument, Dolores uttered the words, “if it’s true….”  Get with it Dolores! You know that’s another loyalty test of Teresa’s. You must never suggest that she did what people say she did…not even if it’s a federal judge.

Teresa WENT OFF! She threw her glass, stood up from the table, pushed her chair, screamed at the top of her lungs about picking sides and sticking with your friends.

Siggy and Dolores again tried, in vain to explain themselves. They said the fashion show was for charity, and that Kim D was their friends too, and who was Teresa to tell them what they could and couldn’t do anyway?!

Melissa piped in to inform them that they were not in Switzerland, and that “in Jersey, you need to pick a side”.

Dolores and Siggy stormed out, but Teresa, Melissa, Margaret, and Danielle, who’s been loving every moment of this, calmly retook their seats, and continued talking about them.

Teresa then told them that she intended to go to the fashion show, after all, to confront Kim D. about her lies. Melissa tried to be the voice of reason, but Danielle was having none of that, and chimed in with the master plan…”we go in there, do what we gotta do, and get out”.

Well, that escalated quickly! And then another loyalty test from Teresa: “you’re coming,” she said to Melissa, “you’re my family, and you’re gonna stick by me. You’re coming”.

This was not a request. Melissa’s in. Margaret is too, and she’s super psyched about it, too…”I’ve never been part of a shakedown before!”

See?! The best! Where else can you find this type of intrigue in reality TV?! And what other reality star would openly threaten someone in front of an audience of millions…especially if that reality star is a felon. THAT my friends, is commitment to your craft.

Stay tuned, it only gets better from here. And here’s hoping Teresa’s parole officer doesn’t watch Bravo…the show’s nothing without her.

TELL US – WHAT ARE YOUR THOUGHTS ON THIS RHONJ RECAP AND EPISODE?