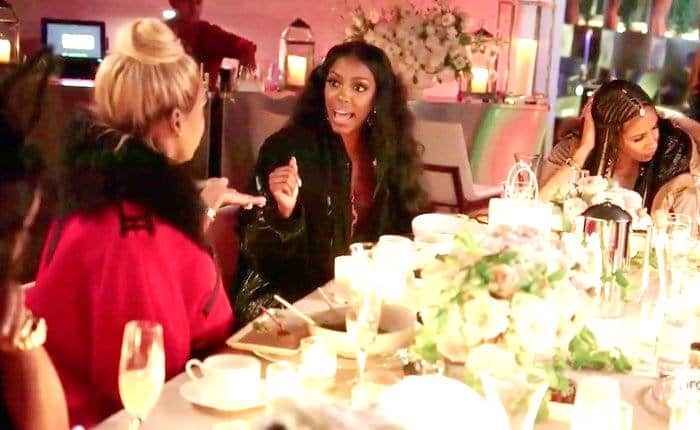 Let’s dive right into this recap for the latest episode of the Real Housewives of Atlanta.

In Sheree Whitfield’s tagline, she likens herself to a “bad server”, because she “always spills the tea”. But that’s not the best analogy. It implies ineptitude, a lack of grace. Most importantly, it implies a lack of intent. To the contrary, Sheree’s a quarterback. And she’s an all-star. She rarely scores herself, but makes the pass, threads the needle, as they say, and quite accurately and deliberately, places the drama directly into the hands of the one who can carry it in for the win.

How, you ask? Just watch her work:

When we picked up with the ladies last night, they were still at NeNe’s “All White Never Forget Party”, and Kenya and Kim were still mid-fight. Kim threw a glass of wine at Kenya because of her comment about Kim “pimping out” her daughter “for John Legend tickets”.

Harsh? Sure. Everyone can agree that kids are off limits, right? Except that Kim DID send a tweet asking who her daughter, Brielle, “had to blow” for the tickets, so it can be argued she left herself wide open to this.

Also, Kenya’s comment wasn’t really a shot at Brielle. She didn’t call her a prostitute. She called Kim a pimp. A small distinction, I know, but still. Besides that, Kim did start the argument when she said that Kenya’s marriage was fake.

After the glass was thrown, Sheree quickly came to Kim’s rescue, ushering her out of the room, and into the arms of her husband, Kroy, who wisely suggested that they just leave. Sheree then suggested that the three of them go to Porsha’s house, since she lives in NeNe’s neighborhood.

Now, Porsha wasn’t invited to NeNe’s party, so she didn’t really NEED to know what went on, and she and Kim were never close, but the ball needed to move down the field, and Sheree needed someone to carry it.

Sheree and Kim proceeded to fill Porsha in, and Kim decided to add an embellishment to the story. She said that Kenya mentioned her “injured son” during the argument. Unless the footage is on the cutting room floor at Bravo, this never happened.

To be fair, Kim did mention her son, Kash (who recently suffered severe injuries after being bitten by the family dog) in the tweet, and could have conflated the two.

But Kenya didn’t say it, and while Sheree admitted that she “didn’t remember” hearing it, that didn’t stop her from repeating this version of the story to Kandi when she went to her studio to invite her to San Francisco. 10 more yards!

In fact, Kandi was reluctant to make the trip at first..she’s busy, she hates Porsha…but after hearing that Kim had been invited, and would surely reignite her feud with Kenya, Kandi assured Sheree that she “wouldn’t miss it for anybody”. It was all set. And Sheree was “determined for it to be a positive trip”. Yeah, right! That’s not how this game works.

The trip got off to an awkward start immediately. Porsha tried to speak to Kandi at the airport, and was completely ignored.

When it was determined that NeNe and Kenya would be late, and that Kim wasn’t coming at all, Porsha said “well, we have all we need”. Kandi responded that if it were up to her “one more could be missing”.  It wasn’t subtle. But Porsha knows what she did, so she ignored the slight.

Later, on the way to the hotel in San Francisco, the single ladies of the group discussed their love lives, and Porsha said she hadn’t had sex in five months. Kandi found this hilarious! She burst out laughing..loudly. Well, she cackled is what she did. Again, Porsha largely ignored it.

But the truly incredible part of the ride was when everyone finally got a little tea on Sheree…and she volunteered it. This is a rarity. She doesn’t often run the ball. It turns out that Sheree is in love…with a man named Tyrone…who’s in prison.

But, alas, it is true. Tyrone was someone that Sheree dated on and off. And while they were off, he was sent to prison, but they since rekindled the flame, and she feels that he “gets” her.

The other ladies were stunned, especially NeNe, who also knows Tyrone somehow, and doesn’t exactly have warm feelings for him. In fact, according to a clip from season 2, shown during last night’s episode, Tyrone, and his gossiping about NeNe, caused that epic blowup between NeNe and Sheree, during which NeNe inexplicably bragged about her “Trump Checks” from Celebrity Apprentice.

After recovering from that bombshell, the ladies got ready for their first night out in San Francisco.

One look at Sheree, first to arrive at the restaurant, and seated at the head of the table, should have tipped everyone off: she hadn’t bothered to change for dinner. The other ladies had spent the better part of two hours primping, preening, and stuffing donkey booties into latex, but Sheree was still in the sweats she wore on the plane.

How odd. How unlike her. Was she just not up to the fuss after the long trip? OR, did she have some reason to think that dinner would be cut short, and therefore, chose not to bother? I’d say it was the latter, because no sooner did the ladies get settled in their seats, than Sheree announced that it was time to “talk about the elephant in the room”.

“NeNe had a party”, she began, “and Porsha wasn’t invited. Let’s talk about why”.  The bold Hail Mary pass! Few can pull it off, and it only works with an equally talented receiver. But when it does work, it’s a thing of beauty…a ballet.

Sheree released the ball, and the other ladies stopped cold, held their collective breath, mouths agape, but silent, as they watched the play unfold in front of them. But NeNe, as always, was wide open. She caught the ball, and ran toward the end zone, stiff arming anyone in her path.

The fight that ensued was mainly a cacophony of unintelligible over talking.  But the gist was that Porsha felt that NeNe had tried to get her fired based on comments NeNe made during an interview on Watch What Happens Live.

NeNe told Andy Cohen that “Freak and Fraud”, which Porsha correctly assumed was a reference to herself and Phaedra, “should be gone” because they were “de-classing” the show.

It’s funny because NeNe thinks the show was classy before Porsha.  NeNe denied trying to get Porsha fired, but conceded that she did feel Porsha “deserved discipline” for what she and Phaedra did to Kandi.

Porsha wanted to know why NeNe was bringing up Phaedra, and fighting Kandi’s battles, when this was between the two of them.

NeNe maintained that she’d always had Porsha’s back until that point, even after her physical altercation with Kenya, and that she was the reason Porsha was still on the show.

They went back and forth in this way for several minutes, until the entire exchange devolved into the two of them yelling “F**k you”…”No, f**k YOU” into each other’s faces, and Cynthia and Kenya finally dragged NeNe away from the table. Touchdown!

See?! Sheree’s a pro. Smart too. They weren’t at that dinner more than 15 minutes, and Sheree wasn’t putting on a full face of makeup, and squeezing into Spanx for that!

TELL US – WHAT ARE YOUR THOUGHTS ON THE RECAP AND EPISODE?