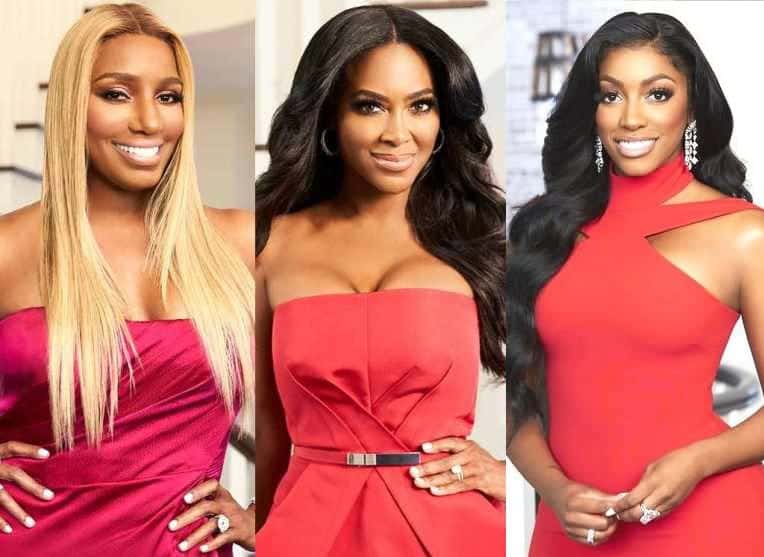 Real Housewives of Atlanta fans saw Nene Leakes and Porsha Williams get into a very very loud screaming match on the latest episode of show during a cast vacation to San Francisco.

The ladies’ issue stemmed from the fact that Porsha accused Nene of trying to get her fired, something which Nene vehemently denied despite her appearance on Watch What Happens Live earlier this year during which she mentioned Porsha’s name when a viewer asked her who she would like to see off the show.

Fast forward to today and  Kenya Moore is now revealing that Nene definitely helped Porsha keep her RHOA job at some point when Bravo was looking to fire her.

“I remember when there was a time where Porsha was not returning to the show, and NeNe and Kandi all spoke up to help her keep her job,” Kenya told E!’s Daily Pop. “That’s a little tea you might not know about. That’s what NeNe was referring to at the dinner, that she didn’t help her get her job, but she definitely helped her keep it by championing for her.”

This seems very believable because there have been at least two separate occasions when it was rumored Bravo wanted to fire Porsha but she somehow ended up keeping her job. The first instance was after she violently attacked Kenya at a past reunion, and the second time was after she got into two fights during one season — once with Cynthia Bailey and the other time with her friend who is not a RHOA cast member.

As for Nene, she is also speaking out on the latest episode of the show as she accuses Kim Zolciak of purposely starting trouble to get a reaction out of Kenya, and states Porsha is not being truthful when it comes to what caused a rift in their friendship.

Below are excerpts from Nene’s Bravo blog–

BravoTV.com: What was going through your mind after Kim and Kenya’s big blowout?

NeNe Leakes: After Kim and Kenya’s blow up, I was thinking, “Stay calm, NeNe.” Now, I know for sure had I broke anything in any of these girls’ home, I would have been called every name in the book! Kim wanted a reaction out of Kenya, and she got one — just not the one she wanted.

BravoTV.com: What did you think when Shereé opened up about her new man?

When Shereé opened up about her man, I was surprised but not surprised! I knew she’d been in a relationship with him for years. Um, remember the blow up she and I had? She was just getting to know him at that time, but chose to believe him over me! I wonder if she believes he’s innocent now…SMH.

BravoTV.com: Were you surprised that things escalated so much between you and Porsha at the dinner?

I wasn’t surprised things went left between me and Porsha — we hadn’t been on the same page in over two years! But what I am surprised about is the fact that she’s making the fallout about my appearance on #WWHL, which is far from the truth.

TELL US – ARE YOU TEAM NENE OR TEAM PORSHA?