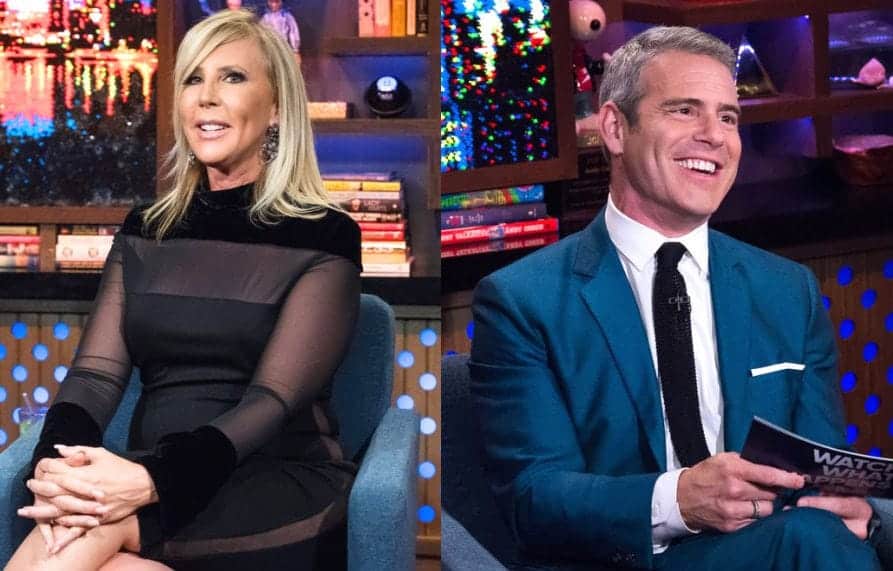 In today’s surprising news, Vicki Gunvalson is shutting down Bravo host Andy Cohen over some claims he made about her.

This is all related to the Real Housewives of Orange County reunion and the claims that Vicki’s health scare in Iceland was caused by her ingestion of prescription pills offered to her by BFF Kelly Dodd.

This led to Andy’s tweet which accused Vicki of being on a cocktail of drugs during the cast trip. Andy tweeted, “Vicki on an adderol and xanax AND NyQuil in Iceland!!?!??!?!?! NOW we know!??!?!? #RHOC”.

Vicki didn’t seem to take too kindly to that as she tweeted back to him: “Not true @Andy .”  A screenshot of that exchange is below –

No word on why it took Vicki almost two weeks to respond to Andy’s tweet. Vicki’s tweet is also puzzling because she appeared to laugh along with Andy when he joked about her being high in Iceland during the reunion, and did not deny the claims that she took the pills.

Vicki also denied drinking during the trip after a fan tweeted that the RHOC ladies consumed too much alcohol. She responded to the fan saying, “I didn’t drink at all.”

I didn’t drink at all

This comes weeks after Kelly revealed in a podcast interview that she gave Vicki ‘Adderall and Xanax’ in Iceland and claimed the drugs were what led to Vicki being rushed to the hospital amidst fears that she was having a heart attack.

As for Andy, he has yet to respond to Vicki’s tweet.

TELL US – WHAT ARE YOUR THOUGHTS ON VICKI AND ANDY’S TWEETS?