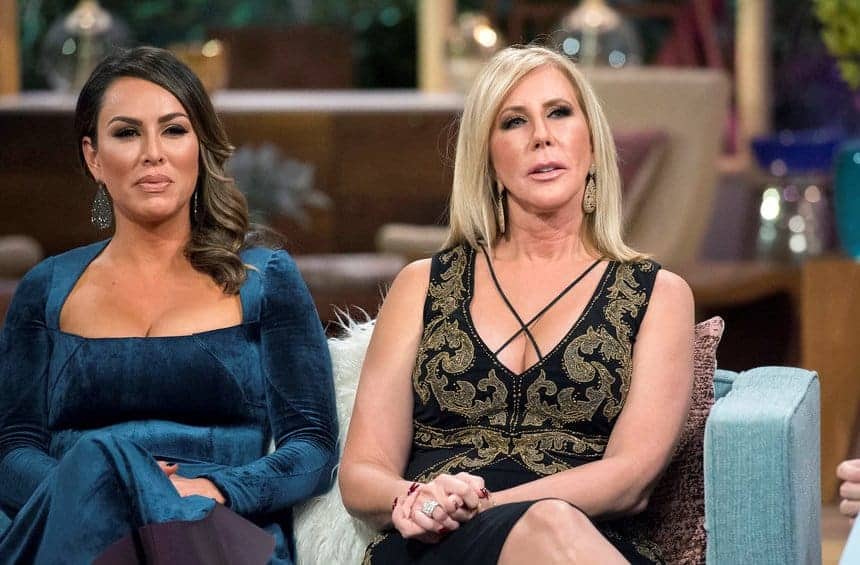 Real Housewives of Orange County star Kelly Dodd is spilling it all in a new interview!

The Bravo housewife recently appeared on Heather McDonald’s podcast during which she didn’t hold back when it came to her RHOC castmates.

First Kelly was asked about Lydia McLaughlin and she gave a surprising answer saying she liked Lydia while adding that no one else on the cast does! Yikes.

“Lydia the fairy?” joked Kelly when asked how she felt about Lydia on the Juicy Scoop Podcast. “No one likes Lydia, but I have to say she is probably the best. She is the best. She is just genuinely like a nice good person.”

Kelly also had some nice words to say about Lydia’s mom Judy Stirling. “Oh she’s awesome. She gets high all the time,” said Kelly. “She rolls up her own joints. It’s great. I want Judy on.”

Peggy Sulahian however wasn’t so lucky. “Nobody could deal with that,” said Kelly when the topic turned to Peggy.

The juiciest part of the interview came when the cast’s trip to Iceland was brought up along with Vicki Gunvalson’s now infamous health scare during which she was rushed to the hospital in an ambulance due to fears she was having a heart attack. Kelly shocked viewers due to her nonchalant attitude during the entire fiasco. It turns out she had good reason as Kelly revealed the real reason Vicki wasn’t feeling so well was because she had popped an Adderall pill earlier that day!

“That’s because.  Well no one knows this. This is behind closed doors. I do have ADD… Vicki and I, we didn’t sleep for days. So I said here have an Adderall. So I give Vicki an Aderall. She goes ‘I’m having an heart attack’. I go ‘no you’re not b***h,’ you’re just having an anxiety attack!” continued Kelly.  “And then I go okay, I have a Xanax.”

“I knew she was fine. I was hungry,” she added of why she chose to eat over visiting Vicki at the hospital.

The reunion preview shows host Andy Cohen asking Vicki about being high so perhaps this will be addressed on the reunion as well.

Kelly was later asked which housewives from any franchise needed to go, and she made it clear she feels Peggy and Meghan King Edmonds have worn out their welcome on the RHOC.

“Peggy. Meghan, the boring a** b***h that she is,” snarked Kelly when revealing which housewife Bravo needs to fire next season.  She also repeated her claims that Meghan is faking owning her candle business and that a friend of Meghan’s is the actual owner.

The topic also turned to Heather Dubrow, who Kelly recently got into a tiff with after making slanderous comments about Dr. Dubrow’s practice.

Kelly surprised the audience once again when she actually said nice things about Heather, who recently called her a “stupid woman.” The niceness didn’t last long however as Kelly also referred to Heather as being “pretentious.”

“I think Heather Dubrow might come back. I see her every morning at the Orange Theory,” Kelly revealed adding that she runs into Heather almost daily at their local gym.

“Don’t you have a private gym with private trainers?” asked Kelly. “I like Heather Dubrow. I think she’s cool. She’s very kind. I just think if you have access to those kind of things like why are you at the Orange Theory? And you’re so pretentious and you’re so above everybody.” Okaaaay.

Finally, Kelly also revealed another interesting tidbit when casting for the show came up. She shared that she was actually interviewed years ago by Bravo,, but the network ultimately hired Lydia over her for the 8th season back in 2013.

“They ask everybody in Orange County to interview for the show. It’s just where you live. Who you know. It’s everyone actually,” said Kelly about how casting works. “They [interviewed me] twice. And they picked Lydia over me when she was on there first. Yes. I did the whole interview. The whole thing.”

TELL US – THOUGHTS ON KELLY’S INTERVIEW? SURPRISED VICKI POPPED AN ADERALL? DO YOU WANT TO SEE PEGGY AND MEGHAN GONE?