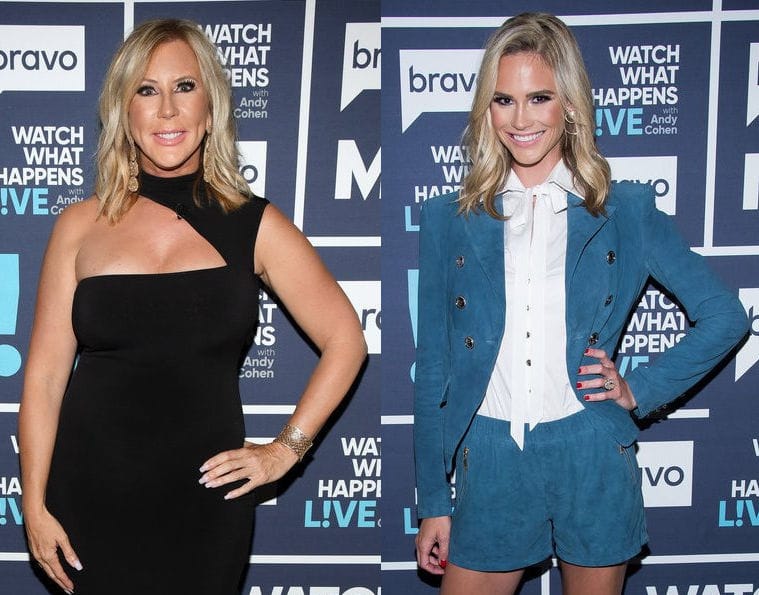 In today’s random news, Real Housewives of Orange County star Vicki Gunvalson is stating it’s time for her castmate Meghan King Edmonds to leave their show and go back to St. Luis! Yes she really went there.

In a new interview, Vicki, 55, reveals she has “no desire” to see or talk to Meghan, and questions why she’s even on the RHOC to begin with.

“No desire, truly no desire to see her. She lives in St. Louis, I don’t even know what she was doing on our show anyway,” said Vick to Us Weekly in an interview from Tuesday, December 12.

“She lives in St. Louis, she’s pregnant, she has her husband, they’re going to have six kids, she’s not friends with anybody. I don’t know what the correlation with her is. She’s socially friends with people, but we don’t all hang out together,” continued Vicki.

Vicki didn’t end there as she then added that she thinks it’s time for Meghan to exit the show! Whoa.

“I think it’s time for her to turn the chapter to something else and maybe not be our show, we’ll see,” she added.

One has to wonder what the heck happened behind the scenes, and where is this coming from? As the ladies appeared to get along during the season. Vicki’s comments comes two weeks after Meghan revealed she was pregnant with her second child with husband Jim Edmonds. Jim has four kids from his previous marriages.

You also have to wonder if perhaps this is Vicki’s attempt to get Meghan fired from the show. A report from last week revealed Bravo planned to bring back Meghan while Lydia McLaughlin and Peggy Sulahian were reportedly getting fired.

In this interview, Vicki praised her friendships with Lydia and Peggy. “It’s good, they’re easy friends,” said Vicki. “I never have to worry about backstabbing or conflict and they’re good people.”

When it comes to her reconciliation with castmates Shannon Beador and Tamra Judge, Vicki had much kinder words as she revealed they are in a much better place today.

“It was so nice to make up, it’s so good,” she said of the reunion reconciliation. “It’s the holidays and it’s gotten us busy and we’re never going to be the same as we were before, but we are definitely in a better place, a great place. I don’t want to go backwards anymore. They hurt me, I hurt them and nobody benefitted. We just have to move on now.”

TELL US – WHAT ARE YOUR THOUGHTS ON VICKI’S COMMENTS? DO YOU WANT TO SEE MEGHAN OFF THE SHOW?