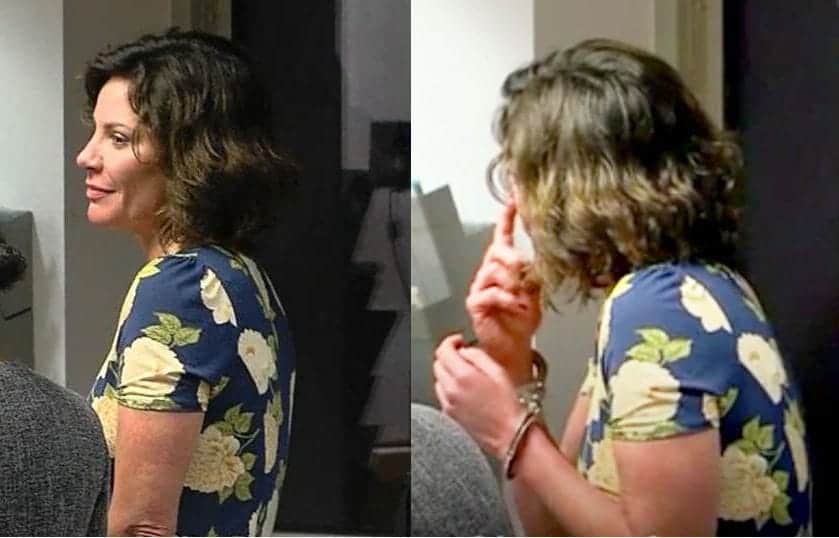 Two days following the shocking arrest of Luann de Lesseps on Christmas Eve, more details are now coming about what led up to the Real Housewives of New York City star being charged with four crimes – three of which are felonies.

First, a new video (posted below) has emerged showing Luann, 52, wearing handcuffs during her court appearance. Above are photos from that video.

And thanks to that video, courtesy of NBC News, we have more details on what went down early Sunday morning that led to charges of battery on a law enforcement officer, resisting arrest with violence, disorderly intoxication and corruption by threat.

The state attorney is heard telling the judge in the video: “She did slam a door on an officer’s face. She kicked an officer. She said, ‘I’m going to kill you all.’”

The judge is then heard telling Luann, “I don’t know if you have a drinking problem, but stop drinking. That seems to be the problem here.”  Luann appeared to nod her head in agreement before the judge warned her not to speak to avoid incriminating herself.

Even more disturbing, a Daily Mail article about the arrest describes Luann as appearing in court wearing a “soiled dress.” Fingers crossed that they mean soiled with alcohol and nothing else.

As we reported, Luann did issue an apology following her arrest in which she blamed her short-lived marriage to Tom D’Agostino for her drastic breakdown.

She said in a statement: “I want to offer my most sincere apologies to anyone that I might have offended with my behavior. This was my first time in Palm Beach since my wedding and being here brought up buried emotions. I am committed to a transformative and hopeful 2018.”

Luann married Tom in Palm Beach, FL — the same city of her arrest — on New Year’s Eve 2016. The couple ultimately split after just 7 months of marriage.

Luann was released the same day without bond and is due back in court on January 25.

TELL US – WHAT ARE YOUR THOUGHTS ON THE LATEST DETAILS ABOUT LUANN’S ARREST?