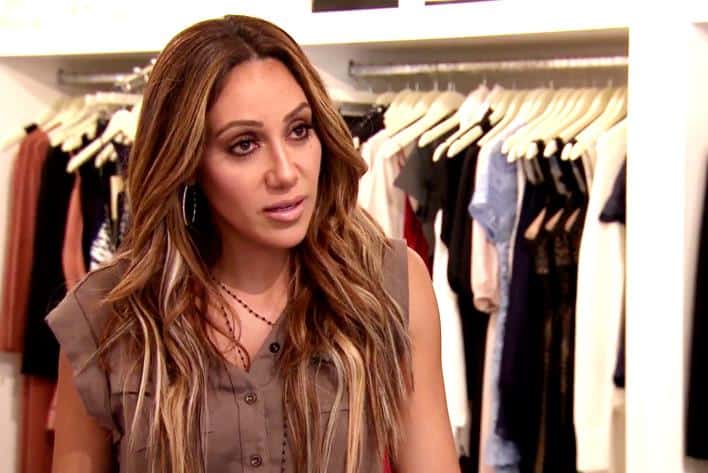 So, another new year is upon us. Time to reflect, look forward, and leave some things, and maybe even some people in the past.

I know one person I’ll be happy to leave behind, and that’s Siggy Flicker. I truly hope the reports of her leaving the Real Housewives of New Jersey are true. Siggy never was a great fit in my opinion, and she never brought much to the show but a constant stream of tears.

When we left off with the ladies, they were still in Milan, and it seemed that both Siggy and Margaret were ready to move on from their argument. But Siggy never moves on…from anything…ever.

In last night’s episode, Siggy told her father all of the sordid details of her ongoing feud with Margaret. This poor man has never even met Margaret, and frankly he seemed bored by all the “she said/she said”. But still, he listened. He told Siggy that he wouldn’t go so far as to call Margaret an anti-Semite, based solely on her Hitler reference, but agreed that it was in poor taste.

Mr. Flicker also pointed out  that if Margaret’s intention was to turn Siggy upside down, she’d succeeded, and that perhaps Siggy should just avoid engaging with her beyond pleasantries.

Well, Siggy clearly took this advice to heart (and then some), because when they both showed up at the grand opening of Gorga’s restaurant, Siggy not only blatantly ignored Margaret, she also refused to meet Margaret’s mother, Marge Sr.

Everyone agreed that it was just plain rude to be disrespectful to the older woman. Even Dolores, who usually agrees with everything Siggy does. But Siggy insisted there was no reason to meet the mother when she doesn’t get along with the daughter. Siggy also claimed that she didn’t want to be “ambushed again”. Ambushed. This woman is the queen of overreacting.

Margaret was pretty shocked by Siggy’s behavior, as well. After all, Siggy had just enthusiastically accepted Margaret’s invitation to her upcoming birthday party. But Margaret has bigger fish to fry. She is currently estranged from her step children, who are still angry with her for leaving their father for her current husband, Joe.

Margaret met with her ex husband, Jan, and the two discussed the situation. Jan seems like a good guy. Quiet, kind, VERY forgiving. He said that while he resented what Margaret had done, he didn’t hold it against her. It’s easy to see why his children would be protective, and angry at anyone who would hurt him, but he told Margaret that there’s “always hope”, and that he always lets his kids know that she asks about and misses them.

Dolores also had an interesting conversation with her ex, Frank. I think we probably all saw this coming (like a freight train), but it looks like Frank and Dolores may be on the road to a reconciliation. The two were walking their dog, and Frank asked if Dolores’ boyfriend, David, truly appreciated her, because he knew that he hadn’t, and now regretted it.

Dolores was pretty casual about it, but it’s obvious that she’s still in love with the man. Dolores insisted that her relationship was fine, but that she was frustrated with how much time her boyfriend spent at work. She said that she’s starting the second half of her life, and really needed to decide who she wanted to spend it with. Frank assured Dolores that no matter what, she’d always have him.

Speaking of ex husbands, could Teresa and her husband, Joe Guidice, be the next reality couple to fall victim to “the curse”? Seems like it’s a definite possibility. Teresa has evolved over the last couple of seasons. She’s grown up. She’s cutting the fat. And whether he knows it, or not, “Juicy Joe” may be next on the chopping block.

Teresa’s been uncharacteristically vocal about her feelings about Joe this season, and it doesn’t sound good. Teresa said that Joe has never apologized for the position he put their family in, and it’s clear that missing time with her mother while she was in prison is still heavy on her mind. Couple all that with all the rumors about Joe’s infidelity, and the shocking rumors that SHE’s now cheating on HIM, and well…the writing may be on the wall.

She wrote a book about all of it, talked about it on the show, but still hasn’t fully expressed her feelings to Joe. That will come next week when she visits him in prison….for the first time in three months. But Teresa’s other relationship are flourishing. Even her friendship with Danielle seems genuine.

Last night, Teresa made good on her promise to speak to Danielle’s daughters about the effect her fights with Danielle had on them. If you recall, Danielle’s daughters, ages 9 and 16, at the time, were present for the epic Table Flip/“Prostitution Whore” Battle of 2010.

In their defense, Teresa and the other ladies did not start the argument…Danielle did. The ladies also suggested that Danielle send her daughters out of the room, but she insisted they stay. All the same, Teresa took full responsibility, and was very genuine when she apologized to Danielle’s daughter Jillian, now 16.

Teresa was also very understanding with Melissa. This was really surprising, and proof positive that Teresa has really changed.  Usually the sisters in law have a pretty contentious relationship, but this season we’ve seen them come together, and really act like family.

This new found sisterly bond may be due, in part, to the fact that Melissa has gotten a little more assertive, and is no longer taking Teresa’s BS…or her husband, Joe Gorga’s.

Joe Gorga is probably the sweetest of all the husbands, but recently he  did something pretty selfish: he bought a restaurant without telling his wife. And what’s worse? He expects her to help him run it!

Melissa made it clear from the beginning that she had no interest in the restaurant business, especially if it involved working with her husband and his sister, who tend to gang up on her. Melissa also has a business of her own to run, and three young children, all of which is apparently not a good enough reason for her lack of involvement in Gorga’s.

Joe was angry with Melissa for taking the Milan trip with just a week to go before the restaurant opened, and hurt when she declined to help plan the grand opening party.

When Teresa arrived just minutes before Melissa, and asked Joe where she was, he told her that Melissa didn’t want to be involved. When Melissa did arrive, the two scolded her for her tardiness and lack of commitment to the business she never wanted.

Melissa told them both where to go, and went to get a glass of wine. I see you, Melissa! It’s about damn time, girl. And Teresa relented. She acknowledged how unfair it had been of Joe to buy the restaurant without consulting Melissa. After all, who knows better than Teresa the importance of a wife knowing all about her husband’s business dealings, am I right?

Teresa even offered to help out at Melissa’s store, if she needed it, as long as Melissa agreed to help out at Gorga’s. Wow! Humility and compromise….from Teresa Guidice! Apparently anything’s possible in 2018.

And stay tuned, next week is already the season finale, and you know these ladies like to save the best for last!

TELL US  – WHAT ARE YOUR THOUGHTS ON THE RHONJ RECAP & LATEST EPISODE?