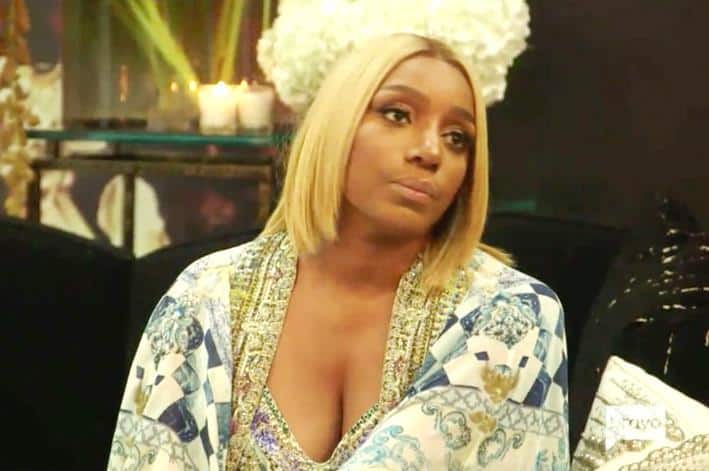 Happy New Year,  Real Housewives of Atlanta fans! It’s been three weeks since we last saw our favorite Georgia peaches, and while they’re always juicy, in  last night’s episode, they were pretty sweet, as well.

When we last saw the ladies, there were some hard feelings among some, but they all chose to put the pettiness aside for a good cause.

The ladies’ friend, Shamea also lent her voice to the project, and, through tears, told the gut wrenching story of how an ex boyfriend once hit her so hard, he literally knocked her out of her shoes.

Cynthia had never been in an abusive romantic relationship, but grew up witnessing her father’s violence outbursts. Cynthia’s mother, Barbara Morris, talked about the abuse in detail, and when she described once grabbing a knife to defend herself against her own husband, there wasn’t a dry eye in the house.

The other cast members also helped out, and the finished result is sure to enlighten and inspire countless people.

While Marlo wasn’t involved in the PSA, she did do her part to increase the peace among her friends.  Marlo and NeNe have been inseparable since they started speaking again, and Marlo convinced her that it was time to talk things out with Porsha.

Porsha considers Marlo a close and trusted friend now too, and although that sentiment seems to be  based mainly on Marlo informing Porsha that she had a booger in her nose, Porsha agreed to the meeting, as well.

Hopeful that a fun and fanciful event would lead to a reconciliation, Marlo hosted a  “tea party”, and kept it small, inviting only NeNe, Porsha, and Cynthia.

In an attempt to keep things light and friendly, she also swapped out the tea for vodka and cranberry juice. And it all started out well…

NeNe and Porsha greeted each other warmly, with hugs and air kisses, but once NeNe broached the subject of their rift, things took a turn. Both women were angry and hurt. Porsha, because she felt that NeNe’s remarks about her on “Watch What Happens Live” were an attempt to get her fired from the show.

NeNe has repeatedly denied trying to get Porsha fired, but admitted to feeling that Porsha’s actions toward Kandi last year should have had consequences. NeNe also said that she felt that she had been a supportive friend and confidant for Porsha while she had been “down and out”, following  her divorce, but that once Porsha was “back up”, she’d dropped her.

Porsha insisted that NeNe had it all wrong. After all, she pointed out, she’d traveled to see NeNe perform on Broadway, and had tweeted her support for NeNe while she was doing “Dancing with the Stars”.

NeNe didn’t quite agree that sending tweets and coming to shows was a true show of friendship, and recalled times that Porsha hadn’t even returned her phone calls. Porsha insisted this had only happened twice, and apparently NeNe didn’t agree with that either, because communication pretty much shut down from there.

NeNe said “fine, whatever you say”, made her usual over the top faces, then picked up her phone, and began scrolling.

Porsha said that everything about NeNe’s demeanor said that she didn’t care, and that there was obviously nothing left of their friendship. On this point, NeNe did agree.

The ladies were actually pretty adult about the whole thing this time, and while Marlo declared them horrible houseguests, as they sat across from each other, avoiding eye contact and sucking their teeth, they DID manage refrain from cursing or throwing things. So, that’s something, right?

We also saw the single cast members continuing their first tentative steps toward dating after ending relationships. Sheree is still with her “prison BAE”, Tyrone, and is excited at the possibility of his upcoming release. Sheree wasn’t so excited to hear from Kandi that NeNe had been talking about Tyrone behind her back, telling the others that he was a “con artist”.

Sheree surely expected doubters. The ladies seemed as surprised by the idea of her “dating” a man in prison as the audience was, but she felt recriminations from NeNe were pretty hypocritical considering that “NeNe and Greg both have mug shots”. Well, I guess that’s settled! (It’s NOT..stay tuned!)

It seems Porsha may have found a possible love connection, as well, in her “Dish Nation” co-host, Ricky Smiley. While Porsha said she was hesitant to mix business with pleasure, the two are clearly smitten with each other. When Porsha and Ricky greeted each other at the start of the work day, they were like a couple of puppies…giggling, smiling, even sniffing each other.

Cynthia has a little puppy love of her own, Will. The two make a striking couple, and it looks promising. She even talked to her daughter, Noelle about meeting him soon.

So, yes, we saw a much sweeter side of the ladies last night, but it doesn’t look like it will last.

Scenes for next week’s episode show the ladies visiting a medium, who must be pretty talented, because it looks like she manages to resurrect ALL drama between these women.

TELL US – WHAT ARE YOUR THOUGHTS ON THE RHOA RECAP AND LATEST RHOA EPISODE?