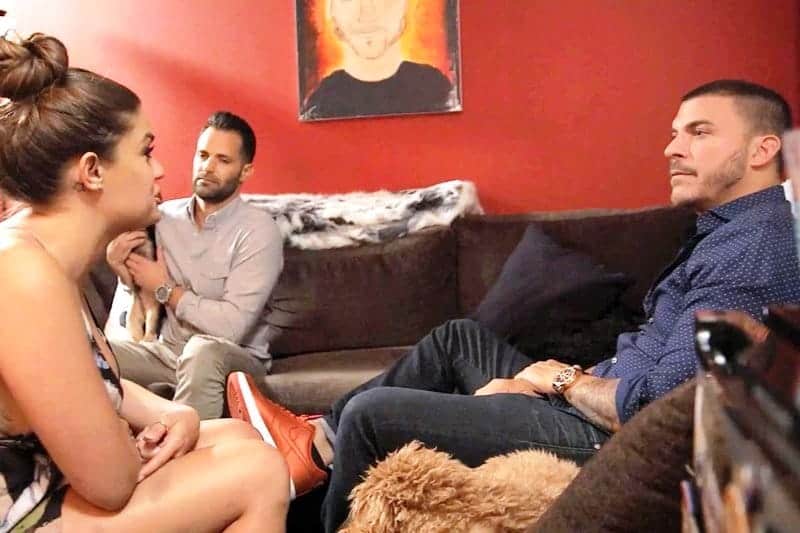 What’s the fastest way to get out of infidelity rumors on Vanderpump Rules? Spread another rumor about yet another friend cheating and then BINGO! #Getoutofjailcard

Over at Katie and Tom’s apartment, the dudes assemble to discuss the latest scandal. The ladies enter and you can tell that it’s gonna be an awkward night for everyone…starting with Jax getting kicked out by Katie. He makes no qualms about exiting on his motorized cooler (??) and I don’t blame him for GTFO-ing. Katie begins laying into Schwartzie in front of company and Schwartzie states he has a BIG problem with Katie telling him there’s no more drinking. He basically says, sorry Bub, but that’s not gonna be the case.

LaLa gets welcomed back to the hostess stand ready to take on the day. She gets greeted by Lisa, and LaLa shares that she feels very much “indebted” to her.

While on the shift, Jax and Brittany are enjoying NOT being the center of the rumor mill. Instead of dumping him, Brittany decides that yes, yes of course, it would be a GREAT idea to have a house warming party with her dear roomie, Jax. Brittany believes it is time to move on. Water under the bridge…Wish we could say the same about the LaLa and Katie drama.

Katie wastes no time taking full advantage of LaLa being the new hostess and asks LaLa to come talk to her, because they both deserve a break already. Obviously. Katie figures out that Scheana is a snake- evidently Scheana has reported to LaLa all the mean and terrible things Katie has been saying about her. LaLa shares that she felt her “dukes come up” and Katie, surprisingly, agrees. She also does her best to remain calm as LaLa gives her the dirty details of the Schwartzie hook up, up to and including the fact that he was calling the other chick BUBBA. Ya know, the pet name he has tattooed on his booty cuz that’s what he CALLS HIS WIFE.

The three amigos, Jax, Schwartzie, and Sandoval, decide they need a guy-date and wind up at the ONLY place to go to when you’re accused of cheating on a wife: wine & design…or rather, absinthe & design, because that’s the new hot liquor of the season. #guysnight They share feelings, paint their emotions, and exchange recipes..JK..not really, but I wouldn’t be surprised..while Katie, Brittany, and Kristen throw back shots. Role reversal?

Brittany explains that LaLa has been invited to the house warming AND that Scheana will be there, too. Katie fakes an “I don’t care” expression and states that her and Scheana actually have a lot more in common since rumors are flying that Scheana’s boyfriend is smooching other ladies, as well. Jesus. What is WRONG with these people? I mean, at LEAST be smart about where ya cheat.

I don’t know Scheana’s man, but he doesn’t seem too bright. It’s only a matter of time til the Scheana’s boyfriend rumor gets back to her and then poof, the Katie/Schwartzie scuttlebutt will be history. We haven’t heard much from Scheana this season because she is basically attached to her new boyfriend, Rob. She is essentially planning their wedding. “Dating Rob– I finally feel like I’m dating a man”- Scheana. She wastes NO time diving in to basically pretending Rob is her new husband and the two of them play house and invite Sandoval and Ariana over for a “gorgeous dinner in Beverly Hills.” Rob makes some wack toast and Sandoval is man crushing HARD on him. Scheana confesses that she has a COUNTDOWN app on her phone that tells her when she is officially divorced. Maybe she should share that app with Katie. I think she’s gonna need it.

Ariana and LaLa go shopping together because they are reunited besties. Ariana confides in LaLa that she is “uncomfortable with her vagina” and that she was in a really bad past relationship where she was told she was not good enough. Ariana explains that the newness of the Sandoval relationship has worn off and now she is back to being haunted by her past. LaLa the life coach gives her advice: “I literally talk to every part of my body,” and lets Ariana know that she is perfect.

It seems as though Schwartzie just can’t stay away from LVP. He brings his dogs over to get groomed and gets groomed himself. LVP lets him know that she is “overly concerned about the situation” and Schwartzie yeses her to death and covers his face and acts like a 3 year old. “Schwartzie nearly woke up without a wife. Well, next time it will be without a business partner.” Do not mess this up, Schwartz.

All of Brittany’s girls are there to help her prep the house warming party. The same girls that were there wiping away her tears when she found out Jax cheated.

Speaking of cheating, Kristen dives right in and lets Scheana know that Rob kissed another girl. Scheana states that Rob isn’t a “kisser” and the girls kinda look at the floor and let Scheana live in her fake world. Kristen also informs Scheana that Katie found out the gossip and Scheana believes that it’s “very convenient” that NOW all of a sudden, Rob’s cheating? Coincidence? Sounds like SOMEONE is trying to get the heat off of THEIR cheating scandal. Ah, yes, Scheana. You’re catching on.

But now, now, let’s not allow this to rain on the house warming parade. The party is full of ridiculousness, including “adult spin the bottle” and a cake made of toilet paper since Jax is a piece of s**t. I get it! Once Scheana stops SnapChatting, she begins spilling to Stassi about how she cannot WAIT to start her life over with Rob. #oversharemuch.

The night gets weird, the squad gets wasted, and James and Sandoval rap. The usual. Brittany drunkenly interrupts and starts slurring how she wishes Jax would talk to her about their relationship. James and LaLa are caught in an awkward situation now that they have AUDIO of Jax saying he would never marry Brittany. “Would you rather ruin her night or ruin her life?” LaLa FTW.

The pink ladies, Ariana and LaLa, in their matching denim jackets whip out the Jax audio. Andddd there it is. The absolute proof. “I’ve heard the recordings, you deserve to rot in hell.” Wait, is this real or fake Brittany? Are we gonna have another house warming party next week? Andddd Schwartzie just feels like he dodged a bullet. Like I said, just deflect, deflect, deflect, and hope the newest drama takes center stage. Works like charm.