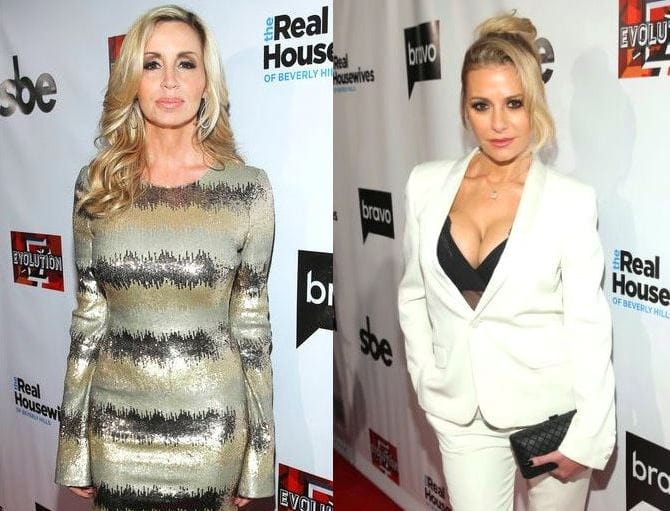 In what can best be described as the feud no one expected or saw coming, the latest episode of the Real Housewives of Beverly Hills brought us Camille Grammer vs Dorit Kemsley!

Or rather was it just Dorit making a you know what out of herself?! RHOBH viewers saw Dorit have one too many drinks during Kyle Richards’ party and for some strange reason she started to yell out insults at Camille, and even went as far as to call Camille a C-U-Next-Tuesday!

Well Camille is now speaking out about her latest dinner from hell (she’s had quite a few of those) as she slams Dorit in her newest blog. Camille refers to Dorit as the “the Duchess of her own universe” and calls her comments ‘rude, controversial and stupid.’ She also shares her thoughts on newbie Teddi Jo Mellencamp.

Below are excerpts from Camille’s Bravo blog –

“It feels good to be back in the fold. I was so happy to join the  ladies in Vegas. We had a blast! The best part was catching up with Kyle, Lisa, and Adrienne. So many fond memories from past trips: Vegas, New York, Hawaii, Colorado, and Ojai. The jokes we shared, the dancing, hair flipping and word play. We have had many belly laughs together throughout the years, as well as hardships. At the end of the day what matters most is that we can cut through the pettiness and drama when it really counts and support each other. Let’s see what happens this year.

In Vegas I was delighted to meet Teddi, the new girl in the group. She is down to earth, fun, and easy going. What a great addition. She brings a fresh perspective being a young mother of two and an accountability coach. We’ll see if she has what its takes to hold some of the ladies in our group accountable. I believe she may. She is the real deal, quite opposite to Madame Dorit Kemsley, the Duchess of her own universe who shocked me by her behavior at Kyle’s dinner party. To drink or not to drink, Dorit—that could be your conundrum.

My first encounter with Dorit was at a luncheon I hosted at my home in Malibu. My first impression was that she was pleasant company until she and Eileen kept going around in circles over an event that happened last year. I have not had the opportunity to get to know Dorit, nor do I want to after Kyle’s dinner party. Since we have had limited interaction, I was shocked when she shouted out, “Camille, you stupid c—!” Really, Dorit?! Are you kidding me?! Who at the table lit the fuse on her tampon?

David, my boyfriend, had arrived at Kyle’s party after work. I was nervous to introduce him to the ladies, because you never know what might happen. He had just finished meeting the group when Dorit starts with the outrageous and inappropriate comments. Why would PK and Dorit ask me to be the godfather if they were to have another child. Bizarre request even if it was a joke. Then she shouted Camille you…blah blah blah. I don’t know why or what prompted her to say this. I barely know her, and I was at a loss for words, so I choose to take the high road and not respond. I also didn’t want to make David feel any more uncomfortable at that very moment. I see that she chose this dinner to humiliate herself in front of my boyfriend. This is the exact reason why I was apprehensive to bring David around this group. Ouch! Was her comment meant to be rude, controversial, or stupid? I enjoy my time with Kyle and Lisa V, but I’m not so sure about their new best friend. So, where do we go from here? We’ll see.”

TELL US – WHAT ARE YOUR THOUGHTS ON CAMILLE’S BLOG & DORIT’S BEHAVIOR?