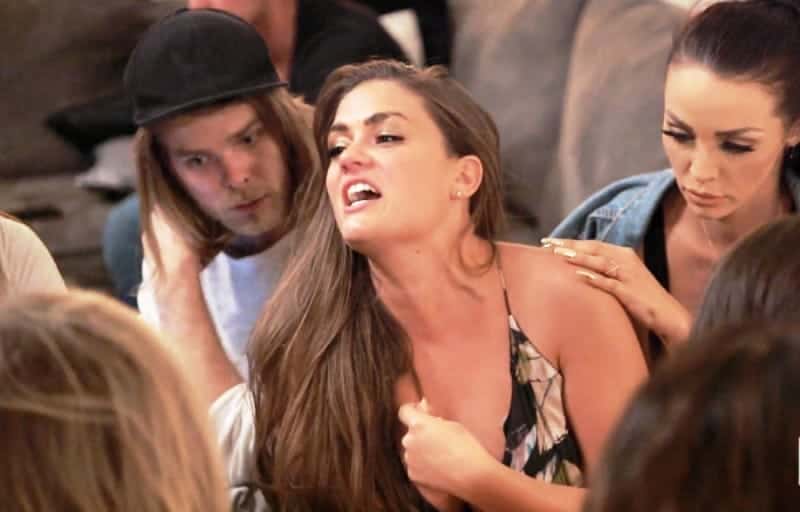 The phrase “mind your own business” means absolutely nothing to the Vanderpump crew…as seen in this episode of Vanderpump Rules.

The audio has been heard and there’s no un-hearing it. Jax has NO idea that the pink ladies were letting Brittany hear the ugly truth. Brittany obviously decides to make it uncomfortable for the ENTIRE party by letting them ALL hear Jax’s statements to Faith. Naturally, Jax loses his temper because someone actually called him out on his own BS, so he leaves his own party with the men posse.

James, pretty much the only guy still left at the party, tries to intervene, but LaLa lets him know that he should back the heck up asap. On the audio, Jax is literally saying everything a human NEVER wants to hear about him/herself. Jax is a legit piece of trash.

FIND OUT WHY BRAVO DIDN’T PLAY THE AUDIO OF WHAT JAX SAID!

Over at Schwarztie’s apartment, the dudes are trying to console a livid Jax who is actually quite frightening. After being screamed at by the ladies, James scadaddles and joins the boys down the hall. The screaming, shouting, and tears is not too much for the girls. I mean there is “artichoke dip” still in the apartment, so there’s no reason at all for the party to end. James, the weasel, lets Jax and the Toms know that Ariana and LaLa were the ones who brought up the audio. “Obtuse” Sandoval is not into the fact that Ariana was in on the outing of the tape and starts his own fight with Ariana. She cannot believe that Sandoval would take Jax’s side over hers and then, wam-o, MORE DRAMA.

James meets with LVP to discuss his wild Tuesday DJ gig-aka- “See You Next Tuesday.” I thinkkkkk “Turn it Up Tuesday” is a little bit more tasteful, but who am I to judge? James didn’t even run the new Tuesday night name past his BOSS, LVP, who took him back after his excessive mess-ups. She eventually allows the name to stay, but it doesn’t take long for Lisa to get James to spill on the Jax/Brittany gossip. James sings like a canary and tells her EVERYTHING, yet states he “did nothing wrong.” Meanwhile, he tells the camera that HE was the one that stole the audio from Faith. Now how does THAT make sense?

Scheana invites Sandoval, LaLa, and Ariana over for breakfast to discuss the Faith tape issue. Sandoval still thinks that “it was in really poor taste” for Ariana to share the information with a super drunk Brittany the night before. Ariana gets emo and the fight escalates in front of other people, which is NEVER awkward at all. It even gets to the point where Ariana says, “why don’t we just break the f*ck up?” How bout that, Sandoval?

In a scene eerily mirroring Sandoval vs. Ariana, Jax states “he has no words” and “there’s no excuse” for Brittany listening to that audio tape. He also tells her to “take responsibility for her actions.” Hello Pot, meet KETTLE. Jax is trying to blame Brittany for their relationship woes and claims she has gone “below the belt.” I can hardly handle the way that Jax is trying to make Brittany look AND the way he talks to her. It’s time for SOMEONE to step in and tell these girls that these BOYS are not worth their time and effort.

“Professionally, my DJ career is taking off”- James, the Tuesday night DJ. James fights through his hangover and brings LaLa and trumpet-tooting Sandoval to record with Andrew, the sound engineer. LaLa rocks it cuz she is actually talented, but Sandoval on the other hand…. Sandoval states, “Every time I pull out my trumpet, it’s an expression of my feelings.” And, exactly what KIND of feelings are you trying to express here?! Feelings of terror? LaLa shares that “Sandoval’s trumpet playing reminds me of being in a pack of baby dolphins communicating for the first time.” Based on James’ reaction to the recording session, I am only left to believe that he is tone deaf and blind.

Finally!! It’s TUESDAY, y’all! The “See You Next Tuesday” party is about to get started. James rolls in with balloons to boot, so you KNOW it’s gonna be wild! Jax shows up to Sur because he cannot simply let Brittany work in peace, plus he couldn’t miss the epic spinning skills of the glow-stick throwing James Kennedy. While the crowd dances, LVP enters and finds a seat right by her favorite employee, Jax.

While that is going on, Scheana confronts Katie about the boyfriend cheating rumor and Katie hits Scheana with the fact that she doesn’t appreciate the things Scheana says either. The girls end it and decide not to talk about other people’s relationships cuz THERE’S A NEW IDEA. Speaking of new ideas, James may be claiming to be sober, but have ya caught a load of those dance moves?! LVP should take a closer look at HIM, and stop prying into Brittany’s love life, although she is the only one who truly tells Brittany how it is. Lisa begins to Dr. Phil her and lets Brittany know that she has a lot of friends and she is better than this situation. #truth

Scheana, the girl who was trying to have people STOP talking about her boyfriend cheating, goes over to Jen, a SUR server. Scheana knows that Jen has the inside scoop about Rob and the smooching scandal. Scheana tries to justify the behavior by talking a mile a minute and really, she just leaves everyone confused and more sure that the rumor is probably true and that he was, indeed, kissing another girl.

But enough about this relationship. I am more concerned about Sandoval and Ariana. Things are strained between them and Ariana realizes that they aren’t being themselves. They got too involved and too wrapped up in other people’s drama, but Ariana still wants Sandoval to empathize with her more. They make up (BORING), but don’t worry, there are still plenty of dysfunctional relationships remaining on the show. You know…like the Brittany and Jax saga.

Brittany calls her mom and tells her mom that she just “loves him so much” and the mom surprisingly remains quiet which totally worries me, that is until we find out her mom has been married FOUR times. After hanging up with her mom, Brittany proceeds to have a discussion with Jax, the cheater. She spills her heart out and makes Jax swear he will change. “Nothing will ever happen again…I promise,” –Jax Taylor. Promises are NOT made to be broken, Jax…