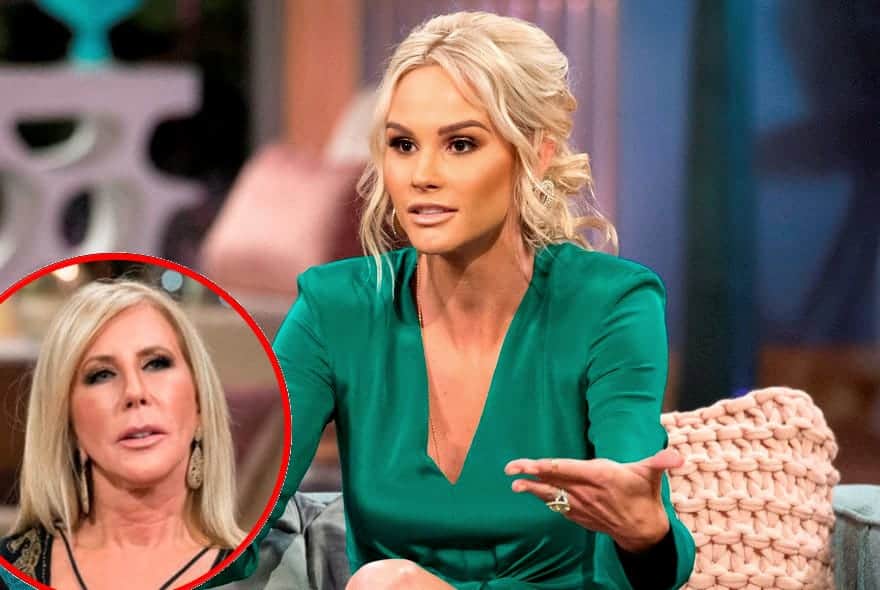 Meghan King Edmonds shocked many Real Housewives of Orange County fans yesterday when she announced she was quitting the show to focus on her family and her pregnancy.

However a new report today is now claiming Meghan didn’t quit, and was actually fired by Bravo! Even more, Vicki Gunvalson is also speaking out following news of Meghan’s departure, and let’s just say Vicki makes it clear she will NOT miss Meghan on the show.

First Radar Online is reporting that Meghan, 33, was actually fired and is saying she quit the show to save face. The reason for her firing you ask? Apparently she was axed for asking for too much money. See Meghan, who is expecting twin boys, reportedly thought she could use her pregnancy as leverage to get a salary increase for next season.

“After revealing that she was pregnant again on the season finale last season, Meghan tried to use the twins as leverage with producers to get an extended contract and pay raise,” a source revealed.

Apparently Bravo refused to take the bait as they felt that Meghan, who is married to former baseball star Jim Edmonds, 47, wasn’t bringing enough to the show to warrant a pay raise.

“She did the same thing with her first pregnancy and it worked. But producers weren’t biting this time around. They felt that she didn’t bring anything to the table and everyone was sick of her manufactured fake drama!” added the source. Ouch!

When announcing her departure yesterday, Meghan made certain to give a shout out to two of her castmates. She wrote, “I must focus on my family and my pregnancy.  I will miss the rush of the first all-cast event of the season, the anticipation of receiving each week’s episode, the thrill of wrapping the reunion.  I have made soul sisters in Shannon Beador and Tamra Judge and that can’t be lost.”

So perhaps this hit a nerve with Vicki who had some choice words for Meghan, and made it very clear she is glad to see her go.

Vicki told Radar yesterday that Meghan’s exit was “fine with me,” adding, “We were never really friends anyways. She was tough to film with.”

“The girl’s a trouble maker,” continued Vicki. “The girl’s a pain in the a**.” That Vicki – always keeping it classy!

Casting for next season should be rather interesting as in addition to Meghan’s exit, it was previously reported that Peggy Sulahian and Lydia McLaughlin had been fired from the show.

TELL US – DO YOU THINK MEGHAN QUIT OR WAS SHE FIRED FROM THE RHOC?