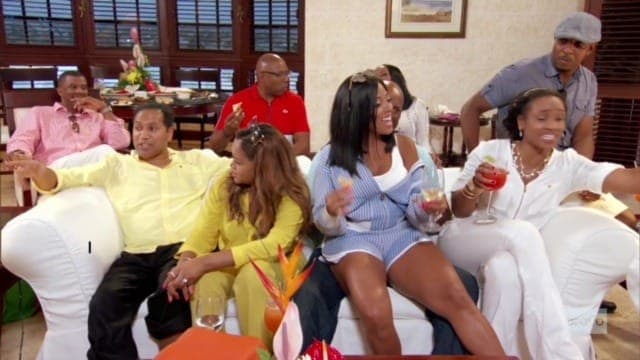 If there was one take away from last night’s episode of Married to Medicine, it’s that Dr. Jackie’s husband, Curtis has lost his ever loving mind!

Here’s the thing about Curtis…you can tell that in his day, he was “the man”. He’s quite tall, has the gait and swagger of the ex athlete that he is, and the awe shucks grin of a man who’s used to his share of female attention. As you’re undoubtedly aware, Curtis was caught having an affair, after pictures of him with another woman surfaced in the tabloids and gossip blogs. Dr. Jackie promptly told him to leave their home, and the couple have been living apart ever since.

But you can tell that he is very confused by his predicament, and can’t for the life of him figure out why on Earth Jackie wouldn’t welcome him back with open arms. The couple have decided to enter marriage counseling with Dr. Ken, who also treated Dr. Simone and Cecil (they actually may want to find someone else), and Curtis explained that he had the affair because he “lost his way”.

Curtis also said that he felt “lonely, unwanted, and unneeded” in his marriage, and when Jackie expressed her regret for the way he’d felt, he said he wouldn’t let her “shoulder the blame alone” (um….WHAT?!). Jackie assured him she would accept no ownership for HIS actions. Jackie is trying, but it’s clear that she’s frustrated. She was looking forward to heading to Barbados for the couple’s trip without Curtis. But when everybody met up at the airport, there was Curtis! And Simone was the one who invited him! (Not cool, Simone!)

Seriously, who does that?! They’re separated, and her “friend” invites him on the trip…without informing her. And he accepts…without informing her. Dr. Jackie was unflappable as usual, and while a bit taken aback, handled the surprise in stride, and resolved  to make the best of it. Am I the only one who would love to see Jackie completely lose it…just for just a second?

Upon arriving at the resort, the couples were greeted by The Mother Sally Dancers, whose booties were….impressive, to say the least. Seriously, some of that HAD to be part of the costume, right?! Like a foam insert, or something? Anyway, Curtis was certainly impressed. He ogled, and cackled, and put himself between them when they came over to dance near Dr. Jackie. The others looked on in amazement, but Dr. Jackie remained unphased. Jackie, no one would blame you if you just halled off and smacked this guy, really.

When they were shown to their rooms, Curtis balked at the fact that his and Dr. Jackie’s room had twin beds, saying that it wasn’t “special”. But Jackie told him it wasn’t something they were going to discuss. As the couples were talking, Simone noticed that Dr. Jackie wasn’t wearing her wedding ring, and said that maybe that meant Curtis needed to buy her a new one. Quad disagreed. Quad said that things were not an acceptable replacement for true support. She went on to inform the others that she and Dr. Greg were in a “tumultuous place” in their marriage, and the two began to bicker. Curtis interrupted them to say that they should work on talking to, instead of “talking at” each other. Really, Curtis?! Marriage advice? With a straight face?! Go sit down somewhere.

Then something very odd happened. When the couples were in the living room, Toya decided to “test” Curtis. This entailed walking over to where he was sitting, and putting her butt in his face. Now we all know that Toya is very proud of her ass. She shows it every chance she gets. But seriously, Toya, what the hell even was that?! So, you must be thinking, surely Curtis wouldn’t…. Oh, but he did! He grabbed either side of Toya’s hips with both hands, and sat her squarely in his lap! Oh, hell no, dude! Toya announced that he failed the test (duh), but oddly, she didn’t move until Heavenly told her to. Again, Jackie barely reacted, saying it was going to take more than that to bother her. Seriously, what DOES it take, Jackie?!

Toya seemed pretty preoccupied with her time on Curtis’ lap because she found way to bring it up again and again throughout the night. While getting ready for dinner, she discussed it with Mariah, who said she thought it was just a joke, but probably not appropriate under the circumstances. When Toya pulled Simone aside at dinner, and asked her if she saw the way Curtis pulled her into his lap, Simone said she didn’t see that. What she saw was Toya sitting in his lap, and that she really needed not to have done that.Quad entered the conversation, and said that yes, she did see Curtis pull Toya onto his lap, and that he just didn’t know what was appropriate anymore because he lacked a “regiment”. I’m not sure that means what Quad thinks it does. But the gist is that Curtis doesn’t know how to act, and on that we agree.

After dinner, the couples played “The Heavenly-wed Game”, which was Heavenly’s take on  the classic game show, The Newlywed Game, wherein couples write down their answers to questions, and reveal them to see if their answers match their spouses. It was a fun game with cute and funny questions meant to keep the mood light. And you won’t believe who won…Jackie and Curtis! They gave identical answers to 100% of the questions, and when this was announced, Curtis hugged Jackie and said that they were going to “put those beds together”. Ugh! Last place went to Quad and Dr. Greg, who may actually be on shakier ground than Dr. Jackie and  Curtis.

Throughout the game, the two glowered at each other from across the table, and made snide comments, when answering their questions. One of the only questions they gave the same answer for was, ‘who said I love you first?’ Both agree that it had been Greg (Aww, that’s sweet, but then Greg ruined the moment by pointing out that he had been drunk at the time (OUCH!)! It was pretty awkward, and everyone decided to retire to their own quarters for the night. But Toya wanted to reminisce one last time about her time on Curtis’ lap. This time with Jackie.

Again, Toya’s narrative called attention to Curtis pulling her onto his lap. Jackie assured her that is was fine because she trusted Toya. Toya said that she wanted Jackie to trust Curtis. This was the only thing that seemed to ruffle Jackie’s feathers, insofar as Jackie’s feathers CAN be ruffled, that is. She once again told Toya that she was fine, and expressed her wishes that the ladies not interject themselves into her relationship woes any further. (Jeez, Jackie…calm down!)

Well, this certainly was a lot for the first day of their trip, but the fun’s just beginning! The couples continue their trip next week, and scenes show Quad unraveling under the stress. Stay tuned!

TELL US – WHAT ARE YOUR THOUGHTS ON THE MARRIED TO MEDICINE RECAP & LATEST EPISODE? WERE CURTIS & TOYA OUT OF LINE FOR THE LAP INCIDENT?