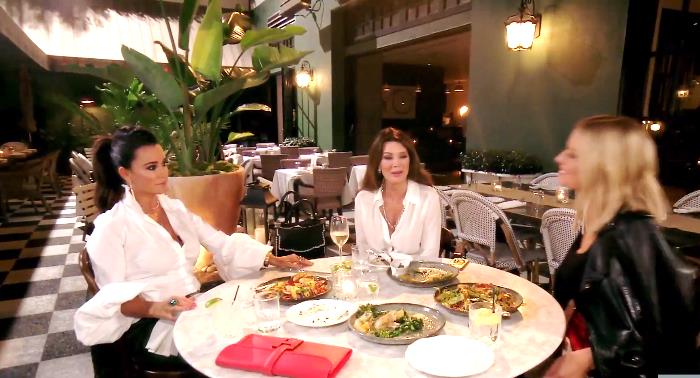 With the Real Housewives of Beverly Hills women, when does an apology really mean “I’m sorry” and when does “let’s put it behind us” really mean an issue gets dropped?? According to never, apparently.

Dorit, the resident snob, and her husband, PK, meet in the “great room” to discuss PK’s birthday party… that Dorit planned with PK’s money. They laugh and chuckle over Dorit’s performance with Boy George. Nothing could have made that concert any less cringe-worthy, not even a crash course in Erika Jayne 101. “George loves to sing with singers who can’t sing.” PK, thanks for slinging out some #realtalk. Dorit shares her trepidation with meeting Kyle, as it feels so “wrong” that Kyle was sticking up for Teddi.

Luckily for PK, he is still deafened by Dorit’s singing voice from the night before and therefore cannot hear the complaints from his wife. “The kids” created a $1,500.00 statue for PK, a 3D replica of Dorit, and their children, Phoenix, and Jagger. Dorit drops this birthday gift and breaks it promptly after PK received the gift. It’s better off. We all know that PK would not be displaying that in his home office.

“A bag full of fresh puppies. What could be better than that?” Ah, LVP. Just one day. One day in your pink shoes. You are even able to get lawsuits dropped. You have some sort of magic, lady. LVP is pumped up and excited to celebrate the big news with her girls, Kyle and Dorit, at dinner later on.
Before Kyle heads to dinner with Dorit and LVP, she meets up with Teddi. “This sh*t between Dorit and I is like water torture.” Couldn’t agree more, Teddi. Teddi STILL cannot get over the fact that Dorit STILL has not apologized. Correct me if I’m wrong, but I thought those two decided to put this issue in the past. Ugh. Kyle and Teddi discuss the upcoming beach house trip that Teddi is hosting. This oughta be classic watching these broads pile into a “small” beach house.

Erika and Rinna are just two “girls” out for dinner and they bond over being mothers. “I don’t know what the f*ck I am doing, but I am good actor” –Lisa Rinna. This lady will forever try to be known as an actress, because there are camera crews filming her and she needs to stay relevant. Must be hard to be so damn busy, like you, Rinna. Maybe just stick to being a momager?

Dorit has made yet another housewife wait for her arrival. LVP explains she is going into “Teddi-mode” and is beyond annoyed that both Kyle AND Dorit show up late. LVP doesn’t let their late-ness bring her down, as she is excited to share that the law suit has been dropped. Cheers! Kyle does a stellar job of changing the entire mood of the dinner. She breezes over LVP’s announcement and asks Dorit directly if she is mad at her for chiming into the Teddi issue from the night before. Kyle explains that she was not “butting in,” but rather trying to “diffuse the situation.” Kyle is completely bent out of shape and begins crying because she feels like Dorit and LVP are attacking her. Not only that, Kyle believes that the two women PLANNED this “operation attack Kyle” in advance. Crazy much?

LVP cannot take the drama and has had enough. “Kyle is crying over nonsense” and she would much rather have the conversation be about her lawsuit getting dropped. LVP storms out of the restaurant because, according to Kyle, she “is not the focus” and she needs a lot of attention. Dorit shares with Kyle that LVP behaves this way since she did not come from a very loving family growing up. Kyle is SHOCKED that Dorit knows more about LVP’s past than SHE does, and is even more hurt that she doesn’t even know that LVP has a jewelry line! Whaaaaaaat. Someone not sharing with Kyle?! Insane. The “I’ve been friends with her longer” fighting ensues and I can’t wait to see where this story line goes.

Rinna and her lips are hanging with her kiddos, aka, “the baby hustlers.” I can’t. Rinna is nonchalantly pushing around all of her scripts because the cameras are out and she is doing everything she can to prove to society that she is, OF COURSE, still acting and hey! Look at all these shows I am gonna be on! She prods her daughter, Delilah, about her big NY move and something tells me this is the first time they are actually discussing this together. But, alas, they can’t hang for long, since Delilah needs to get her “non-surgical facelift.” Wonder where she got ideas like that from?!
A new day… same drama.

Over in Dana Point, California, Teddi preps for the arrival of the ladies at her beach house. It’s gonna be a laid back 24 hours with some pot luck meals and twin beds. This is gonna go over swimmingly. The only one missing out on all the fun is Rinna, cuz ya know, she is WORKING. According to her, getting back to the “Days of our Lives” set is like “coming home.” Rinna is feeling the pressure and is stressing….just like Kyle waiting for Dorit to make it to her house…Dorit is late. AGAIN.

LVP and Erika share a ride to the beach and LVP opens up to Erika about the night before when she stormed out. LVP explains that she really does love Kyle and the fact that Kyle suggested this was a pre-meditated attack is just absurd. This extra long car ride is just the fuel needed to add to the fire. Let’s drive to a far away beach house and get all amped up the entire ride there. Good idea. Rinna cannot be left out for long and it HAS been about an hour since the last time she told people she is filming for “Days,” so she Face Times with Erika and LVP. Erika fills Rinna in on allllllll the drama as quick as she can before Rinna has to head to her call time and ends the convo. SHE IS WORKING, PEOPLE. (Sidenote: Didn’t SHE call ERIKA?!)

Erika and LVP are the first to arrive to Teddi’s house. They are, of course, waiting for DORIT and Kyle to reach the destination. Surprise, surprise. WHAT IS DORIT WEARING. So much for being appropriately dressed at the “casual beach house.” I could continue to knock her, but she DID bring an “olive forest” and her mom provided tons of food for the gals. LVP jumps right into the “to be continued” fight from the other night. It appears as though LVP does have feelings. Kyle goes for it and asks LVP, “If Dorit was sitting there crying, would you have gotten up and left?” LVP responds with “I don’t know…” and Kyle is distraught and feeling needy. LVP states she no longer wants to talk about this conversation (…yet SHE brought it up…?) and now everyone is weird and awkward and chugging tea and cocktails like it’s going out of style.

Later, Camille joins the girls at Teddi’s beach house and they all head down to watch the sunset. Camille obviously needs to be filled in on the events that occurred, and there ya go, it happens again. The pettiness explodes and this “whole thing boils down to three b*tches who are competitive for friendship.” Erika Jayne, you are the best. The rose flows like water and somehow, LVP pulls an apology out to Kyle. Thank heavens because Kyle and LVP are my favorite friendship and I would hate to see a chick with a fake accent and bad hair get in the way

TELL US – WHAT ARE YOUR THOUGHTS ON THE RHOBH RECAP & LATEST EPISODE?