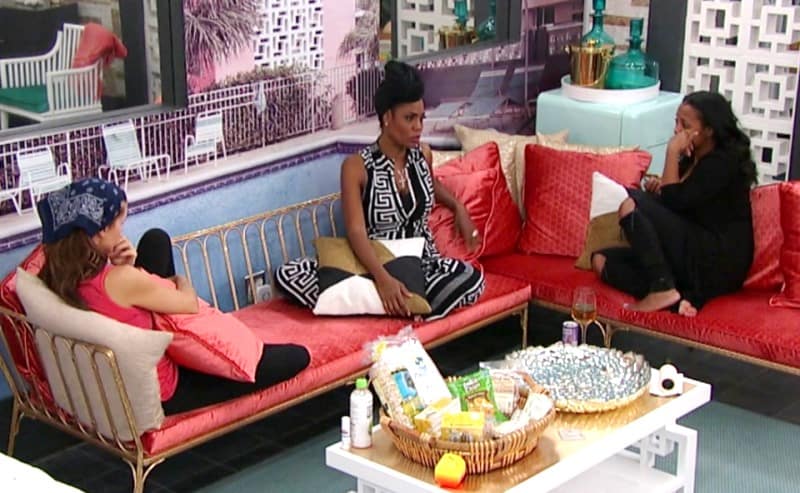 Lesson one: hoes before bros…always. If you ever find yourself in a fight for survival, no one will have your back like your girl squad.

Lesson two: should you ever become the leader of the free world, and decide to hire a former reality show villain to join your staff, and then fire them, you should ABSOLUTELY make them agree not to appear on reality television for at least a decade. Also, give them a hefty severance package. Otherwise, they’ll write a book!

See?! Educational. But more on that later. There’s a game to be played here.

When we picked up with the housemates, they were still in a lather over the new “gift bag twist”. One of the 11 bags holds the power to “recast” the Head of Household (HOH).

This power may only be used once, and allows the holder to become HOH, and nominate their own choices for eviction. No one was quite sure how or when this power should be used, so they concentrated on buttering up the current HOH, Shannon Elizabeth.

The women didn’t have much to worry about. They’d already decided to back each other’s play. But nothing can be left to chance.

Omarosa knows this. So she moved in for the kill. How do you forge a friendship? Inspire trust? You spill your guts, that’s how. And if you’re Omarosa, you drop a name…THAT name. The one that, love it or hate it, never fails to provoke a passionate response whenever it’s uttered..Trump.

Oh, but Omarosa was subtle. She didn’t just fling that name out there willy nilly. She started by talking about how fiercely loyal she is, “sometimes to a fault”, and that she’d learned from “recent experiences” that misplaced loyalties can result in “getting your head bashed in”.

Shannon was hooked. And who can blame her? Real life government intrigue? A backstage pass to the Oval Office? Yes, please!

When Keisha came in, Shannon giddily invited her to join them, and hear all the scoop. But Keisha wanted to make her position clear first. She expressed her disdain for Omarosa’s former boss, and said she didn’t understand how she could support him.

Omarosa said that it was no different than Keisha’s support of her own former boss, Bill Cosby. Impressive! Deflection level: expert. Maybe she belongs in DC, after all.

But Keisha wasn’t having it. She quickly reminded Omarosa that Bill Cosby was NOT the leader of the country. Ok, then..round 1 goes to Rudy!

In an effort to maximize their advantage, the ladies recruited Ross to be their spy, and report what the men were up to. But Ross doesn’t work for free. He wanted some scoop, too!

And boy, did Omarosa deliver! Through tears, she said that “seeing the pain and fear in people’s eyes when they talk about Trump” was hurtful to her, but that she “had to live with” her choices.

Omarosa went on to say that she’d been “haunted by tweets” every day, never knowing what he’d say next. She even said she’d tried to stop him, but that “they” kept her away from him. What a time to be alive! You can’t make this stuff up.

And then it went from bizarre to dark. Omarosa said she “tried to forget” all she knows, but “it’s bad”, and “it’s not going to be okay”. Sheesh!

After all this, it was finally time for the nomination ceremony. The castmates had gone round and round about the gift bags, and were anxious about who Shannon would nominate for eviction.

The men had correctly guessed that Shannon would nominate two men, and they were forced to acknowledge that they were powerless. A bold move was needed, so Chuck  stepped up.

He decided to open his gift bag. But the ladies couldn’t risk one of the men taking power, so each of them requested to open their gift bags, too. Except for Marissa. She only pretended to make the request. What type of  Big Brother sorcery was THAT?!

Because more than one housemate requested to open their bags, the rules dictated that there must be a drawing to decide whose bag would be opened.

Keisha won the drawing, and she opened her gift bag to find the “recast” card, which she promptly used to usurp Shannon’s title, and announce her own nominations: James and Chuck.

Keisha assured them that her decision wasn’t personal, but neither of them wanted to hear it. As far as they were concerned, this meant war!

Metta World Peace was angry too. He actually WANTED to go home. He missed his wife. Awww! How…weird. Did no one explain to him how the show worked?

Whew! And we’re only on part two of the premiere! Stay tuned…tonight we find out which housemates will be the first to go on the two hour elimination show.