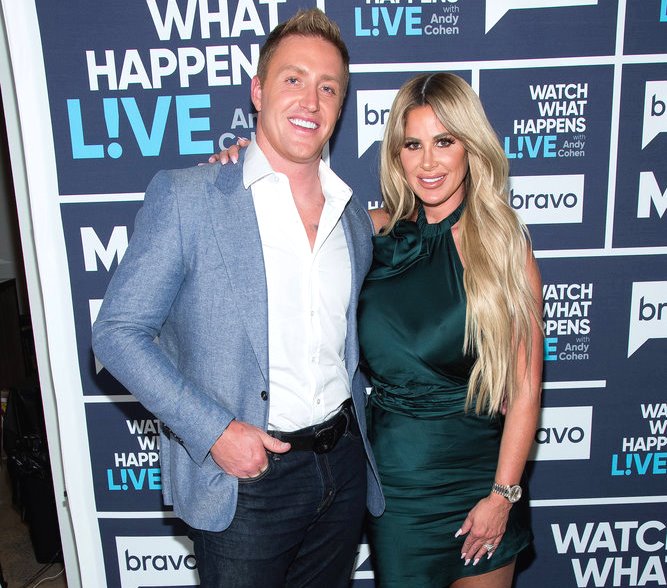 Days after slamming Nene Leakes for being “disgusting,” Kim Zolciak is  now accusing her Real Housewives of Atlanta costars of being jealous of her marriage to husband Kroy Biermann!

Yes, she went there. This comes on the heels of the latest RHOA episode during which Kim was slammed by her castmates, mainly Nene, for trying to bring Kroy along on a girls trip to Spain.

Ultimately, Kim ended up being dis-invited from the trip after she refused to leave Kroy at home. In her latest Bravo blog, Kim defends her decision to bring Kroy everywhere she goes. Sometimes Kroy even waits outside in the couple’s car while Kim socializes inside with her costars.

“Some of these same girls complain that Kroy drops me off or picks me up from events. It’s bizarre,” said Kim. “You would think that they would support my healthy, happy marriage, but then again they don’t have that, so why would they? It’s evident that they are envious of mine.”

Kim also slams Nene, claiming she was mocking her health issues. Nene was seen stating that Kim uses her health issues as an excuse to avoid doing things she does not want to do including going on RHOA trips.

“I had a stroke, which NeNe clearly likes to mock and make fun of,” says Kim. “My stroke occurred within an hour of landing from Los Angeles to Atlanta, so I naturally have a fear inside of me of taking a 10+ hour flight. Being in another country and only being able to count on Shereé is a lot. Thinking about that brought the risks to the forefront of my mind, and those risks weren’t worth the reward.”

She does on to insist she does not use her kids or health issues as an excuse. “The ladies were saying that I always have an “excuse” to not go on trips, but it’s not an excuse when it’s my reality!” claimed Kim. “You call them excuses, I call them facts!”

She continued, “When everyone went to Africa, KJ was 3 weeks old, and Kroy was in football camp. Around the Anguilla trip the following year, I was 34 weeks pregnant with Kash and was not willing to travel to an island that you can only get to via boat or helicopter! Bye, girl, bye! My kids are the most important thing to me; I prioritize my life, my marriage, my kids, and my health — all of which come before these fake ladies.”

TELL US – DO YOU THINK THE RHOA LADIES ARE JEALOUS OF KIM’S MARRIAGE TO KROY?