The Real Housewives of Beverly Hills Recap: Kyle Accuses Lisa Of Being “So F**king Unloyal” 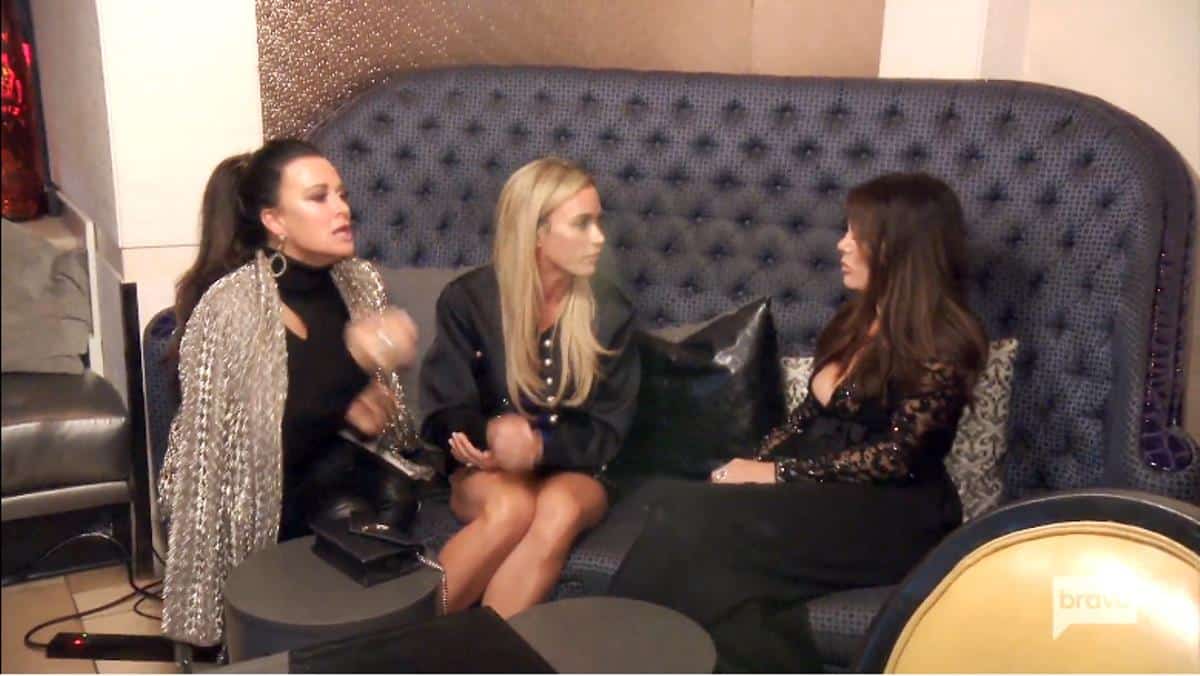 I would say there’s gotta be something in the New York City air to make these Real Housewives of Beverly Hills act like a bunch of lunatics, but then…I realize….nah. That’s just them.

After word vomiting the night before, Dorit has the nerve to hang out with Lisa, even though she bashed her like crazy to Teddi, Camille, Erika, and Rinna. Dorit is amped about being on the cover of Bella Magazine. She apparently “embodies what Bella Magazine represents,” which explains why I have never heard of Bella Magazine andddd why I’ve never read it. We viewers get treated to the most awkward walk in the park with Dorit and LVP, since Dorit decides it would be best to just rip the band aid off and fill LVP in on the convo from the night before. I am quite surprised someone is finally owning their wrong-doings, but alas, that would be too good to be true!

Dorit stutters and fumbles and does her best to include Kyle in the drama as she spins a tale of twisted truths to LVP. “Kyle and I”… “we were…” There’s no “we,” Dorit. You were the one who just HAD to tell the ladies about the debacle. Dorit explains to LVP that she was trying to figure out “what on Earth warranted that kind of departure?” (Ya know, the one where LVP left Kyle and Dorit at dinner because she was exhausted with all the petty crap). Ah yes…but Dorit doesn’t quite get to the point because she is totally intimated by LVP (rightly so), and she knows she messed up. Dorit likes to do this little dance where she says dumb things and then tries to drag others into her web of BS. She only half tells LVP what she actually said and somehow, LVP brushes it all off. “Go make yourself beautiful! I love you!” Wait. What?! How does Dorit get out of this mess?!

On this trip, everyone’s gotta feel like a true Bravolebrity. Erika, not to be outdone by the other ladies, meets with her publishers to discuss her BOOK. She meets up with a group of legit people who fake that they are actually interested in her life. Erika leaves her shades on cuz she wants to do her best Stevie Wonder (bet you her creative director, Mikey, told her to leaves the sunnies on “for the look”). Erika explains that she is “beating the odds” and that no one ever expected her to come this far. Right.

Later, watching these ladies get ready for the evening is incredible. Dorit gets pampered by her hair and make-up artists because she is, after all, a cover model for a magazine, NY Fashion week’s edition. She claims she is the “guest of honor” and that she needs to “ooze fashion.” The only thing she needs to ooze is truth…starting with her fake accent. #realtalk. Meanwhile, Rinna rambles on and on to her glam squad about her daughters. She states that she did not “sign up to be a momager, but they need guidance.” Say it with me: Kris Kardashian wanna-be! Even Teddi, the self-proclaimed non-girly girl, is getting dolled up. Speaking of dolled up… Erika dons a “Baby doll Gucc and brand new pearl white go-to hooker pumps to complete the “baby doll” hooker look.” I love it. That ensemble just screams CLASS.

Over at Kyle’s room, LVP pops by. As Kyle’s pony tail gets tighter and higher, LVP lets Kyle know that she spoke to Dorit about the things she “said” the night before. Kyle lets her know that Dorit was sharing things that she believes LVP told Dorit in confidence. This is a very clear example of jealous friends vying for LVP’s attention. Suddenly, the things Dorit said which seemed “not so bad” according to LVP, become larger issues. LVP is livid that Dorit thinks she is insecure. LVP is a lot of things…but insecure is not an adjective that comes to mind.

I can smell the hairspray and perfume once all the women pack into the taxi van to head to the Bella Magazine event. They give Dorit their personal “words of wisdom”- some very deep things were thrown out like…”have fun” Dorit’s smug and can hardly contain her excitement as she sashays up to the step and repeat. “The press is ready for you.” I hope they don’t give her the mic for too long. We all know she likes to ramble. Nevermind. Give her the microphone. Maybe she will say something so dumb that we will never have to hear from Dorit Kemsley again. Fingers crossed!

Whilst Dorit is getting whisked away, Kyle takes the opportunity to talk to Erika about Teddi’s beach house. She wants to let her know that a. she wasn’t the only one talking smack about Erika and that b. she truly apologizes because she loves her. PRAISE BE–it appears as though hotel-gate got squashed. LVP, meanwhile, digs her claws into Teddi. She knows that Teddi is new to this group and will spill the truth beans about what Dorit actually said. LVP is dead set on getting to the bottom of this mystery.

Dorit’s party lasts 13 minutes; therefore the tipsy gang heads out for some drinks because they can’t have the evening end yet! They toast Bella Magazine and the girls are well on their way to getting drunk. Kyle, aka Debbie Downer, has to kill the mood and confront Dorit right then and there. She claims that Dorit made the Erika situation way bigger than it had to be. But wait. Didn’t Kyle and Erika already fix hotel-gate? Why can’t we all just get along?

Kyle’s not done yet…oh no. She is LAYING into Dorit on her big night, yet LVP remains mute. No surprise there. The only thing I really want is to have Rinna talk. She looks bombed and it would be hilar to have her step in as comic relief. Relief is what is needed. These girls have beat these topics to death. LVP claims she is “just very confused” because apparently “a lot of negative sh*t was said about me.” Dorit feels threatened and realizes she cannot make it out of this web of lies alive, so she does her best to deflect her anger onto Teddi. Drunk Rinna is amazing and cannot keep up with all of the back and forth. “What’s the issue? Why are we going around and around?” OMG. I think this is the first time I can ever actually relate to Rinna. “These b*tches will not shut up. This will go on for hours.” Amen, Rinna.

Kyle claims that she feels “depressed” now and I think the main issue is that she is upset that LVP doesn’t have her back. Kyle is desperately seeking LVP’s approval. It’s almost as if Dorit and Kyle are LVP’s kids and Kyle is asking mom who her favorite child is. She cannot even fathom how LVP could possibly hop in a cab with the “enemy” after all the crap Dorit has talked about her.

Kyle tries to leaves solo, but Erika steps in. Erika is the MVP in this LVP saga, as she coaches the loonies to basically STFU, which is easier said than done. Dorit needs to know: “Why are you trying to divide Lisa and I?” Dorit continues to play dumb (although I am not sure how much is “playing” dumb) and LVP (aka mom) needs to coddle Kyle.

Back at the hotel, Teddi and Kyle sit and powwow. Teddi is backing Kyle up more than LVP and so is Erika. What a strange twist of friendship! “For some reason, Lisa refuses to admit that what Dorit did was really wrong.” Teddi boldly tells LVP how it is and momma Vanderpump does her best to let her needy friend Kyle know that she is important, but that she is going to bed. #goodnight. Mic. Drop.

TELL US – WHAT ARE YOUR THOUGHTS ON THE RHOBH RECAP & LATEST EPISODE? DID KYLE OVERREACT? OR DID SHE HAVE A RIGHT TO BE UPSET?