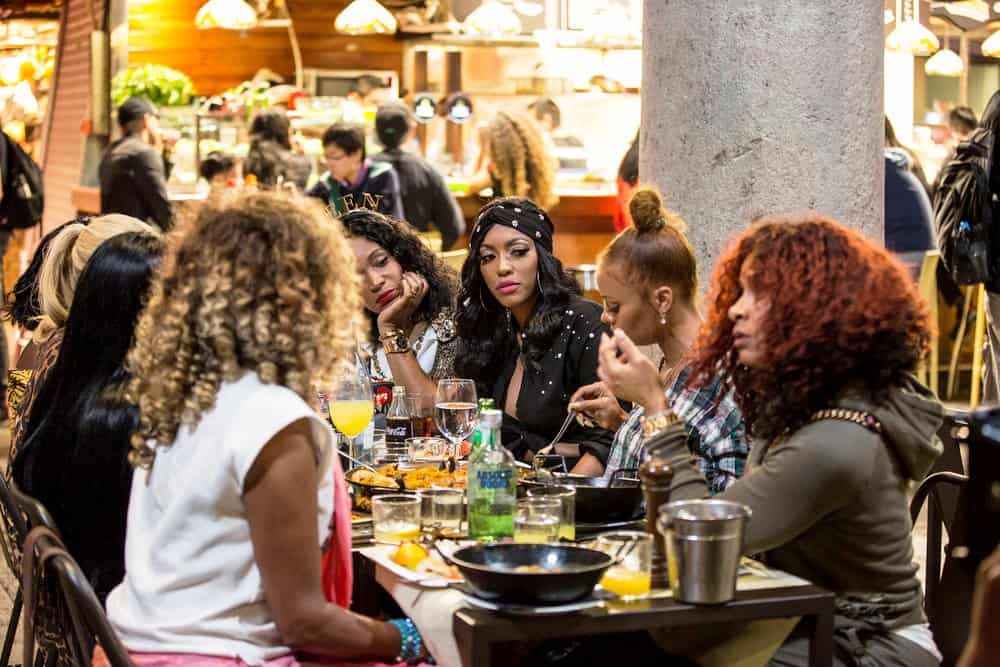 Our favorite peaches were only on the second day of their trip to Barcelona in last night’s episode of The Real Housewives of Atlanta, and they could probably already use a vacation from their vacation!

The ladies couldn’t even get through breakfast before they started throwing shade. Now, ordinarily, these ladies are plenty shady all on their own, but this time they brought along  friends.

Eva Marcille is new to the group, so you can imagine her surprise when she found herself being grilled about her sexuality by, of all people, Shamea, another side friend of the group, on the very first day.

When the ladies asked Eva how she was enjoying traveling with them, she mentioned how uncomfortable the exchange had made her. Shamea jumped right in to justify her intrusive questions, saying that she’d only been asking about something that was “already out there”, and after all, hadn’t Eva come on the trip to get to know everyone?

Eva said that the questions had made her uncomfortable, especially since her boyfriend, Michael Sterling, was currently running for mayor of Atlanta, and certainly wouldn’t appreciate a scandal.

At this, Marlo Hampton, yet another peripheral friend, piped up to advise Eva that it was best to just admit to the things she’s done because everything always came out eventually, and she’d find herself “back pedaling”….like Porsha.

This is what Marlo does. She starts drama and fights among the women because she is positively parched! She’s been trying for several years to get a peach of her own to hold, and she doesn’t seem to care whose face she has to get in to get it.

And Porsha is getting REALLY tired of everyone constantly bringing up last year’s beef between her and Kandi, but other than a little eye rolling, she let Marlo’s comment slide.

After breakfast, the ladies decided that perhaps they should set the bickering aside, and actually see a little of this beautiful city they were visiting. As they set off on the bus, Marlo suggested that as part of the “bucket list challenge” she’d proposed, Cynthia should kiss one of the other ladies, and suggested that the kissee should be Porsha.

Marlo was clearly gunning for Porsha for some reason, but Porsha was taking it in stride, or perhaps she didn’t realize it (she’s never been the sharpest tool in the shed). So he sat down next to Cynthia, and the two ladies kissed for all of 10 seconds, before dissolving into giggles.

The ladies continued on their tour, riding go carts and mixing it up with the locals, when Porsha failed to brake, and crashed hers. She claimed the brakes were faulty, but mainly she just didn’t know how they worked.

But no one was hurt, and that’s all that matters, so the ladies moved on, and went to grab some lunch…with side of alcohol. The cognac and vodka were flowing freely, and once again Marlo started in on Porsha, asking loudly when she was going to talk things out with Kandi.

Now, Porsha and Kandi know good and well that Marlo does not care about their friendship, or lack there of, and they wisely side stepped her question. But damn it, Marlo needed a pot to stir, so she moved on to the video Kim sent to the ladies the night before.

In the video, Kim’s daughter, Brielle, was in NeNe’s bathroom, and roaches could be seen crawling on the floor. Of course, NeNe had been incensed by the video, so Marlo knew it would begin an argument between NeNe and Porsha and Sheree, who both knew what Kim was up to, but hadn’t bothered to warn NeNe ahead of time.

Sheree and Porsha explained that they hadn’t known exactly what Kim was planning, and simply hadn’t wanted to get involved. But Sheree was lying through her teeth. She may not have known that Kim was going to send the video to all of the ladies, but Kim had already shown it to her weeks before.

NeNe, for once trying to keep the peace, quickly let it go, but advised Sheree and Porsha to get Kim in check.

Porsha, sitting right next to Marlo, finally seemed to realize what she was up to, and asked her to stay out of it. But it wasn’t to be. Marlo unleashed on Porsha, and began reading her on everything  from her fake vegan diet to the doormat on her front porch. I know…a doormat? But nothing is too petty for Marlo, and apparently  that doormat was just “too small”.

The other ladies found this absolutely  hilarious, and in an effort to keep things light, they all got into the act, and began teasing Porsha about her tiny doormat…until she began to cry. Really?! Over a DOORMAT?!

Yes, really. Porsha said she was hurt because her mother had given her the doormat as a housewarming gift. The other ladies quickly apologized, and said they were only joking, and hadn’t actually even noticed the doormat.

But Porsha’s alligator tears meant nothing to Marlo. She was on a roll now, and nothing was going to stop her, even NeNe, who desperately tried to calm her down, and stop the dramatic scene from unfolding in the otherwise quiet restaurant.

Porsha was channeling her inner Kenya, and had been vamping with a red fan all day, and was now using it to gesture toward Marlo, pointing it dangerously close to her face, as they continued to argue viciously.

Marlo apparently  took this as a threat, so SHE channeled her inner Porsha, and attempted to rip the fan from her hands. Oh boy! The ladies had seen this scenario play out before, and before things escalated further, and they all got “locked up abroad” they got up, and ushered Porsha and Marlo out of the restaurant.

Porsha and Marlo, now separated into two groups, continued to complain loudly about each other, with Porsha saying that she knew plenty about Marlo, and her “low life” ways that she was kindly keeping to herself…for now.

After the ladies turned in for the evening, Porsha went to NeNe’s room, and announced that she was leaving Barcelona, and heading back to Atlanta early. Really, can you blame her? Personally, I don’t know why these ladies continue to travel together anyway. It never goes smoothly.

But this was a particularly wise choice on Porsha’s part. She has “anger management” issues, and had the wherewithal to leave before she and Marlo ended up rolling around on the floor, trying to rip each other’s weaves out…a position Porsha has found herself in more than once.

Well, I know I’m exhausted, how about you?! The ladies are taking next week off, but stay tuned, the Barcelona “fun” continues March 11th!

TELL US – THOUGHTS ON THE RHOA RECAP AND THE BARCELONA TRIP? TEAM PORSHA OR TEAM MARLO?