Married To Medicine Recap: In The Black 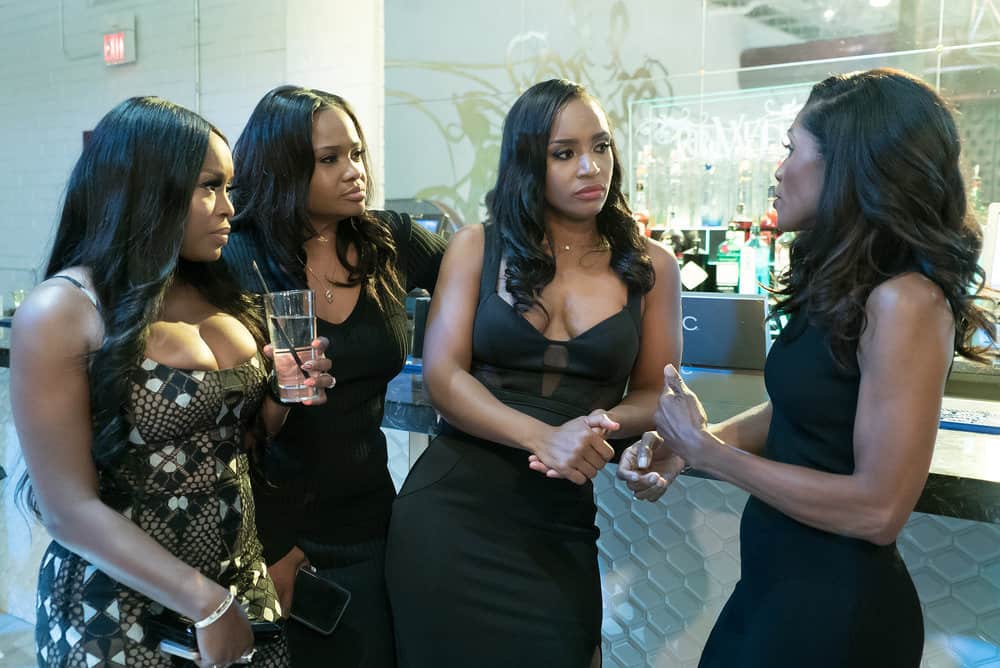 This season of Married to Medicine has been quite the emotional rollercoaster, so it was only fitting that it ended with a party for one couple, and possible parting of the ways for another.

Let’s start with the good news: Dr. Eugene surprised Toya with the news that he was making the final payment on their $170k tax bill!

As you can imagine, this was no easy feat. And Toya was so elated, that she promptly suggested they throw a party. Because, really, what better way to celebrate crawling out from under crushing debt than to blow a few grand on a party?!

But Eugene agreed that a celebration was in order, or maybe it was just easier to pick up more extra shifts at the hospital than to argue with his wife. And besides, being “back in the black” didn’t mean he was out of the doghouse, and he had some making up to do.

As you may recall, Eugene became frustrated with the ladies’ bickering during Heavenly’s DNA reveal party, and said they were “acting like a bunch of n*****s!” Needless to say, it didn’t go over well with the ladies.

Heavenly was particularly upset. In fact, she’d actually walked out of her own event early because of what Eugene had said, and even though a week had gone by, she didn’t even speak to Eugene when she arrived at the party. But Eugene is a pretty sweet guy most of the time, and he and Heavenly go way back, so after a heartfelt apology, all was quickly forgiven.

Contessa, on the other hand, wasn’t so ready to let it go. She actually had quite a few snarky comments about the party, telling Simone it was the “dumbest s***” she’d ever been to.

Simone had to agree. After all, who celebrates paying their bills? But she sensed trouble was ahead when she inquired about the “gift” Contessa had brought, and found out it was a book on the history of the N word.

Contessa apparently wanted to educate Eugene, but Simone didn’t feel the party was the proper place to do it, and wisely warned Toya about what Contessa had planned.

Toya told Contessa that she “better NOT” give Eugene that book at their party, and assured Contessa that Eugene was well aware of the history of the word, and wouldn’t use it again in her presence. Contessa didn’t seem completely satisfied, but eventually the matter was dropped after Toya apologized.

With all the awkwardness out of the way, the party was finally in full swing. Everyone was laughing and dancing and enjoying themselves. Even Jackie and Curtis could be seen kissing and cuddling like teenagers!

And then..Quad and Dr. Greg showed up. They were really late, and while Quad regretted their tardiness, she felt it was understandable considering that she had to do EVERYTHING around the house, and EVERYTHING to try to save her marriage. This woman just loves playing the martyr.

Now everyone knows that Quad and Dr. G are in a bad place, but surely they could put their differences aside for the evening and just celebrate with their friends, right? Hahaha, no, of course not! Because then the evening wouldn’t be about them. They both walked in with long faces, and went to opposite sides of the room, where they proceeded to regale their friends with the details of their many problems…again.

Jackie advised Quad to “put in the work” needed to repair her marriage, and warned her that ending it was no small thing. Contessa and Simone gave similar advice Greg. These two are exhausting! It’s a party, for crying out loud!

Quad couldn’t even put on a brave face while the ladies were reflecting on the year behind them, and toasting their friendships. She just sat silently pouting, and bringing everyone else down. Jeez, just stay home next time, Quad.

The following morning, Quad decided to sit Dr. G down for a much needed talk. But, as usual she wasn’t very specific about what she needed from him, instead just saying that she felt they were on the “same old merry go round”.

Quad said that she had goals and aspirations of her own, but that Greg was only concerned with his own career, and felt that Quad’s only job should be to support him.  Greg said that his needs have yet to be met. This, of course, meant babies, which Quad refuses to even discuss until conditions improve in their marriage.

Then Greg began talking about how hard he works, and asked if Quad had any idea what it was like to work such long, hard hours, only to come home to constant drama. OK, I’m beginning to understand what she meant by “merry go round”. They have the same argument using the same words constantly. So maybe it’s time get off the ride?

Quad certainly seems headed in that direction. During their couples interview, Quad finally just flat out asked Greg if he wanted a divorce!

Greg said he “didn’t want to do this on television”, and got up to storm off the set, a first for a cast member of Married to Medicine.

Back at home, Quad stormed away, as well, saying she was “done” with Greg’s “passive-aggressive bulls***”, and directing the camera crew to “pack it up”!

Whew! So, that’s a wrap on what was surely the most dramatic season of Married to Medicine to date. But don’t go too far, the three part reunion starts next week, and it looks like we haven’t seen anything yet! Stay tuned!