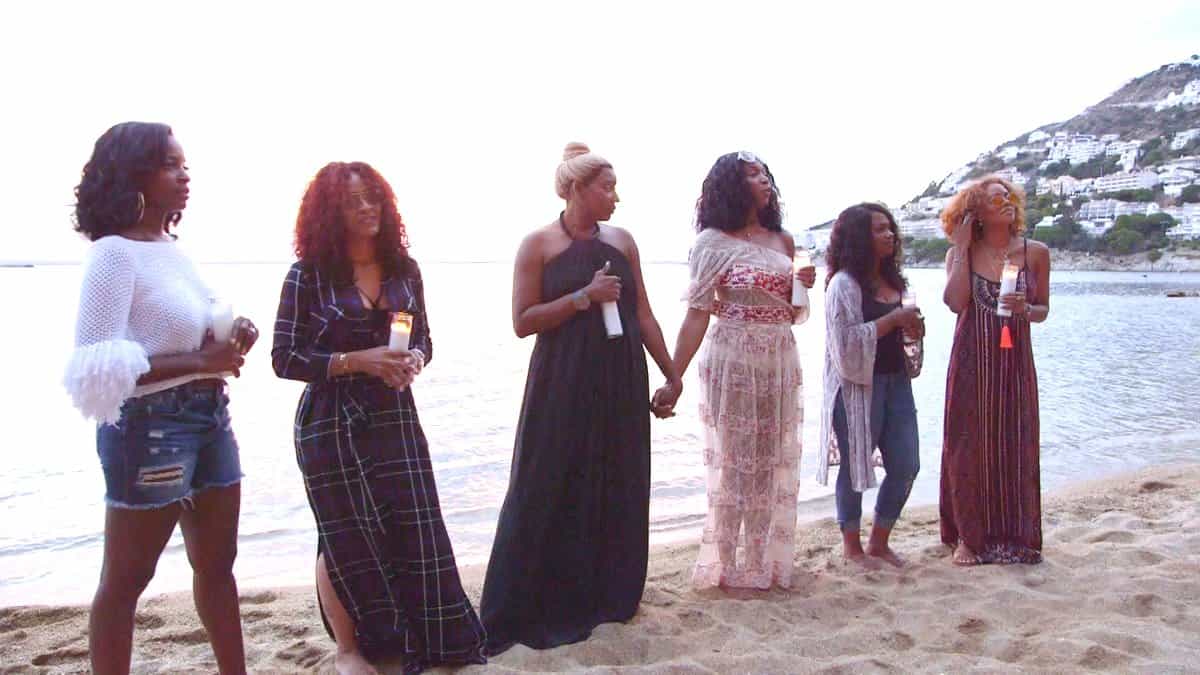 After the first two drama-filled days in Barcelona culminated with Porsha fleeing for home after her standoff with Marlo, the rest of the Real Housewives of Atlanta ladies finally settled in and began acting like adults who actually like each other…mostly.

While Sheree was taking a call from her new prison bae, Tyrone, Kandi asked NeNe if she was planning on speaking to Sheree about her reservations about him, and NeNe’s reaction was just strange.

NeNe immediately became ultra defensive, and said that she’s been married for 20 years, loves only her husband, and has NEVER dated Tyrone. Wait….what?

Kandi didn’t say anything about NeNe dating Tyrone. We can only assume she was referring to NeNe’s past statement about knowing Tyrone before Sheree did, and her claim that he was a “con artist”.

But NeNe’s vehement reaction clearly had all of the women thinking NeNe was protesting way too much. I mean, when you start making denials about things you haven’t even been accused of yet, people get kind of suspicious.

Her denials were all the more dubious, considering that during a previous conversation with Sheree, Tyrone claimed that NeNe had tried to hit on him back when they first met. And, of course, NeNe and Greg were separated for some time. There’s clearly WAY more to this story!

After Sheree finished her call, Kandi suggested they do a photo shoot so that Sheree could send her man some sexy pics. Sheree made every excuse not to participate…she was tired, she was on her period, it was the end of a long night, and she looked a “hot mess”.

But the other ladies persisted, and Marlo agreed to “style” Sheree for the photos, so she relented. Let’s just say Marlo didn’t do her girl any favors.

Sheree emerged from Marlo’s closet in a long black Elvira wig, leopard leggings and matching stilettos, and was given a gold princess phone as a prop.  She looked like Satan’s secretary. But hey, Tyrone’s been in prison for a while, so he (and the rest of the inmates) will probably be thrilled.

The rest of the evening went off without a hitch, and while Sheree probably would have looked better in the sweats and lower key wig she’d been wearing before, the photo shoot was light hearted, and led to an all night drinking and twerking fest.

The following morning, Shamea was still thinking about NeNe’s strange reaction to Kandi’s question about Tyrone, (or more likely, she just wanted to stir the pot) and mentioned it to Sheree.

Sheree was mostly just amused, and oddly enough, didn’t even mention what Tyrone had said about NeNe, but said that some sort of past business between NeNe and Tyrone had caused the epic “Trump checks” argument they’d had a few seasons back that led to the women not speaking to each other for 4 years.

Later in the evening, with Sheree, Kandi, and Shamea off shopping, Eva asked NeNe why she had gotten so defensive about Tyrone, and she got defensive all over again.

NeNe said she was frustrated because the question “kept coming up” (it hasn’t), and that it was “disrespectful” because she’s “Mrs. Greg Leakes” (ok, that much is true) and she “doesn’t know Tyrone” (she obviously does), and that any questions about him should be directed to Sheree.

Poor Eva! She’s just getting to know these ladies, and certainly must be a little taken aback by their tendency to have extreme reactions to non issues, so she wisely sat back, and didn’t ask any more questions.

Over breakfast the next morning, and also likely looking to stir the pot, Marlo mentioned to NeNe and Cynthia that Sheree had been awfully quiet during the trip, and wondered why she seemed to have no onion about the video Kim’s daughter, Brielle, had taken of bugs in NeNe’s bathroom.

NeNe said that Sheree was always quiet, and  that she wasn’t surprised that  Sheree hadn’t talked about the video, considering that she’d known about its existence long before Kim had shared it with the rest of the group, and had failed to warn NeNe about it.

Marlo seemed shocked by this revelation, but NeNe explained that this type of behavior was par for the course when dealing with Sheree because she “only rides for herself”.

Surprisingly, the issue of Sheree was quickly forgotten, and aside from the shade they constantly threw behind each other’s backs, the two actually got along pretty well when they were face to face.

In the interest of continuing the good will, no matter how fake, Cynthia announced that their last day in Barcelona would be one of “love and light”, and that she would be getting “baptized” in the ocean.

The ladies were a bit skeptical at first, but agreed that they could all use some positivity, so off they went to the beach.

The “ceremony” began with each of the ladies getting a candle with a cast mate’s name on it, and being asked to say something positive about that person. Sounds easy enough…unless you’re a member of this group.

The only hiccup came when it was Eva’s turn to say something about Shamea. She struggled to find anything positive to say, and at first it looked like the day of love and light was about  to take a dark and hateful turn.

Eva began by saying  that they’d “gotten off on the wrong foot” and that she hadn’t appreciated the shady way  Shamea had brought up internet rumors about her dating rapper, Missy Elliot,  and called it “whack, tired, and childish”.  Ouch! But also true.

But Eva closed by saying that she hoped they could be friends, and that if she’d done anything to contribute to the tension between them, she apologized.

I know what you’re thinking: confronting a problem head-on, in a mature and gracious way, without yelling, or physical altercations, or years of  passive aggressive backstabbing?! Is that type of thing even allowed?!

Apparently it is. Because Shamea received what Eva said, and apologized. It even seemed genuine! There must be something very special in Spanish water.

If so, Cynthia will certainly get the benefits, because she then “baptized” herself in it, and although, as Kandi aptly (and hilariously) observed, “it was more like a “ho bath”, it really was a lovely way to end the trip.

Well, look out, Atlanta! The ladies are heading home to handle some unfinished business. And from the looks of things, that Spanish water has already worn off. Stay tuned!

TELL US – THOUGHTS ON THE RHOA RECAP AND THE LATEST EPISODE?