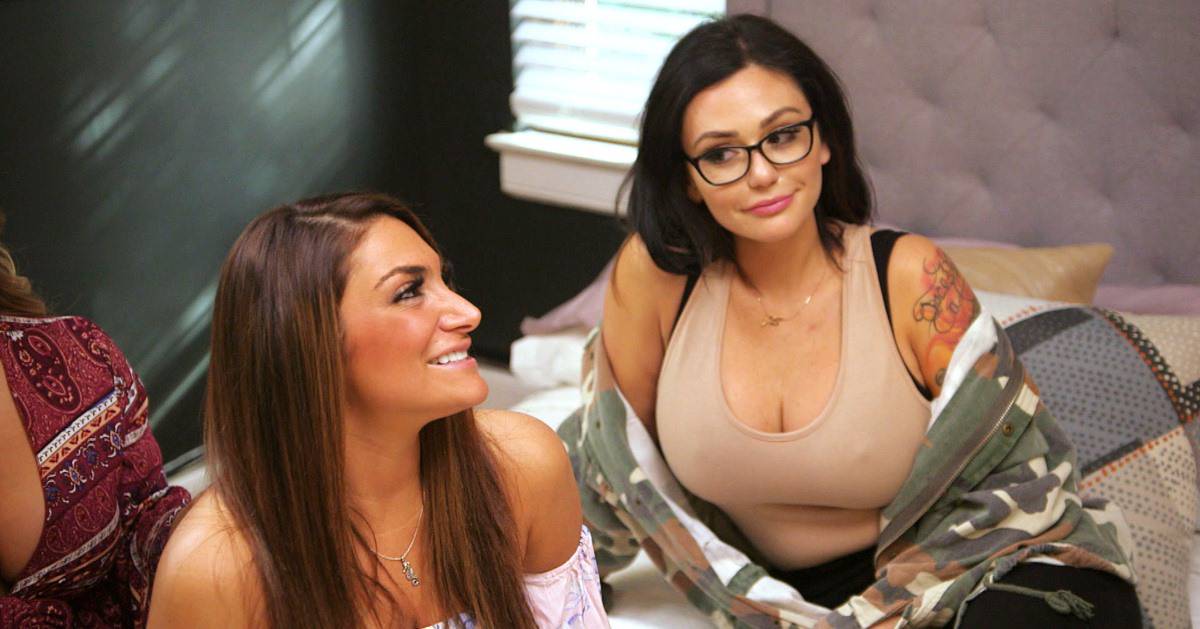 Andddd we’re back. On the Jersey Shore: Family Vacation, the search party is still searching for Snooki’s ring and the only thing Snooks can do is drunk dial her father and wake him up to tell him the news. I’m surprised her dad can understand her between the boozy slurring and the duck lips. In his stupor, Snooki’s dad asks, “You don’t know where you lost it?” Yea, that’ll be a no, Pops. If she DID, then it wouldn’t be lost. Amiright??

Meanwhile, the crew does the unthinkable and finds the ring! It only took five guidos and 3 massive flashlights to complete the search. When Snooki gets the happy news that her ring was found, she abruptly hangs up on her poor father and states, “I feel like me losing this ring is like the spirits telling me to leave.” I DEFINITELY think that’s what it is, Snooks. RonRon talks Snooki off the ledge and tells her she is strong and that she cannot leave because then no one would watch the show. Wait, what? Maybe he didn’t say that, but it’s totally true.

Over breakfast, JWoww gets filled in by The Situation about the previous night’s drama. The Situation admits to JWoww that he at a point, he was out of control, but now he is “the ultimate Mike.” JWoww cannot get over this new Mike and feels like she can open up to him about her past. She explains that right before going to Italy with the gang, she miscarried and was put on downer medication to try to help her get through the rocky time. Because she felt so down in the dumps, she tried to balance that with uppers. The Situation knew exactly how JWoww felt. He states that the reason he got into so many fights with Ronnie in Italy was because he was “going through withdrawals…” and THAT would explain why he thought he could fight a brick wall and win. Finally, during his confessional, The Situation states that “there is hope for the youth…the way The Sitch came out…on top.” Member when he said didn’t have an ego and was humble? Pssssht.

Snooki is still feeling all out of sorts from the ring deal and decides to FaceTime her clones, aka her kids. Is Skinnie Vinnie stretching whilst Snooks FaceTime’s her children? SO weird. Man, “Vin’s the worst.” After seeing her babies, Snooki decides to STAY! Praise be!

Somehow , the Sammi doll has withstood the attempted drowning the night before…and it even looks better than most of the roommates do. We get a peek into Ron’s toilet destroying ways and everyone is super grossed out by the clogged toilets and no longer usable bathrooms. Instead of calling a plumber and fixing the above issues, the crew decides to get out and do something active. Pauly states, “Sometimes us guidos like to do more than just drink and GTL,” so they decide to rock climb. On a scale of one to hilarious, watching these people completely out of their element is hilarious times ten.

They’re struggle bus city, especially Vinnie. Pauly explains, “You can’t rock climb on Keto, bro. You ain’t got no calories.” Ah, yes. That would explain it. Right before the meatballs take their turn to climb, a bet is made. The stakes are high for Snooks and Deena– loser has to clean up Ron’s bathroom mess. I’ve never seen a meatball move up a hill so fast in my life…Deena smokes Snooki, leaving her to the toilets.

Back at the house, Snooki is donning a garbage bag and a large glass of wine. She is taking this cleaning like a champ, as there are multiple ruined toilets and it is horrific. I would be so embarrassed if I were Ronnie. Like, how is this ok on so many levels? Clean up after yourself, dude. And while you’re at it…don’t make your “sister-like” roommate clean up your literal sh*t. Ronnie rolls up with his champagne glass full of something that we all know isn’t champs to laugh his annoying laugh and not apologize for what he’s done. According to Snooki, “this is the dirtiest I’ve ever felt.” That’s saying A LOT.

Ronnie’s girl, Jen, rings the house and meets Vinnie via telephone. They have a nice little chat and then Vinnie hands to phone over to Ron. How awkward is it that Pauly and Vin just sit there while RonRon grunts answers and sits silently with the phone attached to his ear? Upon hanging up with his baby-mama-to-be, Ron states, “That’s what a normal relationship is, Sam” to the doll. Nothing about that is normal, Ronnie. You’re talking to a doll and you’re still in love with your ex gf. Serious problems.

Deena wakes up feeling weird cuz her “hands are swollen.” Ronnie suggests that she may be pregnant, but Deena knows that couldn’t be true since her husband uses condoms. The men of the house are in awe of this phenomenon (“Don’t get me wrong, I get it, but once you get married to someone…”) and they begin the crude convo about “b*sting.” The dudes don’t even know the medical term for it…my goodness.

Vinnie and Snooki have a really awkward thing going on. We were reminded that Snooki and Vin smushed back in the Seaside days and now things are weird. Snooki claims that “Vin’s the worst!!” and no fun and she also cannot allow his body to physically touch hers at any time as it could mess up her marriage. Right. I’m lost, too.

Vinnie announces that “Today, I’m turning Sunday Funday into Sunday Vinday.” This poor guy is on a mission to prove he is actually fun to the roommates who rag on him day in and day out. While attempting to party hard, Vinnie gets annihilated in t-minus 4 seconds cuz the guy eats nothing. Can’t say the same about The Situation. Seems like because he no longer drinks, he in turn likes to eat his feelings, chowing down on delectable bar food such as chicken tenders and fried balls of who knows what. Hey. Whatever it takes.

Whilst dancing and throwing back shots at the pool, the boys get body painted and Vinnie gets an Italian flag. Vinnie is being an absolute try-hard. He wants nothing more than to patch up his relationship with Snooki, but it doesn’t seem likely.

After a long day of Sunday Vin-ing, everyone stumbles back into the house…everyone but The Situation. Poor guy’s dead sober and is stuck listening to these trolls bicker about mending friendships and setting boundaries.

Vinnie decides to confront Snooki and demands to know “the rules” of their friendship. Snooki states that he is “being annoying and he’s disrespecting” her husband. Vinnie wants to know why Snooks is super dramatic . JWoww thinks that Snooki should just “own it” and admit she messed up, but move on. When JWoww goes up to check on Snooki (who has since stormed off), Snooki calls JWoww an idiot because she feels disrespected. Ronnie explains that he “has no idea what is going on”…but alas, Ron, when DO you really know what’s going on? The girls go back and forth, insults are slung, and The Situation just sits back, chomps on some chips, and watches the entertainment unfold.

TELL US – WHAT DID YOU THINK OF THE LATEST JERSEY SHORE FAMILY VACATION EPISODE?