The Real Housewives of New York City Recap: A Rage in the Hamptons 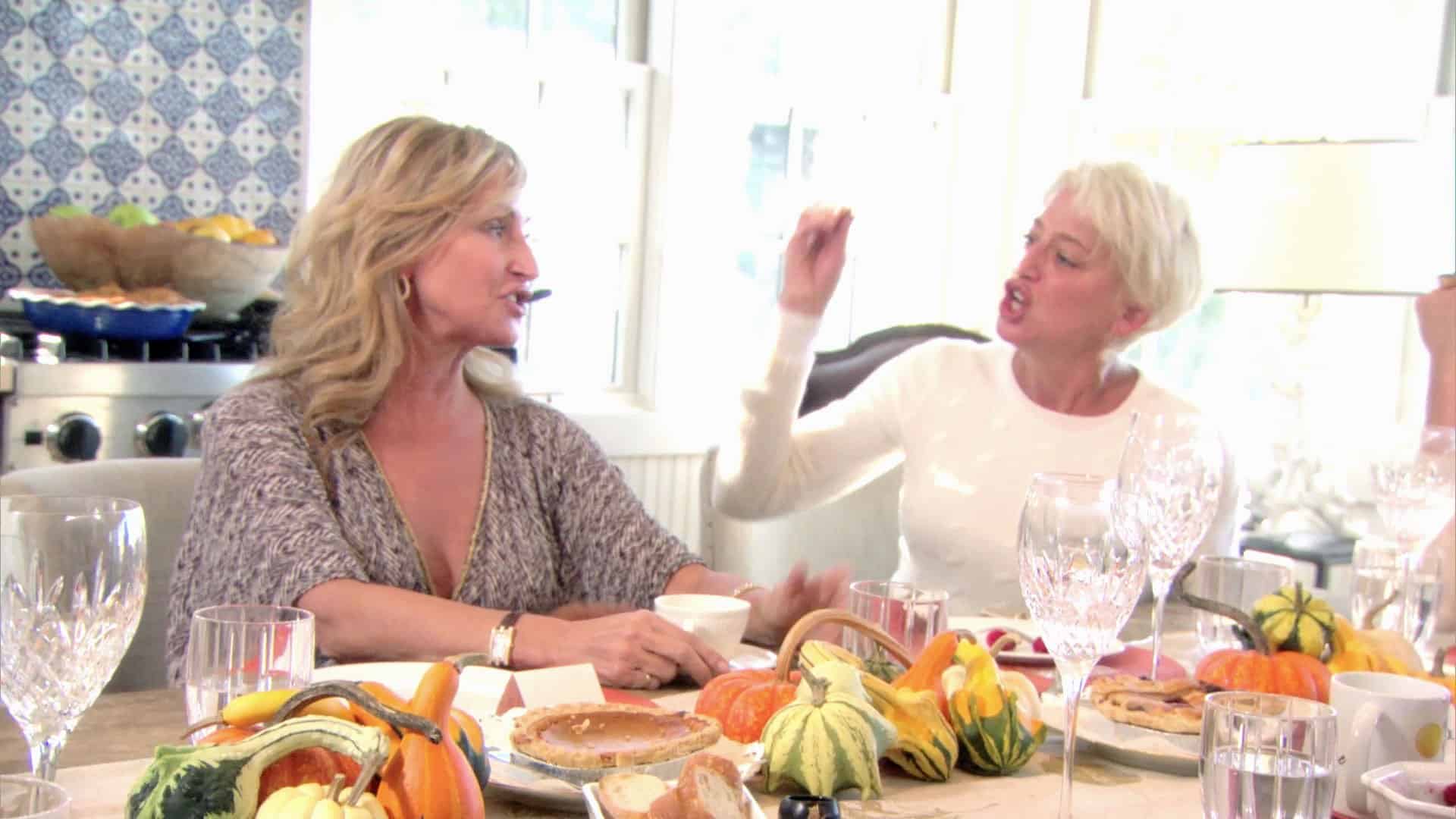 If there are two things that never work out well for the Bravo Housewives, it’s parties and vacations, and on last night’s episode of The Real Housewives of New York City, they did both! It didn’t end well.

The ladies headed to the Hamptons to celebrate Bethanny’s birthday, and Carole’s marathon, and the trouble started before they even arrived.

As usual, almost everyone was mad at somebody else for something. And for the entire ride, the women gabbed about their various grievances with their cast mates.

Carole, Tinsley, and Dorinda are completely over Sonja. Carole said she was “nasty-nice”, meaning she’ll smile in your face, while she’s knifing you in the back, and you’ll never know it until you’re covered in your own blood.

It sounds a pretty astute assessment, and Tinsley agreed wholeheartedly. She was still angry that Sonja told Dorinda that her ex-boyfriend, Scott, was still supporting her financially.

Sonja had no idea why Tinsley was so upset with her, but she felt a distinct chill coming from her, and discussed the matter with Luann when she arrived at her home with her two dogs.

Ok…we have talk about the dogs for just a second. One of them was dyed red! And granted, Sonja said it was only food coloring, but seriously, just…why?!

Once the ladies were settled in, they all planned to go to a local eatery for Bethenny’s birthday party. Apparently Bethenny wanted to make a fashionable entrance, because she arrived 10 minutes late, only to discover her guests were even more fashionable.

She was beginning to wonder if she’d been stood up, when the ladies sashayed in, without a single word of apology. Bethenny let it go, but things were getting tense.

As they settled in with their Pino, talk turned to Carole finishing the marathon, and how proud everyone was of her. It was as benign a conversation starter as you could get, and you would think there would be no way it could possibly result in an argument. But you’d be wrong.

Sonja piped up to say that she’d sent Carole a “beautiful and inspirational” text message to congratulate her, and had only gotten a bland “thx” in response, which she felt was worse than no response at all.

Carole quickly told her to drop it, and she did, but Bethenny picked it up, saying that she had also texted Carole several times throughout the day of the marathon, and had gotten no response, whatsoever.

Now, I’m not sure if running a marathon lit a fire in Carole, or what, but she quickly shut down Bethenny, as well. She said that she did respond to Bethenny, and even produced the receipts.

Ramona was impressed! Usually, she’s the only one bold enough to contradict Bethenny (she’s got the bite marks to prove it), and she was happy not to be in the hot seat for once.

As things quieted down, Luann and Bethenny began discussing Luann’s divorce. Bethenny expressed her sympathy, and it almost seemed genuine, until she sarcastically assured Luann that she didn’t “have to” tell her she’d been right all along.

But Luanne did tell Bethenny she was right, which was clearly better than any birthday gift she could have received because she smiled like a Cheshire Cat, and agreed with her, adding that Tom was a “piece of garbage”.

Luann started to defend Tom, but thought by better of it, and said that she was tired of talking about him. She and Bethenny had been whispering, but it was a pretty small table, and the others were openly eavesdropping.

Tinsley once again implored Luann to talk to them…she REALLY wants the dirt! Luann declined, saying that she didn’t appreciate how intrusive Tinsley had been the first time she asked.

But Luanne is a pretty good sport, and she’s trying to stay positive and move on, so she stood up, and belted out an enthusiastic, if tone deaf, Marilyn Monroe-style rendition of “Happy Birthday”. The ladies all joined in, and danced their way out of the restaurant.

Now, any housewife knows that half the point of throwing a party, is discussing what everybody did, said, and wore, over mimosa’s with your real friends the next day.

Bethenny invited Carole and Tinsley to brunch, where they filled Bethenny in on why Tinsley was so angry with Sonja, but Bethenny didn’t get it. She reasoned that if Scott wasn’t paying Tinsley’s way, her family must be, and she didn’t  see any  difference between being a “kept woman” and being a “trust fund kid”. I would think the difference is obvious, but I see her point.

In the meantime, Dorinda, Ramona, and Sonja were having their own debriefing session at Luann’s, where Sonja expressed her confusion about why Tinsley was so angry with her.

Dorinda tried to explain it to her, but, as always, Sonja was too preoccupied with herself to listen. As she droned on and on about her anti-depressants, her daughter’s boarding school, and her diet, Dorinda became visibly annoyed.

When Sonja began discussing the work being done on her home, and the problems with her contractors, she jokingly said that Ramona “loves them hard and leaves them fast”. The implication being that Ramona’s relationship with her former contractor, Mario, had been more than business. No one thought it was funny.

Ramona said that Sonja had been completely “MIA” for months, and had no idea what’s going on in her life. She went on to say that they all needed to be more cognizant of how they spoke to, and about, one another.

Sonja said that she wasn’t trying to be insensitive, and was having a hard time “expressing herself”, but Ramona assured her that she was making herself quite clear, and everyone knew exactly what she meant.

Sonja had the nerve to look bored when Dorinda brought up her late husband, saying she’d brought it up “thousands of times. To highlight Luann’s point about all she had been through, Sonja started to bring up her divorce. And that’s when Dorinda really lost it!

She screamed at Sonja, saying that she better never try to compare her divorce to her husband’s death. She went on to say that she had been in love with her husband, but that Sonja had “married a friend”, whom she had “f***ed around on” in the South of France.

It escalated from there, with Dorinda screaming, cursing, and pointing in Sonja’s face, before stomping off. Sonja tends to bring this sort of reaction out of people. It’s part of her charm.

Well, it took three episodes, but we finally got some real drama. And there’s plenty more to come. Next week the ladies will continue their Hampton’s trip, and previews show another party, which will surely lead to another fight. Stay tuned!