Real Housewives of Beverly Hills Reunion (Part 1) Recap: For the Love of Lisa 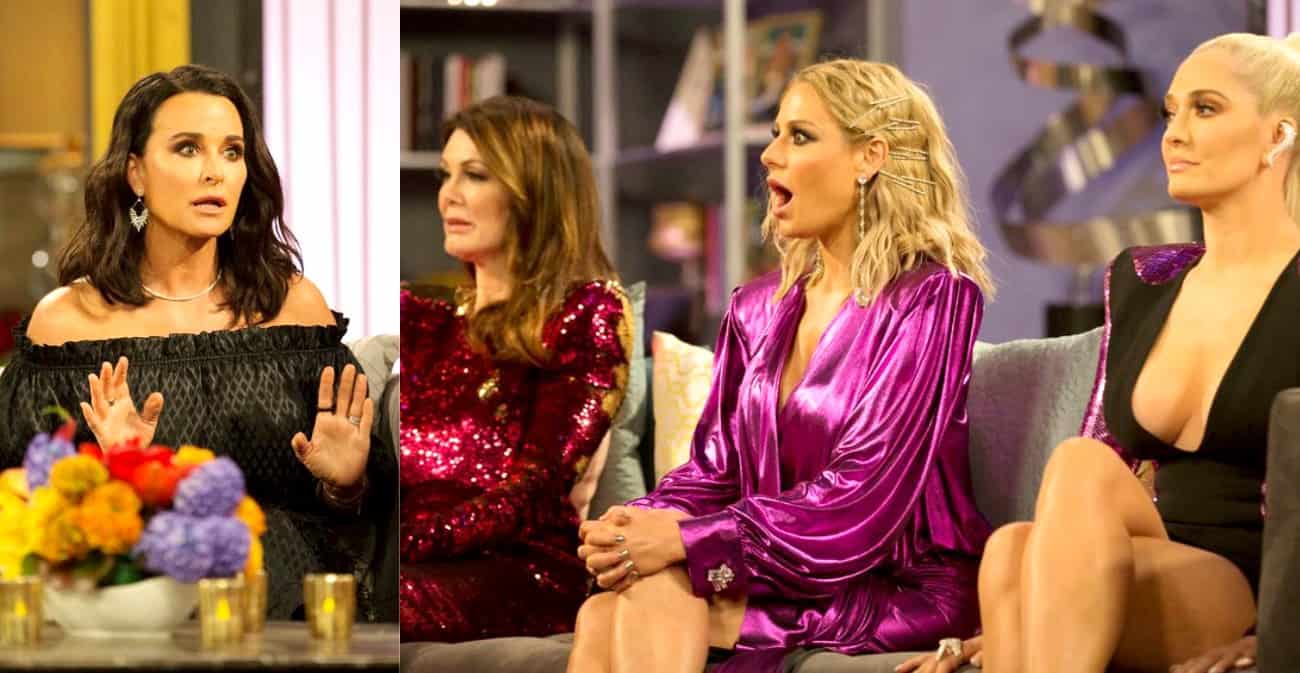 I am loving this pre-reunion meet up that Andy Cohen is holding with all of the women of the Real Housewives of Beverly Hills. You get a taste of how much actually goes into getting these girls decked and it appears as though sequins are the trend for this reunion. We’ve got some fresh cuts and fresh styles and it seems like Rinna’s head may actually fall off with all those curls…she legit looks like a bobble head.

To kick things off, Andy addresses how Erika, Kyle, and Dorit all found “great” success in their forties. Erika doesn’t seem pumped about her book, but I think it may seem that way cuz of all the fresh work she has had done on her face. Either that or her pony tail is just pulling her face so hard she can hardly blink her eyes. Erika behaves almost alien-like, especially when she discusses her temper. Again, zero expression. Andy digs deeper to find out why none of Erika’s family members have read her book yet…ya know, like her mother or her HUSBAND. The poor guy’s the reason why you have any ounce of celebrity, yet all that Erika says is, “I speak about him very kindly. I mean, he sounds great.”

Rinna, the human disco ball, shares how she doesn’t think she would go back into a full-time soap opera gig…cuz she was never offered a full-time soap opera gig. On the flip side, Dorit states that her Beverly Beach swimwear line is doing fabulously. Dorit named a bathing suit after each of her friends…except she left Camille and Teddi out on “purpose.” Dorit says the reason she chose to not name a suit after Teddi is because “Teddi is one person to my face, and then another behind my back.”

I hope everyone at home is rolling their eyes as much I am. Teddi claimed that she thought Dorit was her friend, but after viewing the season, Teddi knows that Dorit is just a big fat faker. According to Dorit, she received “lovely texts” from Teddi and actually thought she was friends with Teddi, too. Sooo what exactly went wrong with these two? It may be because Dorit speaks “dismissively” to Teddi or that Dorit is just an awful human being. Either one.

During Teddi’s segment, she gets super emotional about her “selfish” choice of picking a boy egg. She is beating herself up because her son, Cruz, has a heart defect, and Teddi blames herself for this. Dorit quips that Teddi should just, “Get a dog from Vanderpump dog rescue center.” Holy hell, Dorit. Have a little compassion for once in your life!

Teddi shares that she actually had “real jobs,” as opposed to careers such as “professional equestrian” and “accountability coach.” Despite her famous dad, Teddi worked in a post office and even in a restaurant. Upon hearing a mention of Teddi’s father, Rinna is super forward and demands to know why the ladies have yet to meet John Mellencamp. Leave it to Rinna…

Upon reviewing Rinna’s behavior this season, the girls think she was “removed,” whereas Rinna states she just “chose to react differently.” Not too different, though. I mean, Rinna flips the bird at “Jeremy, from Queens” because the viewer called her boring this season. I have to agree, Jeremy from Queens. Other than the fact that Rinna’s 19 year old and 16 year old daughters claim to know how to give blow jobs because they read their mother’s book, Rinna was a huge yawn. But, it is clear: Rinna’s daughters “love to blow” up her spot…pun intended.

Oh boy…I was hoping that the “who do you love more, LVP” issue would somehow miraculously get swept under the rug, but alas, where’s the fun in that for a reunion. I brace myself for the ridiculousness that is about to ensue… Erika believes that “Kyle and Dorit are competing to be” LVP’s best friend and LVP is truly “eating it up.” It almost reminds you of one of those cheesy dating shows from back in the day. Although, the recipient of Lisa’s final rose is yet to be determined!

As Kyle tries to explain her feelings, LVP (shockingly) interrupts Kyle left and right and when Kyle states “let me finish,” LVP simply responds, “no.” Kyle knows that the only way to get her point across is by yelling through the madness. Kyle feels like LVP and Dorit planned to “stick together” and gang up on Kyle. She doesn’t understand why LVP chose to side with Dorit over and over again. “It didn’t feel authentic and genuine” to Kyle.

I cannot even deal with Dorit and her bobby pin explosion on her head. She tries to “sugarcoat” her apology with LVP and feels that Kyle is “a bit competitive with Lisa.” I say next year, just replay the ENTIRE SEASON during the reunion because none of these women seem to remember ANYTHING they’ve said or done in each episode. Take for instance the beach house scenario. Dorit remembers the way it all unfolded quite differently than the way it actually occurred…a phenomenon that happened rather frequently with Dorit.

Thank God for Kyle, keeping it real. Kyle threatens Dorit, “If you’re gonna bring it up, you better remember it correctly.” Evidently, the video tapes don’t lie. Dorit lives in an absolute la-la-land. She over-exaggerates everything, up to and including her stupid fake accent. Dorit finally admits that she doesn’t “think before she speaks…” and we are all just sitting there like yea, no kidding.

Erika stays relatively quiet throughout the reunion until PantyGate gets revisited for the 100th time. Erika states that she was very confused, particularly because Kyle got so upset with her for not speaking up when Dorit attempted to blame Kyle. Rinna doesn’t like the way Kyle stormed off during the last episode of the season. Erika and Rinna do not appreciate some of the things Kyle said about them, but they accepted her apology…unlike Dorit. Dorit is absolutely delusional and borderline hard to stomach. The lady never takes an “I’m sorry” from anyone…unless of course, it’s from LVP.

I never thought the day would come that Rinna would actually be giving the words of wisdom: “you have to let it go.” You can say that again, Rinna. Too bad there’s a whole other reunion episode, which I am sure is chock full of drama and unaccepted apologies, some of which Rinna is most likely directly involved in.

TELL US – THOUGHTS ON THE RHOBH REUNION PART 1?