by Tiffany Brown May 3, 2018 194 comments
ShareTweetWhatsappPinterestRedditTumblrMailFlipboard 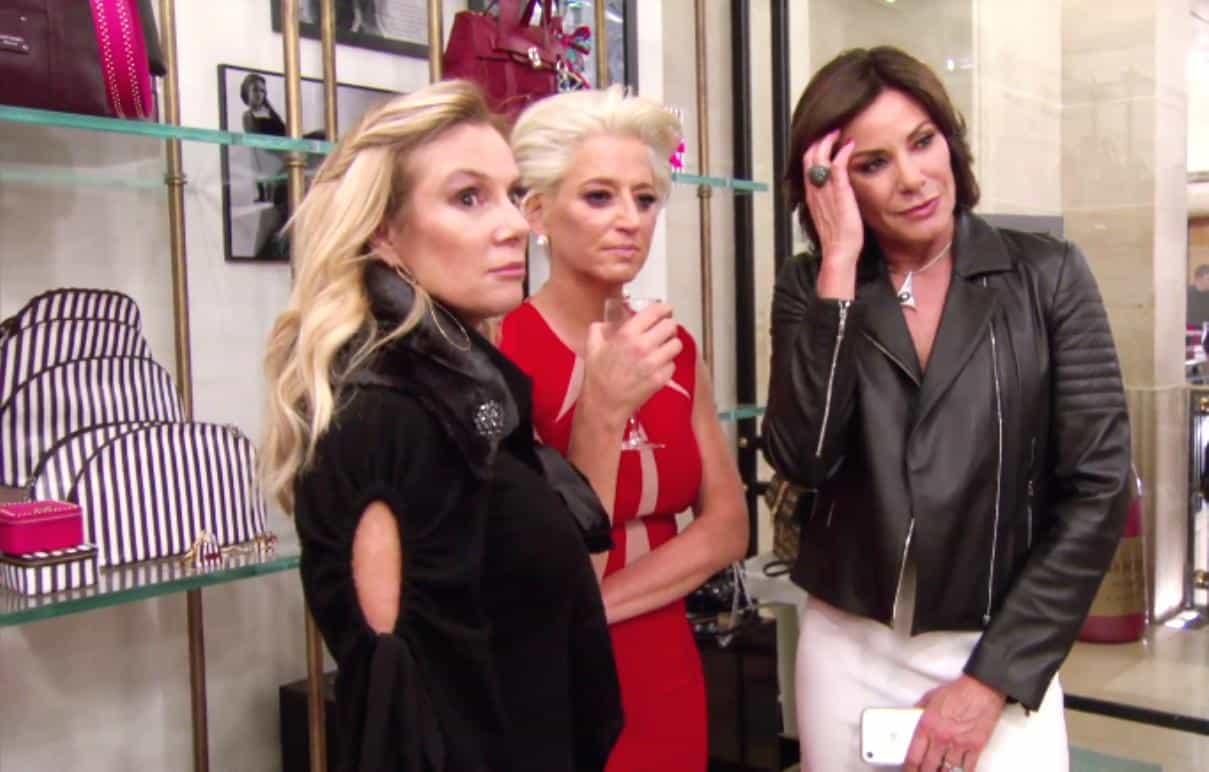 Last night’s episode of The Real Housewives of New York was a whirlwind! There were reconciliations, run-ins with rivals, and even some romance. Here’s how it all went down..

Ramona decided she was going to throw a  Christmas shopping party. What even is that, you ask? I have no idea.  These women will use any excuse to throw an “event”.  But before the party, the ladies decided to at least try to squash some of the issues between them. To that end, Carole invited Luann to tea so they could discuss the “elephant in the room.”

The two women have never been all that close, but neither could actually pinpoint a reason for the tension between them. However, Luann did admit to feeling a little hurt that she never got a condolence call from Carole after her split from Tom.

Carole said that she felt a phone call would have been insincere. After all, she’d never approved of Tom, and like everyone else, had predicted that their marriage would end quickly and disastrously. Besides, Carole pointed out, the phone rings both ways, and Luann hadn’t called after her breakup with Adam, either.

Luann felt like it was tit for tat, a game she simply doesn’t wish to play anymore, but also pointed out that Carole and Adam hadn’t been married, and ending their courtship was quite different than a divorce.

Carole maintained that the breakup was difficult, and informed Luanne that she was well aware of the “pejorative” terms she’d used to describe Adam, like “Toy Boy”, and that she didn’t appreciate them.

Luann laughed it off as a joke, and even said it was a “compliment” because she’d always liked Adam. Carole didn’t seem to completely buy it, but, as she said “you can’t take the countess out of the girl”, and this was as close to an apology as she was likely to get.

I mean come on, this is a woman who unabashedly showed up to a Halloween party in black face, and actually calls her driver “Driver.”  She’s an acquired taste, for sure, but Carole seemed willing to try.

Everyone else was still pretty preoccupied with Sonja…especially, well, Sonja! She paid a visit to Bethenny to talk about herself and play the victim, a role for which she should get an Academy Award…every. single. year.

Sonja was still licking her wounds following her huge blowup with Dorinda in the Hamptons, after she compared her divorce to Dorinda’s loss of her husband.

Bethenny was the only one of the ladies who even tried to see Sonja’s side, and she continued to sympathize, saying that the others were treating Sonja like a leper, which she found mean-spirited and immature.

Sonja agreed wholeheartedly, and was especially angry at Ramona, who she felt hadn’t defended her vehemently enough during the argument. Sonja explained to Bethenny that “even prison b***es have someone they’re  loyal too”, but Ramona was incapable of being loyal to anyone.

Bethenny felt that was taking things a little far, and advised Sonja to “talk less and say more” in her dealings with the women going forward. Translation: no one can stand you, so sit the hell down, and shut the hell up, you exhausting woman!

Tinsley is also pretty fed up with Sonja, and the feeling is mutual. After opening her home to Tinsley when she had no place else to go, Sonja was hurt that Tinsley didn’t seem all that appreciative, and spoke to other people as though moving out of Sonja’s was like breaking out of a prison.

It wasn’t exactly the nicest way to treat someone who had genuinely tried to help, and Sonja retalitiated by telling everyone that Tinsley was still being “kept” by her ex boyfriend, Scott, who she said was still paying her rent and had likely even purchased the $5k gift card Tinsley had given her as a thank you.

This was just petty, and Tinsley was rightfully angry. Implying she couldn’t support herself was bad enough, but questioning the gift just added insult to injury. When, and if someone ever gives you a gift card for $5k dollars..just shut up and take it. It’s 5 THOUSAND DOLLARS! Does is really matter who bought it?!

Tinsley and Sonja were both dreading another ugly encounter after the harsh words they’d exchanged at Ramona’s dinner  party last week, but as it turned out they needn’t have worried.

Tinsley broke the very first rule of girl code, and decided to blow off Ramona’s party the minute Scott showed up on her doorstep unannounced.

It was a big surprise, and Tinsley was thrilled. And I mean screaming at the top of her lungs, rolling on the ground, making a complete fool of herself, thrilled. Seriously, her reaction was like that old footage you see of school girls crying at Beatles concerts. The girl has ZERO pride.

Prior to Scott’s arrival, Tinsley had been planning a trip for the weekend to see him in Chicago, and was both hopeful that they would become “boyfriend and girlfriend” again, and fearful that he’d end things for good.

She’s quite smitten with Scott, and said she admired his ambition, and the fact that he’s a completely self-made man. But the distance between them made the relationship untenable…or maybe her constant fawning made him uncomfortable… but either way, Scott stopped being her “boyfriend”, which I assume also means he took back his class ring.

But when Scott surprised her and asked her to come to Chicago with him that night, she just knew it meant he was back for good. In fact, she showed him some flowers that Carole had given her when they broke up, and that she’d  intended to keep until they were back together, which didn’t make her sound crazy or stalkerish, AT ALL, and asked if she should finally throw them away.

Scott actually laughed at first (who wouldn’t?!) but ultimately told her to go ahead and toss them, which she happily did .

Once they were on their way to the airport, Tinsley called her mother, who was equally excited that Scott was back, and immediately started making plans to knit him his very own Christmas stocking. The poor guy got A LOT more than he’d bargained for!

When it was finally time for her party, Ramona showed up in boss mode, moving the decorations, and ordering around the staff in an effort to make everything perfect for her guests.

But perhaps she should have left the decorations alone, and been a little more discerning about her guest list, because she invited her friend, Missy, who also happens to be Tom’s ex girlfriend, whom he was dating when he met Luann, and whom he continued to flirt with throughout their marriage.

Everyone was completely shocked that Ramona could be so insensitive, but she defended herself, saying that Missy  was her friend too, and that since it was a larger party, she saw no reason why it should be awkward. Seriously, Ramona?!

But you would have been proud of the countess. She appeared completely unphased, and even exchanged pleasantries with her formal rival. In fact, by the end of the night the two women actually seemed to have bonded! At the very least, they agreed that their problem had always been with Tom, and never with each other.

And it might have been the beginning of a beautiful friendship, but then Luann discovered that the cute, younger guy that had been flirting with  her was actually there with Missy, and decided that maybe she and Missy had TOO MUCH in common!

With everyone taking the high road, the evening was off to a pretty promising start…and then Sonja showed up.

With Bethenny off working to bring aid to storm ravaged Puerto Rico, Sonja didn’t really have any allies at the party, other than Luann, who pretty much just feels pity for her.

When she was left alone with Ramona, the two just stood avoiding eye contact until Ramona broke the ice by brushing something off of Sonja’s face. After that, the flood gates opened, and Sonja once again confronted Ramona for not having her back, and at least defending her when Dorinda accused her of cheating on her ex husband.

Ramona reminded  her that they’d  barely known each other when Sonja was married, and that, therefore, she had no way of knowing if she’d cheated on her ex, or not. She went on to say, once again, that the blowup with Dorinda had been Sonja’s doing, and she still needed to apologize.

Sonja said she had done nothing to be sorry for, and was tired of no one showing  any sympathy for her. Ramona said that Sonja was too derisive, and would end up without any friends if she wasn’t careful.

The two women then began yelling unintelligibly at each other with their hands cupped around their mouths as though they were yelling across the room, and not standing within inches of each other.

Ramona walked away, and announced that Sonja was “out to lunch”, and couldn’t be reasoned with. She was so I frustrated and spent that she walked out of her own party, leaving her guests to assume it was over.

Well, there you have it. Another party…another disaster! But will the finally learn their lesson? I sincerely hope not. Parties are where the best fights happen!

The ladies will be back at it next week, and previews show Dorinda joining Bethenny on an ill fated trip to Puerto Rico, and Carole revealing some shocking news about Adam. Stay tuned!