by Julia May 9, 2018 30 comments
ShareTweetWhatsappPinterestRedditTumblrMailFlipboard 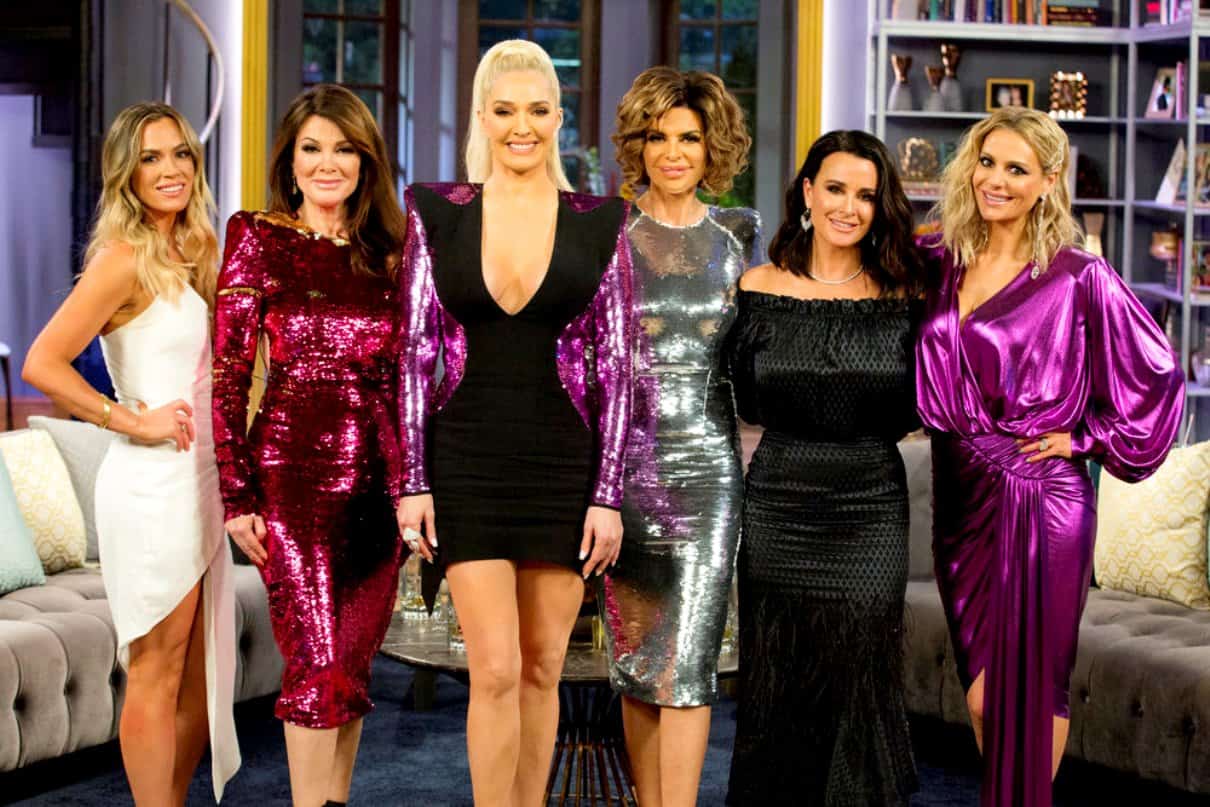 This is it. The third and final part of the Real Housewives of Beverly Hills reunion.

Last week left off with Dorit questioning LVP’s intentions with the Beverly Hills Lifestyle Magazine photo shoot. LVP had asked Dorit to be the model, but Dorit threw a fit about the photos and thus the issues between these two emerge yet again. Dorit demands to know if LVP was trying to “punish her” by cutting off her head in every photo. Erika (and everyone else for that matter) thinks that it was a huge F U to Dorit and even Kyle jumps on the “chopped Dorit’s head off” bandwagon.

I love how LVP tries to keep a straight face when she says it was not meant as a “punishment.” Yea…right. LVP attempts to explain that they did not want any negativity in the magazine, hence the hand and décolletage photos. Everyone’s just about over this back and forth and they all agree that there are never any winners in this group. With that, LVP states, “We’re a bunch of losers, let’s get used to it.” Ya hit the nail on the head, girlfriend.

The attention turns to the new friendship between LVP and “Teddi Bear.” Turns out that Teddi is Ken’s nickname (who knew?!) and that is going to be the name of LVP’s first grandchild (another shocker of a tidbit!). No wonder LVP has such a soft spot for this new girl…but never fear, Dorit. You’re still LVP’s number one blonde. I mean, she defends you to the end (LVP explains that because Dorit talks too much, she forgets the “accuracy” of what she says. Huh?) and stands by her pal no matter what.

We get a chance to relive all of the women’s poor German accents and American ways (i.e. “chin” basil) during the “Berlin or bust” segment. Dorit gets all choked up when they discuss the Holocaust Memorial because she “did lose a lot of family and uh, it’s just that simple.” Rinna explains that the horse incident was in fact, very scary, and applauds Teddi for being her hero. And I am beyond thrilled that Andy pointed out the Erika nearly DIED at the hands of a German bicyclist…one of my favorite moments all season. Erika explains that if she HAD gotten hit by the bike, she “probably would have just tangled up and died.” That would have made for a helluva girls’ trip!

“Why was it so upsetting that Kyle forgot Nanny Kay?” (LVP’s grandmother). The whole Kyle/LVP friendship game is getting exhausting. And by exhausting, I mean played out, tired, dead. Kyle plays hardball by asking LVP if she knows HER grandmother’s name and of course, LVP does not! SO. WHY IS THIS AN ISSUE AT ALL, LADIES? In true LVP fashion, she doesn’t let up because she desperately wants to end on top in any type of fight scenario. LVP shares that “Most of the conversations between us are about you.” Ouch, LVP. She tries to backtrack by saying that she tries to be an older sister to Kyle (“You’re always in a tizzy and I always calm her down”). It took a LONG time for LVP to get to her point across (aka: make it clear that she is right-about what exactly I am not 100% sure) and along the way manages to chop down Kyle over and over again. Yup. Best friends.

“Kyle is an American woman living the American dream.” Anyone else having a hard time trying to wrap their minds around Kyle’s producer role? Kyle shares that she is not nervous about her sisters seeing the show. In fact, she is eager! Kyle talks about her strained relationship with her sister Kathy, despite Kyle’s attempts to explain that the show is “inspired” by their lives. She also thinks that there is a family rift because Mauricio left a family business to go out on his own. Seems like Kyle’s “ideas” she “creates” are waaaay too similar to what is actually happening in her life. “Family means everything to Kyle,” yet she continues to “produce” television shows that tick off her sisters and cause drama. I guess it’s worth it to Kyle.

Erika looks like she is on a sedative. She sits on that sofa, hardly blinking and I can’t tell if it’s cuz her pony-tail is too tight or because she had a ton of work done. As she robot speaks, Erika needs to know why Teddi “challenges her integrity.” Did we all forget that Teddi, the accountability coach, apologized and apologized and yet we are STILL discussing this issue? Teddi claims that, “I’ve never been spoken to the way you speak to me.” Erika is not taking ANY responsibility for her behavior toward Teddi and says to Teddi, “I think you are much stronger and calculated than you lead on.” Everyone’s jaws are on the floor, but you better believe no one is stepping in to face the wrath of Erika Jayne…especially not once Erika booms to Teddi, “Raise up or get the f*ck out, come on girl.” I am not quite sure WHO Erika thinks she is. Has she been getting lessons from LaLa on Vanderpump Rules?

Teddi retaliates and says,“I don’t need to rise up to say something I’m going to regret.” I applaud Teddi for standing up to Erika. For reasons I will never understand, Erika has chosen Teddi to lash out on all season. Take for instance, Teddi’s beach house. We can’t forget how Erika left the house to sleep in a hotel after claiming she had “cramps” and the “worst period.” Some of the girls STILL aren’t buying it and feel that Erika left because her glam squad was not able to stay at Teddi’s beach house. Erika corrects the women by stating, “My assistant is not my glam squad” met her at the DoubleTree hotel. I mean, I kiiiiinda believe Erika’s cramp story now. We all KNOW she would never be caught dead at a DoubleTree unless of course the circumstances were dire.

On and on this Teddi/Erika battle rolls on, but Erika takes it next level by saying that Teddi “bullied” her. When questioned about her blog, Teddi says that, “Cathartically, I needed to” write about her experience with Erika. Dorit looks puzzled and I’m pretty sure it’s because she has NO idea what “cathartic” means. Someone hand her a dictionary, please. Erika, the self-proclaimed a*shole, believes that she takes total ownership over her behavior, but I’m not buying it. Is this how a “cool girl” should behave??

As Season 8 comes to a close, Andy makes his rounds with each of the women, looking for final thoughts.

Teddi: “I’m leaving more educated than when I came in.” If you’re more educated NOW, then I would hate to have seen what you were like before. Please Teddi. Disregard anything you might have “learned” from these maniacs over the course of the season…

Rinna: She promises that the “old” Rinna will be back…Thank goodness because this season she was an absolute snooze.

Dorit: “You learn a lot about yourself.” Now, what did you learn, Dorit? That you’re fake accent is getting increasingly more difficult to tolerate and that you are a lying wanna-be fashion designer?

Erika: “There are so many great things coming through.” As long as Mikey, her creative director is there with her, I have no doubt that Erika will continue saying “yes,” until the Erika Jane Train stops most likely sooner than later.

Kyle: “I expect a lot back” from friends. Glad to see she has made a new one (Teddi), but hopefully she can salvage her one-sided friendship with LVP…because that’s a healthy one. (not)

LVP: “This has been an extraordinary experience…” Did these women watch the same season I did? On top of that, LVP explains to the fans that, “Dorit has been largely misunderstood” and begs the audience to give her a second chance. Who is LVP? Dorit’s rep? So strange.

Andy Cohen decides to make a toast with some champagne, straight from Germany. All the women rise and toast to “friendship, supporting one another, and working through our issues.” That toast could not be further from the truth, but alas, these women live in a bubble and have no concept of reality…except for reality TV. Until next season, friends!

TELL US – WHAT ARE YOUR THOUGHTS ON THE REUNION AND THIS SEASON OF THE RHOBH? WHICH HOUSEWIVES WOULD YOU LIKE TO SEE RETURN OR EXIT THE SHOW NEXT SEASON