by Julia May 2, 2018 97 comments
ShareTweetWhatsappPinterestRedditTumblrMailFlipboard 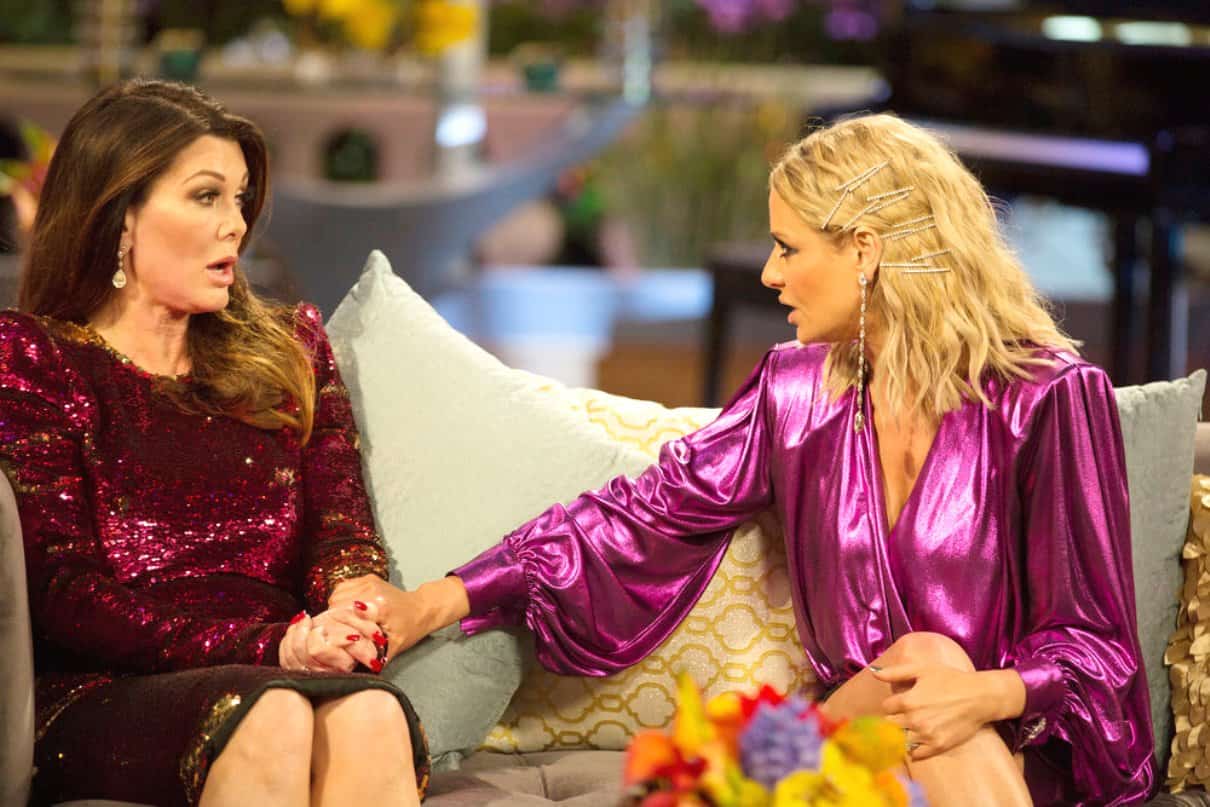 As if last reunion didn’t deliver enough drama, the Real Housewives of Beverly Hills are back once more, ready to stir up the pot, and ready to rumble for part two of the reunion.

The women’s “glam squad” segment is completely outrageous. The money they spend is totally insane…and the girls make no qualms about their glitzy, glamorous lives. I mean, Erika even states, “I’m all about being pretentious.” Who says that?! I guess a woman who wears pink wigs and latex blouses does. Speaking of latex, Erika gives all the deets about her look in Berlin. Despite the sweating, baby powder, and sickness, Erika explains the red latex was all worth it. She later clarifies that she spends $40,000 a month on “glam” and continues to reveal that Erika Jayne is bringing in enough income to cover her lifestyle. Psshht. By “Erika Jayne” I think she means her husband Tom. Remember him? Yea, I don’t either.

Meanwhile, Teddi gets called out for her “lack of fashion care,” yet she got 210 cc boobs right before the television show began filming. According to Andy Cohen, “boobs are the universal unifier.” All the women agree, which is hilarious. The only one NOT laughing is Kyle. She is too busy reminiscing about all of the bags and jewelry shown in the video montage that she no longer has because of the burglary that occurred at her new house. Kyle estimates that she was robbed of about $1 million worth of jewels and bags [Did anyone catch that Reality Blurb shout out??], some of which cannot be replaced. The sentimental aspect is totally upsetting, especially because nothing has been recovered by police. To make it a little easier for Kyle, LVP, the real MVP, bought Kyle a fresh Chanel bag to restart her collection. That’s the kind of friend I need in my life. Where is my LVP!? 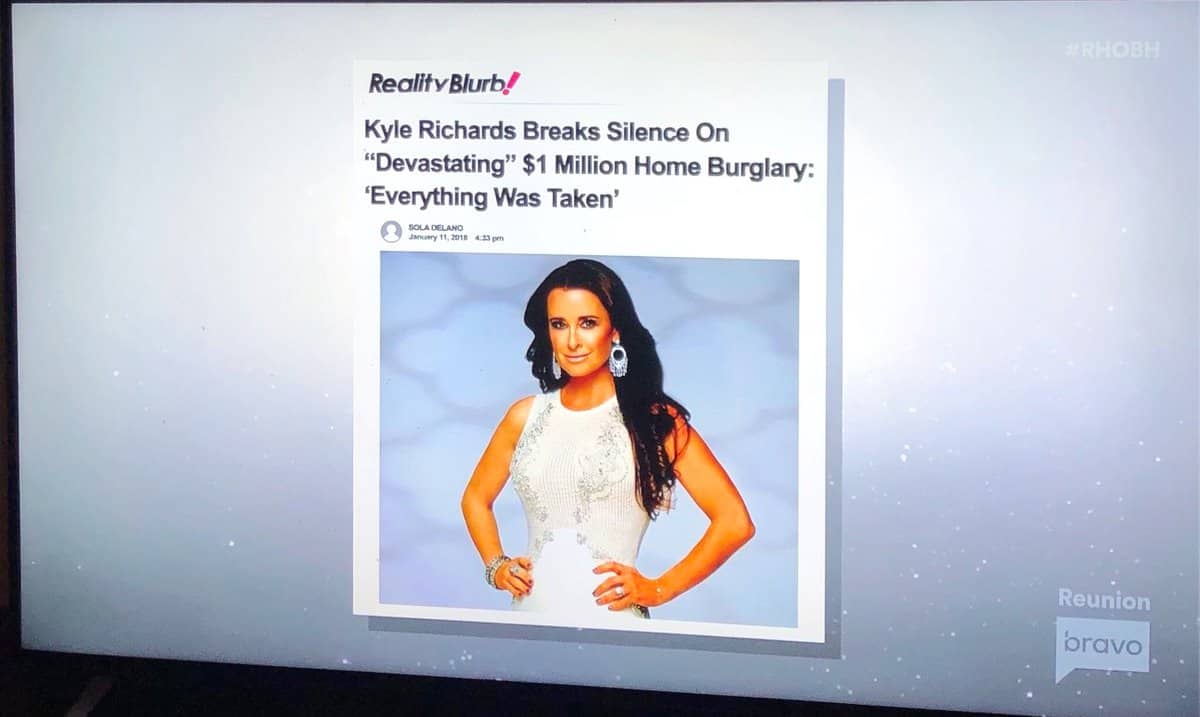 “First I wanna start because this is really important…” Dorit APOLOGIZES, ya’ll! She gave a legit apology to Rinna for all of the nasty things her husband has said about her in the past. Seems like PK, Dorit’s husband, has made amends with all of the ladies, Erika, included. It’s nice to see this “genuine” growth Dorit has had over the course of the season. I mean, Dorit and Erika got along like two peas in a pod, especially while learning the sexy performer ways Erika knows so very well. Despite all of the lessons, can we all agree that Dorit missed the mark on the “slow, languid, catlike” moves Erika Jayne carries out like a boss?

Later, Camille joins the gang out on the sofa and she discusses her engagement ring. Camille spent a lot of time being filmed this season and some could say she is the come-back kid, particularly after her past stint on the series. This time around, “Camille didn’t come to play, she came to slay!” I have to admit, Camille definitely rivals Erika with those dance moves.

The difference is Camille knows when to stop. She also knows when the ladies need to be told “stfu.” However, I feel like Camille is desperately seeking an invite to rejoin the cast for next season (I wouldn’t be mad about it). I mean, she’s wearing the ball-gag she gifted Dorit as her “accessory for the evening.” Stay relevant, girl. Naturally, this whole ball-gag thing opens up old wounds. Dorit gets called out for her inappropriateness and Camille states she felt like she was getting attacked by both Dorit and PK. At the end of the segment, Andy takes the ball-gag for the clubhouse because …duh.

The women break for lunch and Dorit goes to hang with LVP in the interim…aka talk smack about the other ladies, especially Teddi. Evidently, LVP needs to strip down to a robe and re-do her hair during her lunch breaks. Hilar. Dorit, obviously, discusses Teddi and how she can’t let things go.

Oddly enough, Teddi is venting about Dorit to her new BFF Kyle simultaneously. The women head back on set hot and ready to fire back. Now comes the drama. The Teddi vs. Dorit battle royale. Some people believe Teddi is the “sh*t stirrer,” despite the fact that Teddi apologizes again and again and again. Teddi states that when she does something wrong, she admits it. She’s an “accountability coach,” after all. Teddi and Dorit have so many “issues” that it is difficult to keep them straight.

One of the aforementioned issues is glass-gate. Remember when Dorit asked for the proper type of glass for her wine? She’s lucky she even got a glass and wasn’t greeted with a bag of wine like some folks have at parties. I say we just have Dorit tuck and roll her way off the couch and have Camille take her seat for once and for all. Dorit is painful- she dislikes when people “pour wine in the wrong glass,” is perpetually late, and TALKS IN A FAKE ACCENT. How are we forgetting this?!

Best Tweet ever gets awarded to Camille: “Beverly Beach or Beverly B*tch…” LOL. It is interesting how Teddi and Camille are the only two ladies of the group who did not have a swimsuit from Dorit’s collection named after them. That seems to be a pre-meditated dig on Dorit’s half, but she just sits there doe-eyed and confused, playing the victim.

Teddi demands that Dorit stop “gaslighting the conversation.” YES YES YES. Dorit believes that right now, she needs to proceed with caution when it comes to a friendship with Teddi. Funny. Seems to me that everyone else needs to heed Dorit’s statement as well. Before the segment wraps, Dorit proudly says, “I, with pleasure, will own what I’ve done and said.” Let’s make Dorit tattoo that phrase on her forehead so that when she forgets, she can snag a look at herself and remember to stop acting like a troll.

During a break, Dorit runs off to use the restroom and Camille just so happens to be heading off the set at that exact moment. Interesting how that happens and even more interesting how the women use that small ounce of time to express their love for one another and repeat any final apologies necessary to have the season end on the right foot. #ratings.

“If life is a card game, then you better play your hand wisely.” LVP is essentially royalty so it makes sense that the queen gets saved for last. I mean, the woman sends “messages” to people she doesn’t like and makes grown women fight for her friendship. She’s kinda like a mob boss. The type of lady you always want on your side. Dorit realized that a little too late. Regarding LVP’s magazine shoot for the Beverly Hills Lifestyle Magazine cover, Dorit “made it about” herself, when it was really all about the jewelry.

LVP states that it wasn’t that big of a deal that Dorit did not have her OWN hair and makeup team with her to prep for the cover shoot. LVP also did not appreciate how Dorit bashed the hair and makeup team supplied. Dorit did not appreciate how LVP was not up front about not using her (whole) photos. The women are going back and forth until Dorit asks, “Did you cut off the head [of the picture] to punish me?” The answer is yes, Dorit. LVP said it herself: “That’s what we do in England. When you misbehave, it’s off with your head.”

Bye, girl. That is until next week…

TELL US – THOUGHTS ON THE RHOBH REUNION PART 2?