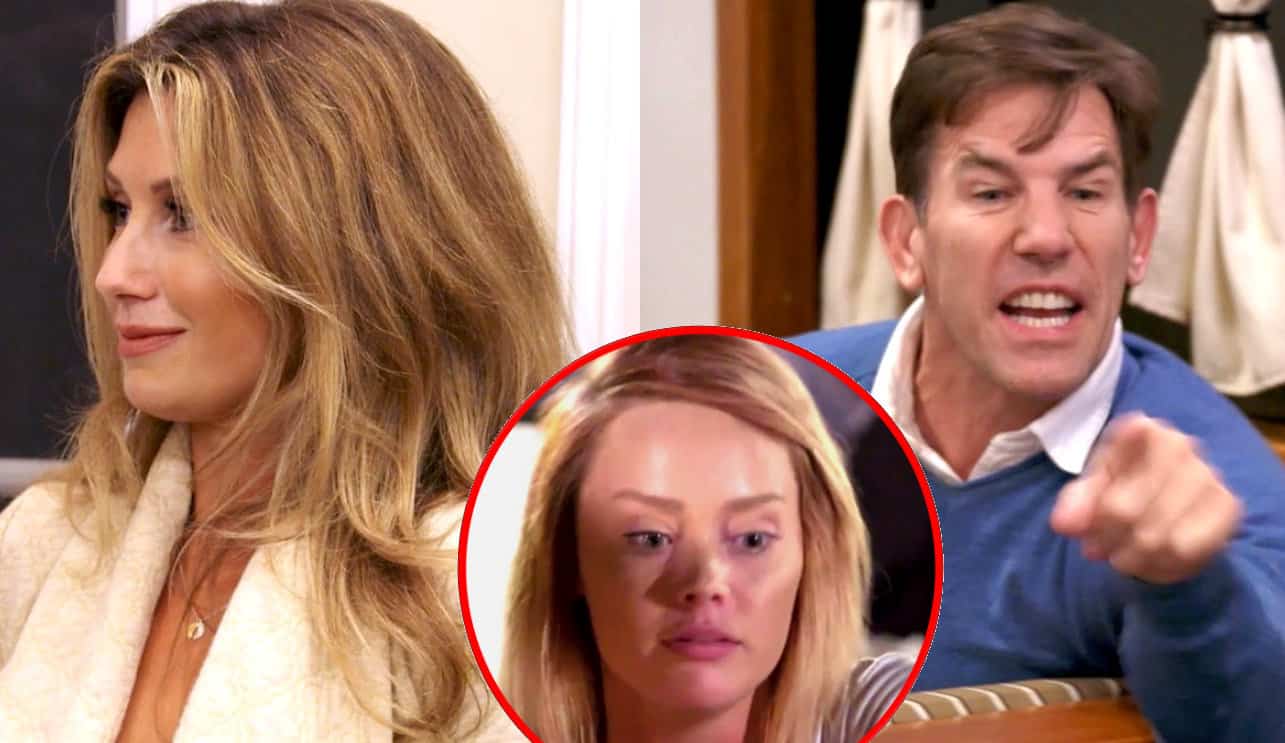 Ah yes… the “to be continued” picks up right where we left off last week. For entertainment purposes, let’s just hope that Ashley doesn’t decide to shut her mouth up on this episode of Southern Charm.

In case you forgot, dear viewer, Ashley begins word vomiting all over Kathryn, after having one too many drinks. This rage stems from the fact that Kathryn is not extending an invite to Ashley for her son’s birthday party. Ashley lays into Kathryn and the ladies (+ Whitney) sitting at the table try and stop the damage from continuing. I think it’s ridiculous that the men of this group choose to ogle the drama from a distance instead of stepping in and diffusing it. It almost appears as though they are frightened!

Ashley is just digging herself deeper and deeper into this black hole. She slams Kathryn’s motherly skills and Kathryn’s overall being. Finally, Thomas with the yellow pants, stumbles over. Instead of shutting up his new lady, Thomas says NOTHING. I’m pretty sure he’s way too wasted to even comprehend the gravity of the situation because the only thing he mutters out is, “I’m trying to be respectful towards Ashley.” Uh…Thomas. I say put down the drink, get your girl, and GTFO.

Kathryn remains relatively calm throughout this entire ordeal. Whereas Ashley (insert hair flip here) appears to be an absolute lunatic and finally storms away. I gotta give Kathryn props for the way that she handled that full-on attack. She sat there and took it. Even Chelsea, resident cool girl, gets emotional after seeing the ugly side of Ashley. The girls cannot even bring themselves to retell the trauma to Shep and Austen because it was so vile.

Meanwhile, out front of the restaurant, Ashley and Thomas slur and continue the drama. Ashley asks, “How bad of a mother must you be that the courts took your two children and took them to a convicted felon?” #nooffensethomas. Low. Blow. Thomas can barely stand up as Ashley shrieks about “kissing her a*s” and all of the “enablers.” Don’t worry, guys. Ashley states to Thomas, “I’m not leaving- literally and figuratively.” GAG.

The residual effects of this sh*ts show are still being felt by Kathryn and the rest of the gang. They cannot fathom how this escaladed so quickly and are even more surprised to see Ashley and Thomas come back to the restaurant after causing such a scene. The drunk duo have to actually hold each other up as they walk past the group and head inside to the bar because they certainly need more drinks! Ashley STILL won’t shut up about “fighting” for Thomas and even in her enraged state, she manages to get in that should Thomas propose to her tomorrow, she would say yes! This girl!!

As the crew preps to leave, Austen grabs Chelsea and fills her in on the new girlfriend situation. Because Chelsea is a friend of the new gf, Victoria, Austen felt that he had to let Chelsea know. He also finally comes clean that the reason he originally broke up with Victoria was because he still had feelings for Chelsea. Despite the messy love triangle, Chelsea and Austen hug it out, exchange I love yous, and promise to be friends forever no matter who is dating who. Weird.

Shep heads inside the bar to try and rally up Thomas and Ashley, as the boat to head back to Hilton Head will be arriving soon. Ashley lets Shep know that she is following the old adage ‘keep your friends close, but your enemies closer.’ Ashley is speaking in code that no one can quite crack and you know it’s bad when Shep says “she should know better” than to act like that.

To add insult to injury, the whole group, including the drunk duo, have to pile onto the boat back to Hilton Head. Kathryn states, “I feel like this is like the Titanic” and Chelsea makes it clear that Ashley can only stay in the house if Kathryn is okay with it. Thomas jumps up and basically snarls at Chelsea. He is absolutely wasted and tells Chelsea to “shut the f*ck up. Don’t act like you’ve got the power when you don’t got the power.” Ashley smirks through the whole thing and just repeats the word “enabler.” Austen calls Ashley trash and the two drunkards canoodle in the corner while Ashley says creepy things to Thomas like, “It’s you and me against the world baby.” Eventually, Thomas apologizes to Chelsea and thankfully, they return back to Hilton Head before anyone else can say another word.

Back at the house, it seems as though the wheels are falling off. When Danni asks Thomas if she’s an enabler, Thomas asks, “In what neighborhood?” There is ZERO point in trying to talk to this man, as he can barely stand up straight. The smartest thing Thomas said all night is that Ashley needs to go to sleep, particularly because Ashley has now caught Chelsea’s ear. Ashley continues the Kathryn bashing: “Just because you give birth to something Chelsea, doesn’t mean you’re a mother.” #accountability #responsibility. Ashley is a MESS. Meanwhile, anyone else catch Thomas choke when Kathryn said this may become a legal issue with Ashley? Hilarious.

The next morning, how cute are Austen and Craig making breakfast for everyone? You know what’s not cute? How the next morning Ashley can’t even remember what she said or did. Thomas gives Ashley the advice to “lay low” (solid idea, dude). She attempts to do just that as she rolls into breakfast with the gang. Ashley totally pretends last night didn’t even happen leaving people to ask, “Is this girl not embarrassed?” Ashley is a shameless biatch. Speaking of shameless, can we discuss how Whitney went out for his OWN breakfast. Such a diva!

The day’s plan is to go get “a big catch or haul” from the beachy activities- fishing or crabbing. I’m pretty sure everyone is just happy to get the hell away from Thomas and Ashley. While the group splits up, Whitney, Thomas, and Ashley hang back at the house, naturally. Once Ashley goes to lay down, Whitney and Thomas discuss Ashley’s behavior from the night before. Finally Thomas addresses the debauchery and applauds Kathryn for her self-control during the Ashley attack. It’s about time, Thomas.

The three musketeers, Kathryn, Craig, and Shep, prep for a fishing trip with one of Shep’s old buddy’s, Michael. Meanwhile, Chelsea also has a friend with a boat -Must be nice. The Chelsea boat holds Austen, Naomie, and Danni and they are crabbing. It’s kind of a battle to see who will haul in more for the night’s dinner. So far, team crab is winning. The fishing team has caught a shark they’ve thrown back andddd a rock. Score!

Back at the house…WHY IN THE WORLD IS ASHLEY PAINTING THOMAS’S TOE NAILS AND BRUSHING HIS HAIR ALL WHILST DISCUSSING HAVING BABIES WITH HIM?! If what Craig is saying is true about Ashley not taking birth control, Thomas should just abstain from any sexual activity with that maniac.

Later, the fish boat decides to “fake success” until they “make success” and therefore they buy their haul so they do not roll up to dinner empty handed. Buncha fakers. The crabbing crew brings in a TON of blue crab and deliver the goods to the chefs so they can whip up something good for dinner.
Once everyone’s showered and dinner begins to come out, we get a Cam baby update: the girl’s been induced, but no baby yet! I’d totally rather be with Cam at a hospital instead of watching Ashley create more and more drama. For instance, when Shep goes over to check in with Thomas and Ashley (for reasons I will never understand), Ashley begins spitting out things like, “Who’s the boss? Oh yea, he thinks he is!” about Thomas. Shep cannot take her one more minute and I kinda loved that he walked away from her. Shep explains to the rest of the girls that “She has this irrational confidence now that makes me sick to my stomach.” Shep predicts that Ashley will be out of the picture soon because TRav can’t be himself. I am still not sure if that’s a good thing or a bad thing….

As the night wears on, there is more and more food and more and more booze. Craig and his accent finger (ie: orange nail polish) picks through all of the crabs until he finds just the right one. That behavior is almost as annoying as Ashley’s, especially when she can’t find a chair during dinner. Shep makes a toast thanking everyone for coming to Hilton Head. They cheers to friends and good times and then Austen takes a call from his gf, Victoria.
Way to go, Naomie. Turns out homegirl posted a story of Chelsea and Austen snuggling on the boat ride back post crabbing. Victoria seems to be very insecure and jealous of the way Austen and Chelsea were sitting on the boat. When Austen asks if this is the way she wants the relationship to end, Victoria’s answer gets cut off with a big fat “to-be-continued…” I can hardly handle the suspense (insert eye roll here). Until next time…