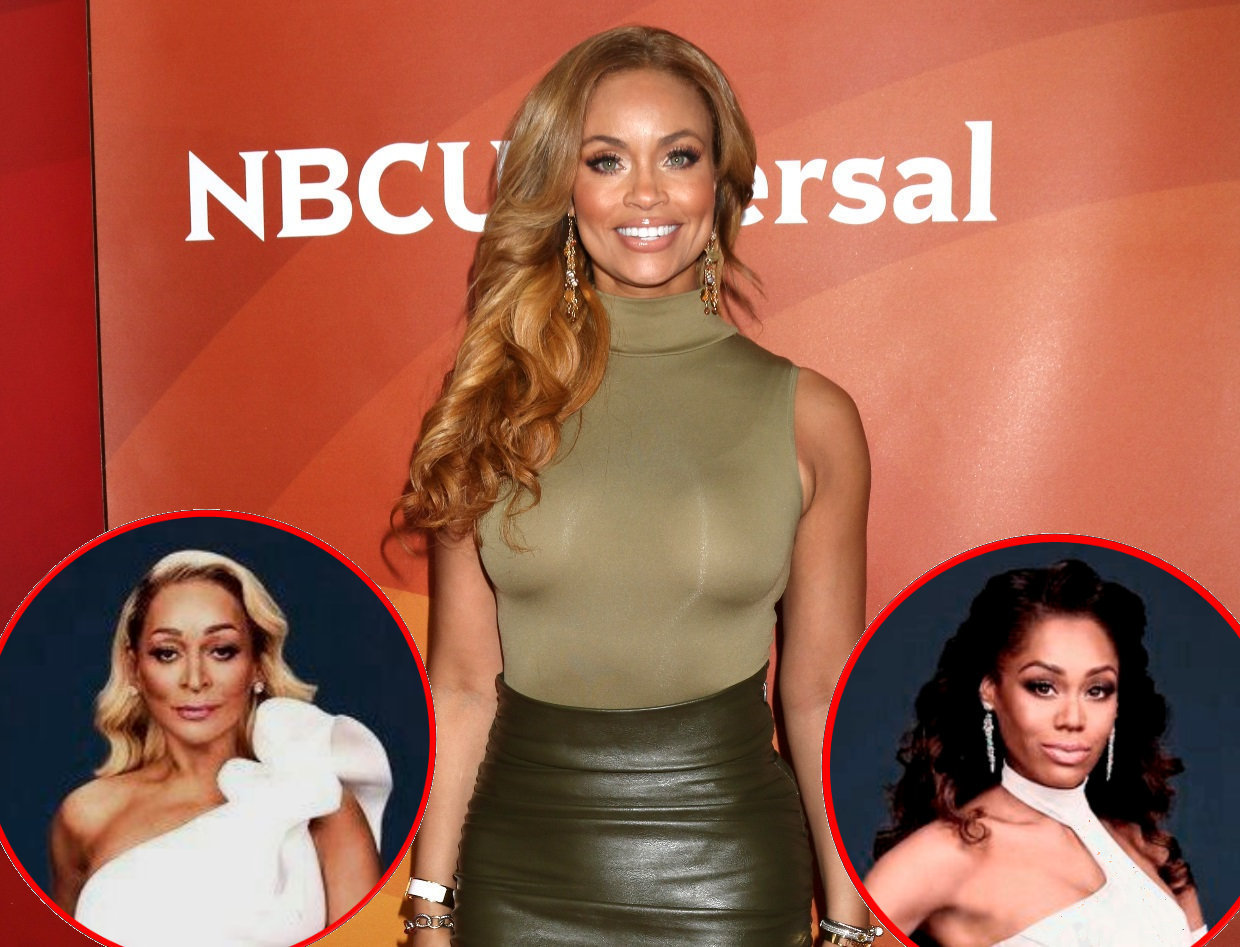 The Real Housewives of Potomac star, Gizelle Bryant, is the queen of confrontation.  If she has something to say, you’re going to hear it whether you like it or not, and sometimes, things can get a little messy!

That was certainly the case on last Sunday’s episode. It was wall to wall drama, and Gizelle was smack in the middle of all of it. She weighed in on her recent spat with costars, Monique Samuels and Karen Huger, during an interview with BravoTv.com and, as usual, the green eyed beauty held nothing back!

It all started when Gizelle,  and fellow “Green eyed bandit”, Robyn Dixon, showed up to Karen’s O Gala to deliver a “message” to The Grande Dame about her “lies.” But the message was never delivered, because as soon as the women approached her, and asked to talk, Karen had them unceremoniously kicked out by security!

“I didn’t and wasn’t going to talk to Karen in front of her guests, and mess up her event,” Gizelle explained. “This was going to be a four minute conversation…short, sweet, and to the point. If you ask me, Karen was the one that made the scene yelling, ‘SECURITY!’.”

She has a point there. I doubt any of Karen’s guests missed that diva moment, but Gizelle said she “wasn’t surprised”  because Karen “runs from any and all confrontations.” And, as far as getting kicked to the curb? Well, she’s Gizelle… she had “someplace better” to be anyway.

Now, it’s unclear where that better place was, but before she left, she made time for yet another confrontation…this time with Charrisse Jackson Jordan, who had followed Gizelle and Robyn outside.  It was a minor dustup, and Gizelle said it was barely a blip on her radar, but she couldn’t help throwing a little shade Charrisse’s way!

“Until I watched the episode, I forgot all about the confrontation with Charrisse. At that point I think she was just tired of her date following her around like a puppy dog. I mean, it’s got to be exhausting having to babysit a grown man,” she said.

Of course, Gizelle and Robyn’s ejection from the gala was the hot topic among the other ladies the following day, but Gizelle didn’t mind in the least. In fact, she said next time, she might REALLY give them something to talk about!

”I love, and live for, people’s interpretations of me. I didn’t come in with a bullhorn, I asked to speak to Karen on the side. Next time, I’ll just go directly to the microphone and state my issues in front of everyone. Carson Kressly (who emceed Karen’s gala) will ask to find a Gay Bill Gates, and I will ask to find a Grande Dame who is the spokesperson for Lies R Us,” she said.

Sounds like Karen’s been warned! And perhaps she got the message, after all, because when the next time she saw Gizelle, at the Congressional Black Cacus’s business expo, she avoided her, altogether. And perhaps it was the wise choice, but Gizelle wasn’t having it!

Gizelle’s booth featuring her cosmetics line, EveryHue, was front and center in the convention hall, and literally couldn’t be missed. But Karen, accompanied by her new BFF, Monique, certainly tried!

They were just inches from a clean getaway when Gizelle saw them skulking off. And wouldn’t you know it? She marched right over to them, and confronted them about pretending not to see her. She said was particularly confused by Monique. They had no beef that she was aware of, and she couldn’t imagine why she’d go to such lengths to avoid her.

“I haven’t used the term scaredy cat since fourth grade, but woah, Little Miss Monique Samuels, it certainly applies to YOU,” she joked. “Why would you feel the need to hide from me? Are we involved in some sort of fight, and I just wasn’t informed?”she wondered.

But Gizelle said she “loves” all the “silly little haters,” and that pure jealousy stopped them from coming over to her booth, and congratulating her on her success. Besides, she said,  if they hadn’t run off so quickly, they might have even learned a thing or two.

“Monique and Karen saw me…they said they saw me, hell, Ray Charles and Stevie Wonder saw me. It’s a sad day when your insecurities and jealousy look you in the face, and bite you on the butt. They should have walked over to my booth because I could have taught them a thing or two about being IN BUSINESS.”

Well, viewers, don’t think for a second that this drama is over. Gizelle WILL say her piece, you can count on that! And we don’t have to wait long to hear it. Previews for next week’s episode show Gizelle finally having a much needed sit down with Karen, and it looks like things may get pretty heated. Stay tuned!