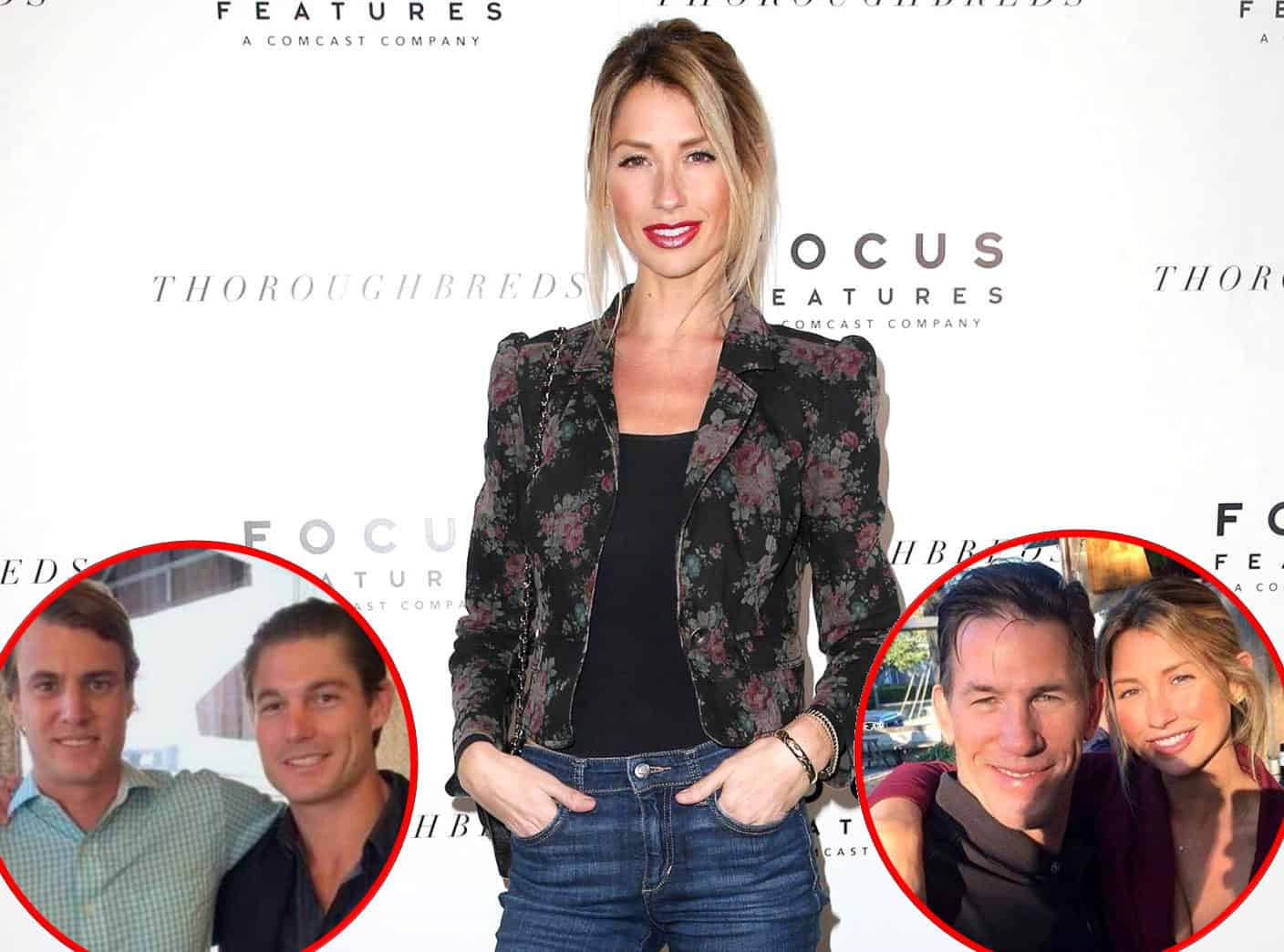 In today’s Southern Charm news, Ashley Jacobs is attempting to clarify what appears to be her flirtation with the castmates of her boyfriend Thomas Ravenel. Additionally, she is also revealing if she ever did get a job and how her relationship is with Thomas these days.

On the latest episode of the Bravo hit show, Ashley was seen sweet talking Shep Rose, when she stated: “Would you date me if I break up with Thomas?” to an uncomfortable Shep. And later on in the episode, Craig Conover was seen telling Thomas that Ashley once told him,”Craig, if only you were like a few years older, I’d be dating you instead.”  Thomas appeared to be stunned upon hearing this.

Following the episode, Ashley, 33, took to her Instagram page to defend herself, stating that what comes off as flirting is simply her attempt to be funny and to “get a reaction” out of the guys.

She wrote, “Go to Shep and Craig’s Instagram and ask them if they thought I was serious… do it.”  She later added: “Do you think I forgot their [sic] were cameras filming me? If I were serious, I certainly wouldn’t have done it on National Television. C’mon now.” 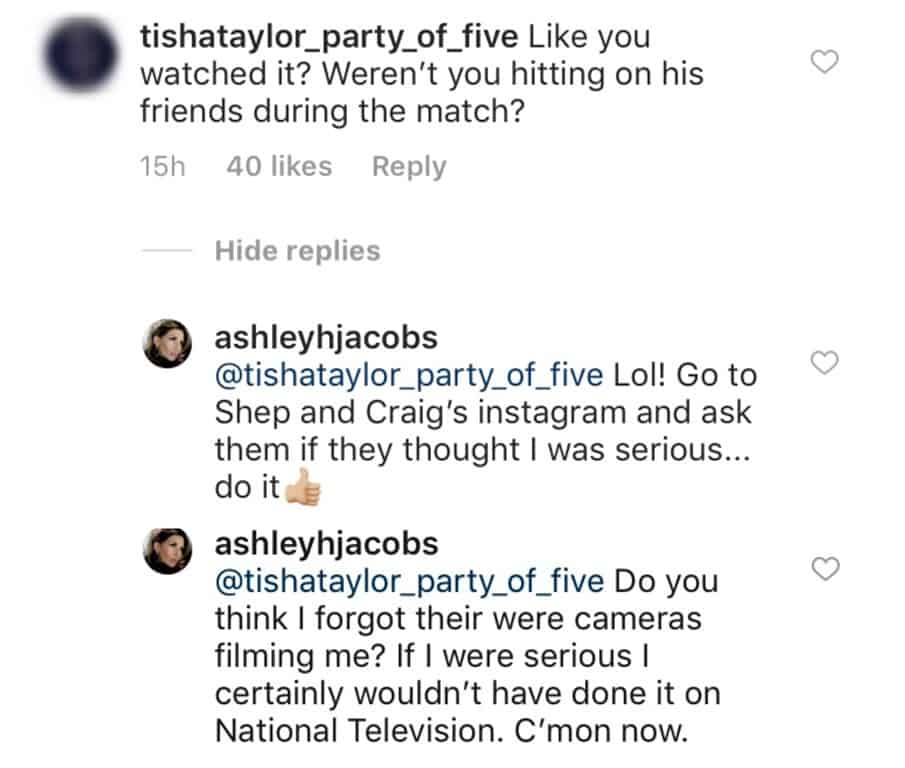 Ashley also claims the cameras did not show Thomas’s real reaction to Craig telling him about her flirtation.

“Thomas then followed up with, ‘She makes that joke with everyone!’ Why wasn’t that shown? I once made that joke to Thomas’ father in front of Thomas! It’s my go-to joke! Apparently the viewers don’t understand my send of humor. This newbie had to unfortunately learn the hard way,” wrote Ashley.

When asked if she would ever consider dating Shep or Craig, Ashley stated: “Lol! Craig is definitely a cutie! But I would NEVER date one of Thomas’ friends. It was a joke that obviously didn’t go so well.” 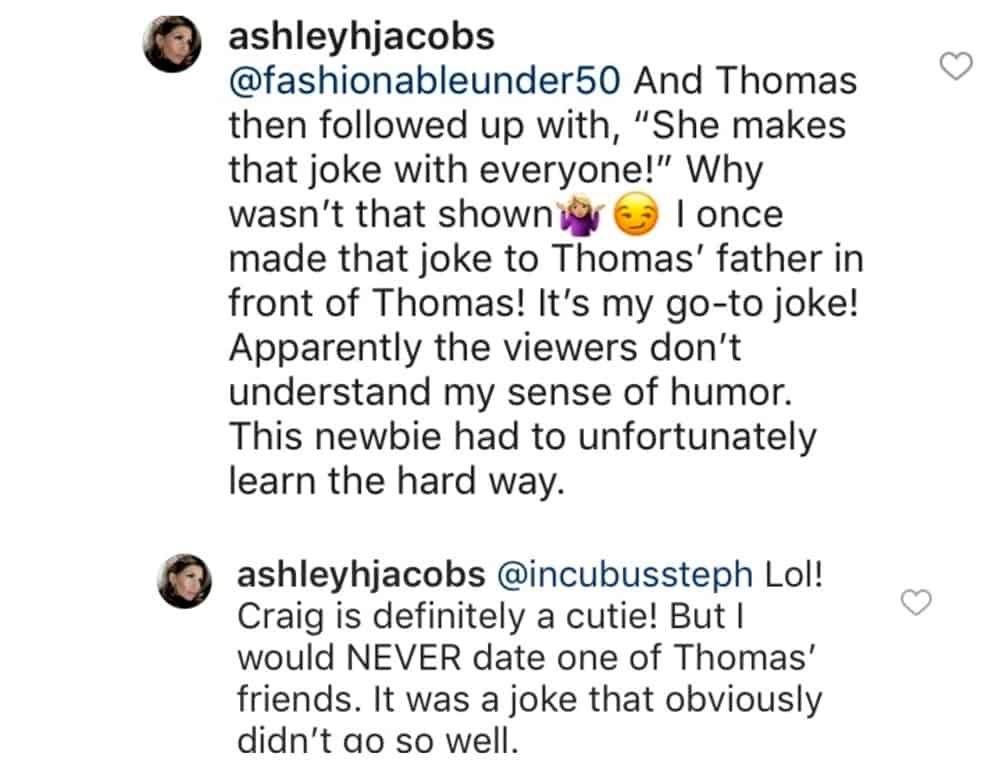 On the same episode of the show, Thomas was shown telling Ashley that she needed to get a job, citing that he was starting to feel like a “sugar daddy” due to paying all of her bills. So, is Ashley working now? According to her, that answer is yes.

Ashley states she’s been working since March of this year, explaining she had to wait to get her South Carolina nursing license. 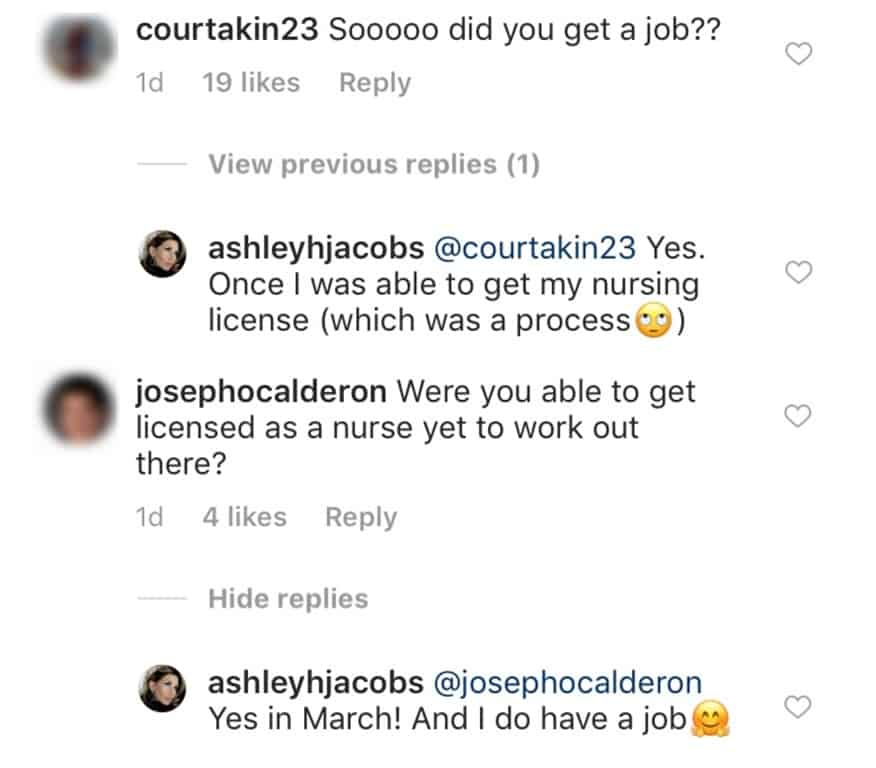 “Yes. Once I was able to get my nursing license (which was a process),” she posted when asked if she had a job. And below is a photo of Ashley in her work attire from this past May.

Finally, Ashley also revealed that things are much better today when it comes to her relationship with Thomas, as the relationship appeared to be going through a very rough patch on recent episodes of Southern Charm.

“Yes, it was rough SEVEN months ago,” wrote Ashley, before going on to reassure her curious followers that she and Thomas are still going strong.