The Real Housewives of Potomac Recap: Mime Your Own Business 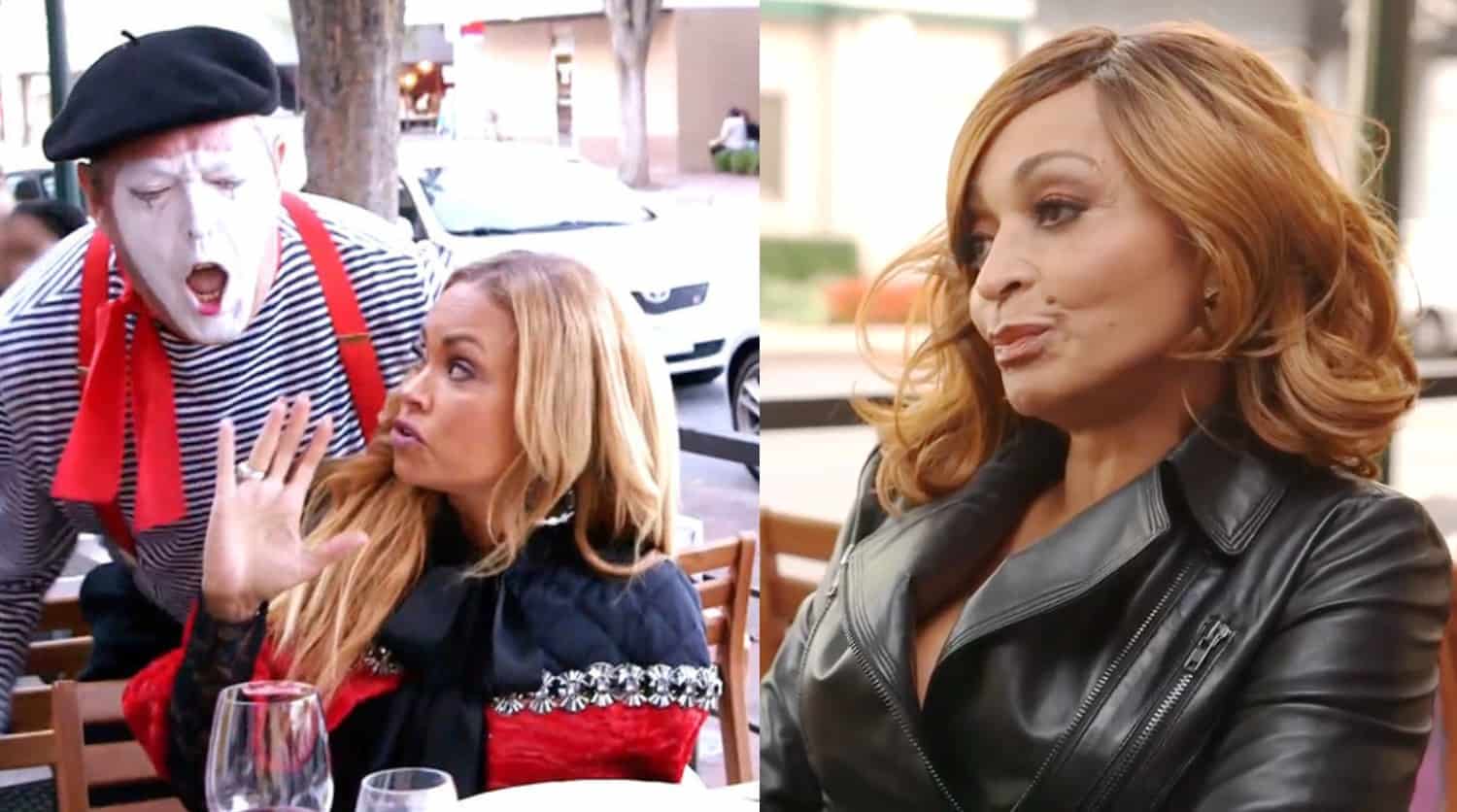 Well, the ladies of The Real Housewives of Potomac returned last night, after a week off, and they picked up right where they left off…with plenty of bickering and shade to go around!

For starters, Karen is still hanging out with Gizelle’s ex boyfriend, Sherman’s ex wife, Kyndall, and at this point, she’s not the least bit concerned about what Gizelle thinks of it. Karen has  known Kyndall for years, and explained that although she took “a pause” from their friendship  after Gizelle started dating Sherman, she no longer feels that Gizelle “deserves” such loyalties.

Kyndall has actually known most of the women, including Gizelle, for quite some time, and has recently been invited back into the fold. She even attended both Karen’s and Monique’s events recently, which annoyed Gizelle to no end. But, of course, that was the goal all along, so, I suppose one could say that it all worked out.

Last night, Karen extended another invitation to Kyndall…this time for pedicures with her and newbie, Candiace, who looked a little nervous about the idea of fraternizing with the “enemy”, and when talk turned to Gizelle, she wisely remained mum.

But Karen held nothing back! She talked about Gizelle’s habit of “scr**ing people in the butt with no Vaseline,” and not surprisingly, Kyndall agreed, and said Gizelle was “just a b***h,” and that Karen deserved better.

At that point, a very anxious Candiace changed the subject, and began telling the women about the recent spat she had with her fiancé, Chris, during which he’d called her a “spoiled princess,” and let’s face it he wasn’t wrong. But apparently, being called out for her bratty behavior doesn’t sit well with Candice, and she’d taken off her engagement ring, and made a disparaging comment to Chris, wherein she compared him to his “deadbeat” father.

And evidently, Kyndall was feeling quite comfortable at this point, because she didn’t hesitate to put in two cents. She told Candiace that Chris was right..she WAS a princess, and Karen chimed in to let her know that her reaction had been way over the top, and that if she was in Chris’ shoes, she’d have left Candiace, and advised her to be more mature and careful with her words in the future.

It was sound advice, and Candiace actually seemed to take it to heart. She managed to keep her cool and even refrained from throwing a tantrum when she and Chris spoke to a lawyer regarding a prenup, although she did mention that if Chris ever “found himself a concubine,” she’d “snatch him up and murder him,” she clarified that she meant it “in the best possible way.”

Elsewhere, Monique was discussing plans for her upcoming 34th birthday, over dinner with her husband, Chris, and was thrilled when he offered to stay home with their two children,  while she and the other ladies took a girls trip anywhere she liked.

Monique quickly settled on a trip to France, and decided that she would invite all of the other ladies, including Robyn and Gizelle. She said she wanted to show them how “mature” she could be, and hoped that the trip would give them the opportunity for a new start.

Of course, a birthday celebration of this magnitude needs an equally special invitation, and Monique pulled out all the stops. She had a mime hand deliver the invitations to each of the ladies, but they were a little confused at first.

Robyn was the first victim..I mean invitee..and while her sons seemed to enjoy having a mime knock on the door on an otherwise routine morning, Robyn wasn’t sure what make of it. When she realized it was an invitation to go to France with Monique, she was even more confused.

The two women had barely spoken since Monique threatened to “choke Robyn out” with her umbrella, after Robyn brought up her drinking, and Robyn was shocked that Monique seemed to have forgotten all about that small detail, and had the audacity to invite her on a trip abroad, as though they were perfectly cool.

Gizelle and Karen got their visit from the mime while they were lunching al fresco at a local eatery. They’d agreed to meet face to face to talk  over their issues, and both initially mistook the mime for a vagrant, and told him to go away.

In their defense, they were pretty preoccupied with their own drama in the moment, and besides, who expects a mime to come casually walking over to their table?!

Gizelle was trying to confront Karen about “lying” to Robyn. To refresh your memory, Robyn invited her to her She Is Empowered workshop, and insists that Karen accepted, but Karen disagrees. According to Karen, she’d replied “yay,” not yes, and really can’t understand why Robyn and Gizelle are so worked up about it, and for the record, neither do I. What are they, 12 years old?!

After going round and round about it, and not appreciating Robyn’s tone, Karen had ultimately chosen to attend a charity event that Monique had invited her to, instead, which only fueled Robyn’s fire. But when Gizelle  tried to broach the subject with Karen during lunch, she wasn’t having it. She said that she’d discuss her issues with Robyn, WITH Robyn.

Karen said that she’d much rather discuss Gizelle’s recent “whack attacks,” from that shady, homemade T-shirt she’d worn to Karen’s “press conference with no press,” to showing up to Karen’s charity event, with Robyn in tow, dressed in jeans and a “used Liberace jacket,” and yelling at her in front of her guests  about not showing up to Robyn’s workshop.

Gizelle insisted that she and Robyn didn’t yell at Karen, and that her  jacket was, in fact, fabulous. And then she got down to the real issue: Karen hanging out with “the thirsty girl,” namely Kyndall.

Karen chuckled, and said Gizelle was simply “insecure,” and had no business dating Sherman to begin with, especially since she’d once been friends with Kyndall, and hadn’t even told her that she was dating her ex husband.

Gizelle immediately dismissed Karen, and said that she had nothing to be insecure about, since Kyndall and Sherman had been divorced for “100 years” (it’s more like 6 years, but who’s counting?), and that she was likely to date many other men who had been married before.

Karen said that she didn’t doubt that, and told Gizelle that she needed to “do better” by her friends because she’s a “hot mess.” I’m sure Gizelle had a snappy comeback all ready to go, but at that moment,  the mime returned, and sat down at the table, so Karen, secure in the knowledge that she’d gotten the last word, stood up, and left Gizelle to deal with him by herself.

Meanwhile, Charrisse finally met up with Monique, after weeks of ignoring her calls, to confront her about the “shift” she felt Monique had taken recently. In Charrisse’s opinion, Monique has become a bit of a social climber, and has been using Charrisse’s many connections to get to the top of the ladder.

She recalled the hurricane relief event they’d organized together, and said that she’d felt Monique had made the whole event about herself and spent the whole time trying to network with Charrisse’s friends.

Monique immediately began crying, and said she “felt so hurt” that Charrisse saw things that way because out of all the women, Charrisse was “the only one she cared about.” Charrisse became emotional, as well, and told Monique that everything would be fine between them.

When the women began talking about the trip to France, Charrisse advised Monique to let Robyn and Gizelle know that she really did want to get to a better place with them during the trip, but as luck (and the magic of reality tv) would have it, Gizelle texted at that very moment, and declined the invitation.

Gizelle explained that she was “shocked” that Monique would invite her, since the last time they’d seen each other…at the Congressional Black Caucus business expo…Monique had gone out of her way to ignore her. She closed the text by saying that the sentiment went for Robyn, as well. Of course, that went without saying.  Robyn can barely cross the street without Gizelle, let alone an ocean.

The episode came to a close, with everyone attending the open mic night at Ashley and her husband, Michael’s restaurant, Oz. Karen and Gizelle were surprisingly chummy, and greeted each other with the requisite double air kisses, but Robyn held back, mumbling a half hearted “hello,” and excusing herself when the photographer asked them to pose for a picture together.

Once they were seated, Karen asked Robyn if she wanted to talk, and Robyn launched into her whole spiel about Karen “lying” about accepting her invitation. She’s apparently NEVER going to let this go. It’s been weeks, already!

Karen began to defend herself, and it started to get a little heated, so Ashley asked them to calm down, and try to enjoy the performances..if you could call them that. Karen finally tried to take the high road and apologize, but Robyn wasn’t receptive, AT ALL!

When Monique arrived, along with Charrisse, she immediately asked Gizelle to step away for a private chat. Once they were alone, Monique explained that she’d only ignored Gizelle at the expo because she wanted to “avoid drama”, particularly since it was a business event, and Gizelle hadn’t invited her anyway.

Gizelle said that Monique’s explanation sounded like that of a “little girl,” and that if she was any kind of friend, she’d have simply said hello, since she was there and saw her, and since she couldn’t even do that, her answer was still “no, thank you.”

Monique said “fine, don’t come,” but before Gizelle could walk away, she made one final plea. She said that she was hoping a change of scenery would help them get back on track, and pointed out how well they’d all gotten along when they vacationed in Bermuda last season.

And it must have tugged at Gizelle’s heart strings..sort of, because she grudgingly agreed to go, but made it clear that she’d only be going to hang out with Robyn and the others. Realizing that was as good as it was going to get, Monique wisely quit while she was ahead, and went back to the table just in time for Ashley’s perfomance.

Ashley performed a song, written by her brother, Zachary, and dedicated it to Michael in an effort to convince him that they should start a family. Whether, or not, the song worked is unclear, but they looked happy. And Ashley’s voice actually isn’t half bad, although I must agree with Candiace. She should definitely keep her job!

After the song, Monique went about trying to convince Robyn to come on the trip, and after patiently hearing her out, she accepted the invitation, as well. But only after clearing it with Gizelle, of course.

Gizelle assured her that they would “do their own thing” during the trip, and the “Green Eyed Bandits” sealed the deal with a high five. And so it was decreed..the ladies of Potomac are taking their act across the pond, and from the looks of the previews, France may never be the same! Stay tuned…