90 Day Fiance Happily Ever After Recap: Pedro and Chantel’s Family Get Into a Fist Fight! 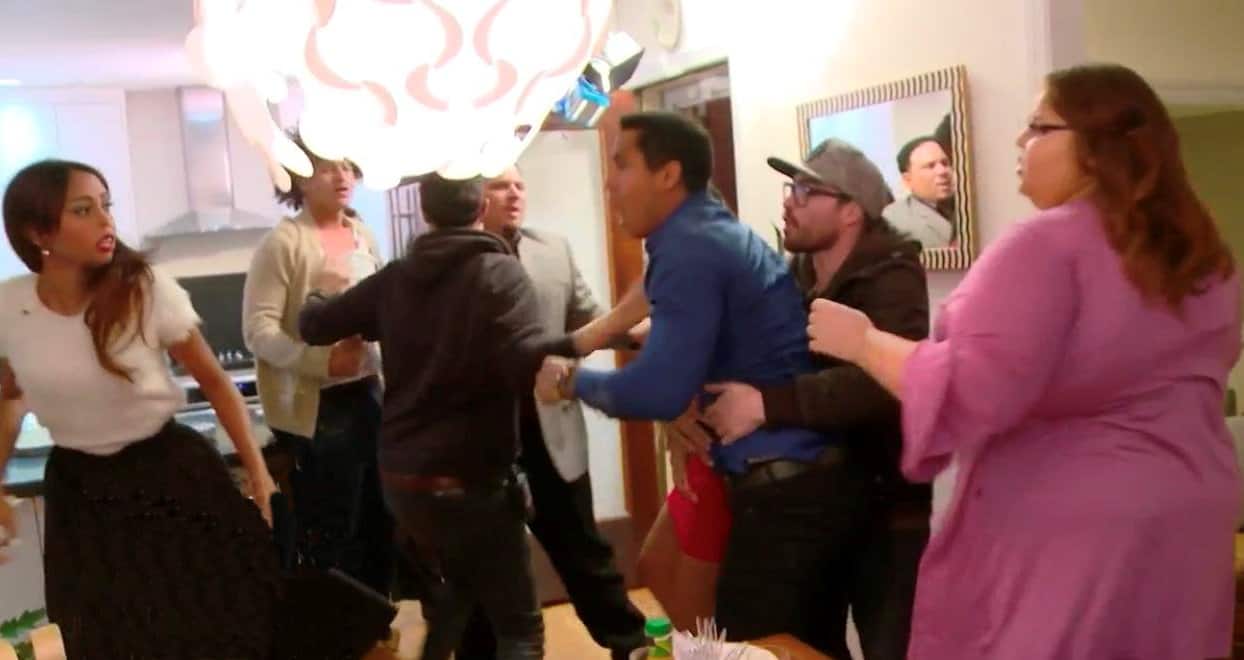 Just when you thought things couldn’t get “a little more stupider” on this show, this cast takes it to a whole other level on this episode of 90 Day Fiance: Happily Ever After? 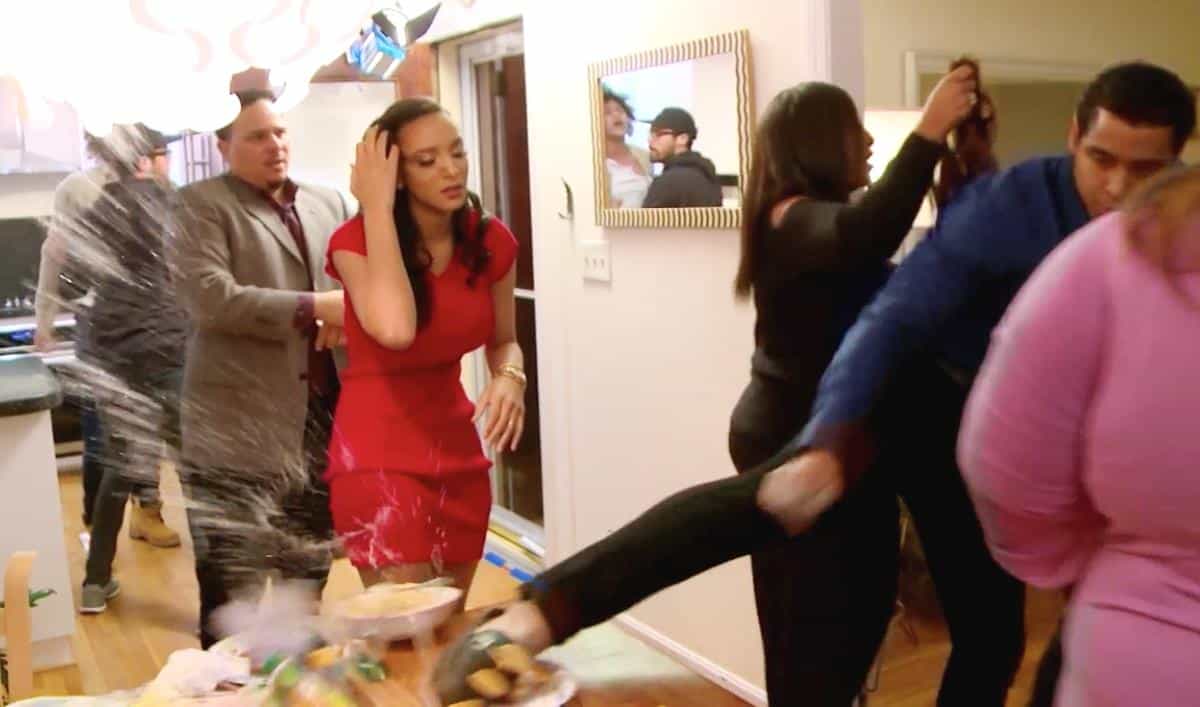 Apparently, ‘Family Chantel‘ thought it would be a stellar idea to invite Pedro and his sister, Nicole, for dinner. Chantel is a little nervous about this dinner party, particularly because the mom Chantel removed her rings and was ready to straight up brawl the last time she found out the things Pedro and his sister were saying about Chantel. I’m loving the family Chantel’s dinner attire- it’s as if they are attending some snazzy restaurant…in their own house. Once Pedro arrives with his sister (late), the epic dinner begins. Pedro’s sister thanks the family Chantel, but Chantel claims that Nicole is being fake.

The tension builds once Chantel’s mother begins asking Nicole questions. Now everyone is uncomfortable (way to go, mom) and Chantel is being called a liar by Pedro’s sister. Chantel’s mom is stirring the pot hard while Pedro and Nicole tag team. The next thing I know, there’s finger pointing, yelling, and then BOOM. Pedro is across the table lunging at River, Chantel’s brother. Well, that escalated quickly. Once the producers get involved, I know that this fight is real. We got a weave ripped out, a table overturned, and a sobbing Chantel. Pedro gets escorted out, but not before he karate kicked the table full of food like a boss. Way to get the family closer….things TOTALLY got a little “more stupider.” 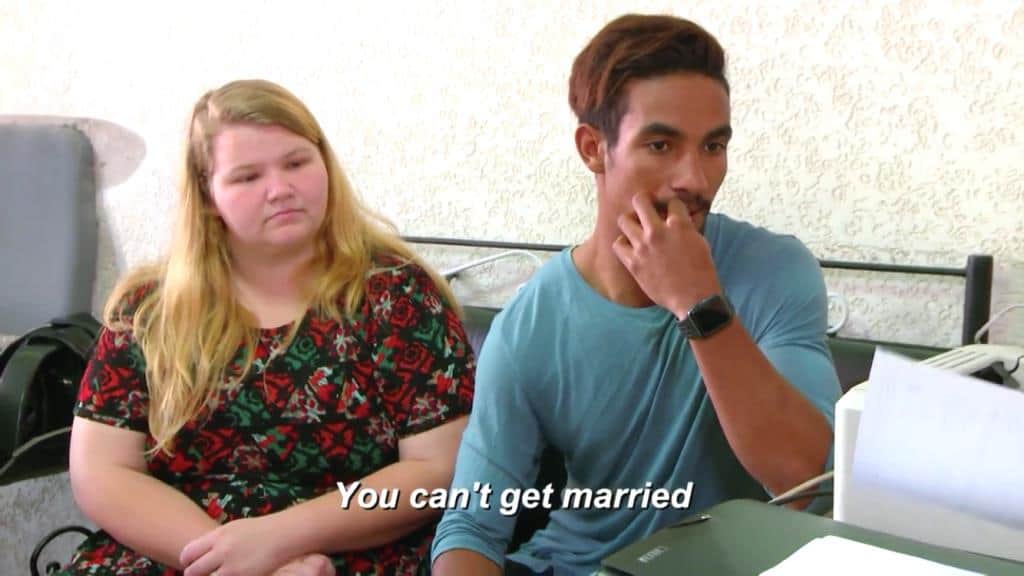 Over in Morocco, Nicole’s still unnerved having her mother, Robbalee, meet Azan for the first time. She is crossing her fingers that Robbalee will be less suspicious about Azan’s motives once she meets Azan’s family. Robbalee explains that she is “skeptic her bullcrap meter is gonna go off.” The truth is, Azan’s family is super sweet, so I feel like Robbalee is going to fall in love with them.

The warm embrace Azan’s mom gives Robbalee is heartwarming and the whole crew sits around and sips on some Moroccan tea. May tries to drag Robbalee away (I think she’s basically like, come on grandma, let’s GTFO), but Robbalee stays rooted to the sofa where some super awkward conversation takes place. In the end, Azan’s mom makes it clear that Nicole and May are loved and welcome. That makes Robbalee feel slightly more comfortable with the situation, but promises she has more questions for Azan later.

The wedding countdown is on, ya’ll! With only ten days until the big day, Azan and Nicole go to file all of the appropriate marriage paperwork in Morocco. Minor setback: Nicole needs her ORIGINAL verified police record and her photo copied version just won’t cut it. The date of the wedding needs to be changed, despite all of the wedding guests who have made plans. Seems like the universe is intervening here and saying, “NO! DON’T MARRY EACH OTHER!” 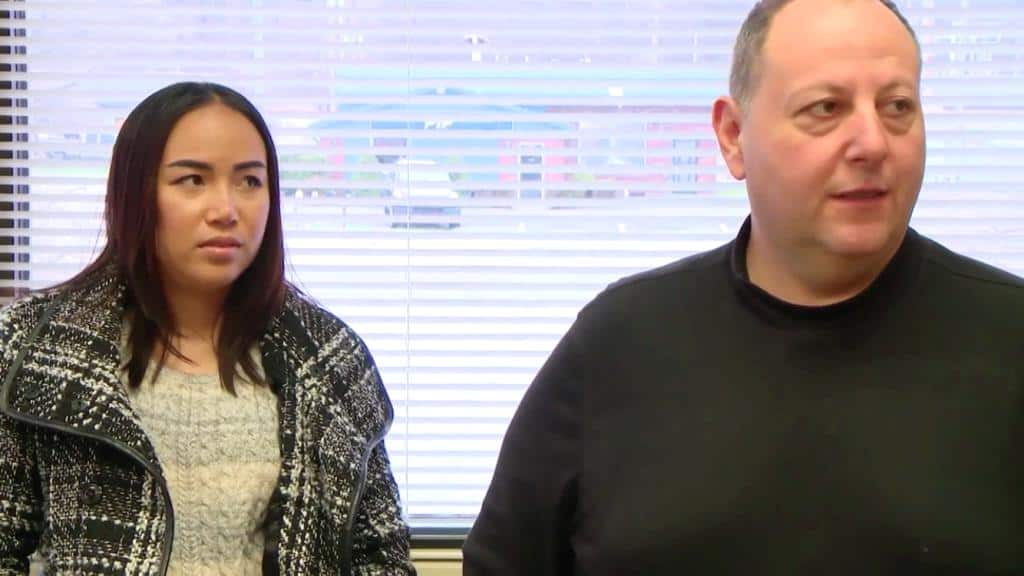 So it appears as though Chris, David’s “best friend,” needs to have a “talk” with David…probably cuz the rent is overdue. Turns out that Chris sold the firehouse…the place where Annie and David have been living their American dream. Chris, ever the gentleman, offers David “an apartment in a storage facility” without a kitchen because it would be a roof over their heads. But hey! All of the news is not all THAT bad. I mean, David was even offered a job at the storage unit where he can live. It’s a win/win, no?

Annie is beyond displeased and you can just see it in her eyes that she is like “whyyyy in the world did I marry this guy and give up my life to live at a storage unit facility?” David claims he hasn’t let Annie down yet, but Annie thinks otherwise. Everything David says is clearly a lie, but at least the guy may be employed. #glasshalffull

David and Annie head out to the storage facility and Annie believes that “everything is going to hell.” She isn’t all that off base. David gets the run-down on the storage unit job from Cody, the 16 year old in charge, but he claims that he doesn’t wanna work there because he has a masters degree. If that’s the case, David, then GET A JOB. It seems like David has hit a new low. This “apartment” is a lame excuse for a living situation and it’s very clear that David knows he is in hot water with Annie. Annie states, “I should not come here” and tells David that she wouldn’t marry him if she knew that this would be her life in America. 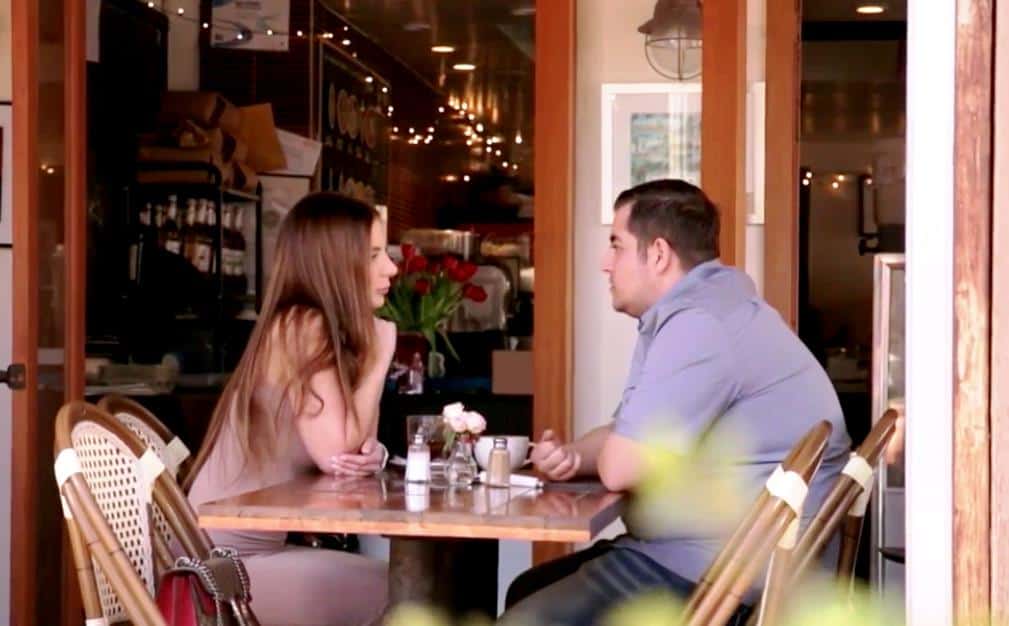 Operation “find-out-if-Jorge-has-a-kid-with-another-woman” is in full swing. Anfisa is ready to find out the truth about Jorge’s past, but she shouldn’t hold her breath that he will speak facts. When faced with the #babydaddy issue, Jorge, ever the deflector, states “if it’s not one thing, it’s another thing.” Jorge explains he dated this chick in high school and a few months after they broke up, the girl claimed she was pregnant…but not with Jorge’s child. Jorge tries to make Anfisa believe that the ex is just jealous of the phenomenal relationship Jorge and Anfisa have. Yea. Right. Keep dreaming, Jorge.

Jorge agrees to sit down with Anfisa and his ex to “prove the facts.” I am looking forward to this meet up SO much. I hope Anfisa packs a paternity test in her Louis Vuitton and whips it out like HEYO. 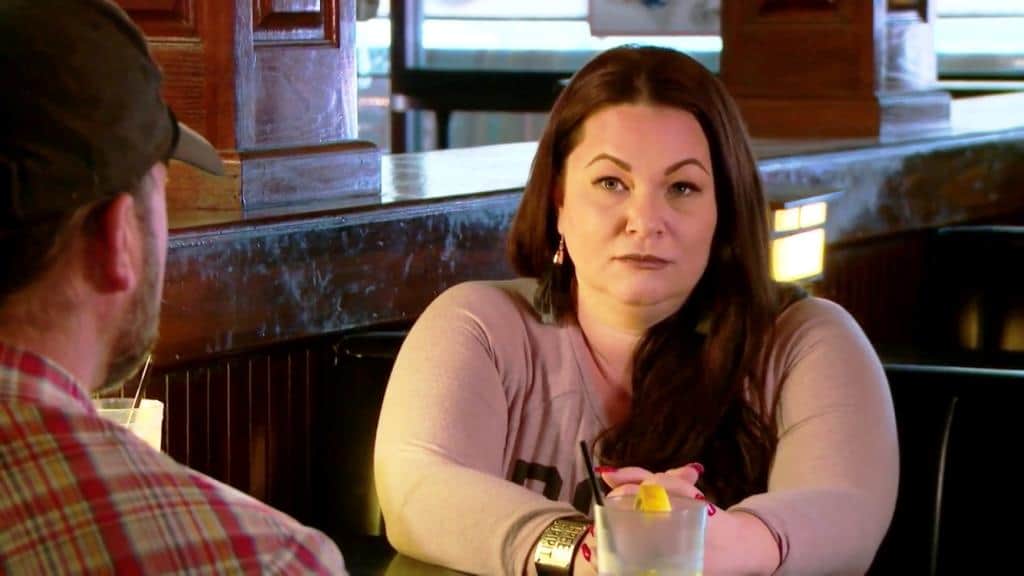 “I still have a great deal of intensity welling up inside of my system.” Yea, Molly. You messed up. On top of the fact that your family is over your antics, you’re broke, and you gotta keep it moving. Molly decides to meet up with her brother, Jess, you remember the guy at Luis’s bachelor party not too long ago. Jess claims he is “p*ssed off” about Luis, but I think deep down, he is sad that he no longer has his party animal brother-in-law.

Molly lets Jess know that she is still responsible for Luis financially, even IF they got divorced, but fills him in on her plan to attend the green card hearing. Molly further explains that Luis’s data usage on his phone was super high and that she found numerous pictures and communication with other women. Jess makes it clear that Luis needs to go back home and Molly has her work cut out for her to prove that Luis’s intentions were not good entering the marriage. 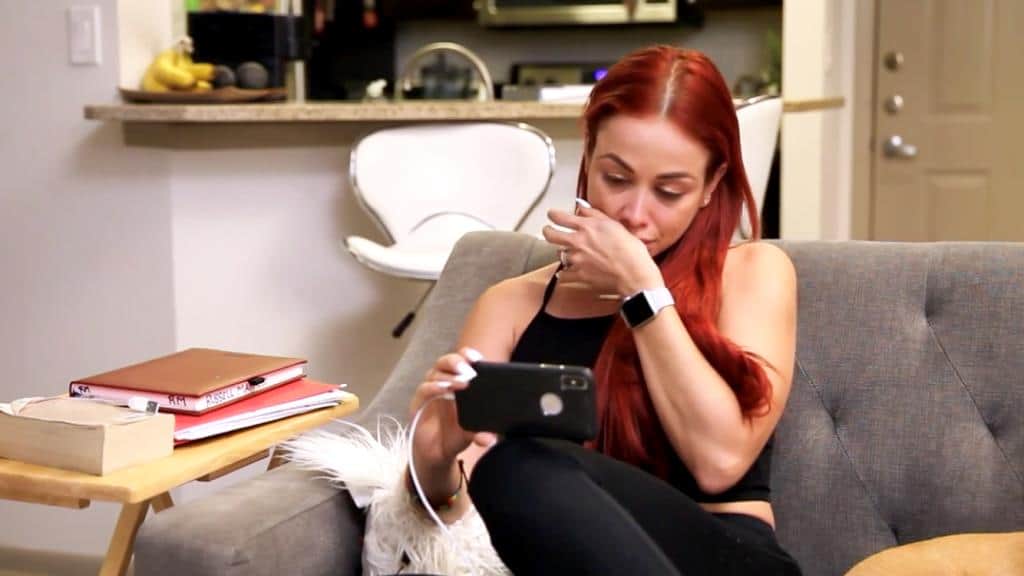 Pao has just received some sad news: her grandmother has passed away. She is very upset because she cannot go home for the funeral. She just got back from Colombia and claims that she has spent too much money on that last trip. Pao FaceTimes with her mom and lets her know that she is always there for her, despite being far away.

TELL US – THOUGHTS ON THE 90 DAYS FIANCE EPISODE? WHO DO YOU BLAME FOR THE FIGHT? TEAM PEDRO OR TEAM RIVER?