Home Real Housewives of New York City News RHONY’s Bethenny Frankel Caught in a Lie? Brian aka ‘Red Scarf Guy’ Releases Text Messages to Show She Wasn’t Truthful About Trying to Set Him Up With Carole

RHONY’s Bethenny Frankel Caught in a Lie? Brian aka ‘Red Scarf Guy’ Releases Text Messages to Show She Wasn’t Truthful About Trying to Set Him Up With Carole 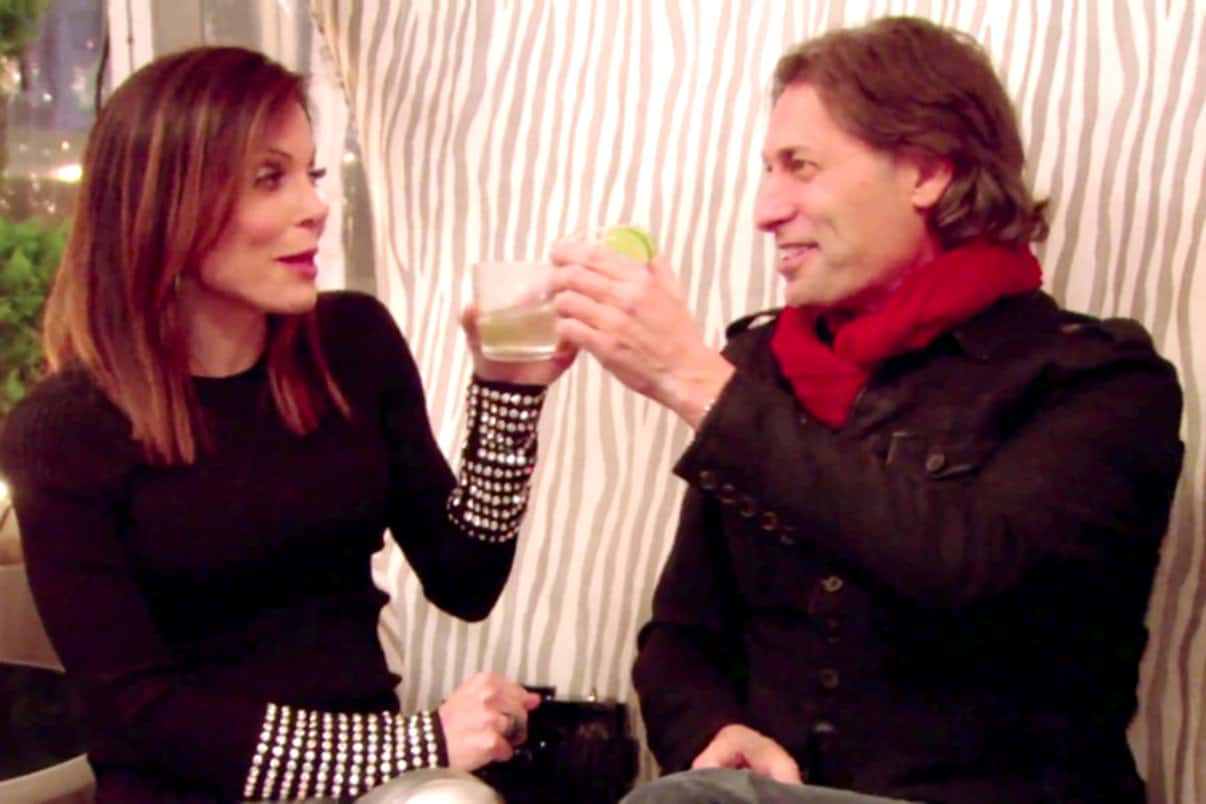 On recent episodes of the Real Housewives of New York City, a speed dating event became a major story-line on the show, all thanks to Brian Krauss aka the ‘Red Scarf Guy.’

Bethenny Frankel appeared to make a connection with Brian, but later claimed she had no romantic interest in him despite his relentless attempts to date her. And right after Bravo aired that speed dating episode, Bethenny wrote a blog in which she claimed she tried to set up her co-star Carole Radziwill with Brian the very same night of the speed dating event.

However, Brian just gave an interview in which he reveals that was an absolute lie by Bethenny, and that she was actually very interested in pursing something with him… until he showed interest in Carole. Even more, the 53-yr-old lawyer and entrepreneur released the text messages he exchanged with Bethenny, and it definitely appears to back up his version of the story.

First, below is a screenshot from Bethenny’s Bravo blog, published on July 11. She wrote, “It was so funny running into Brian, AKA “red scarf.” From what little I know, I thought he was a super nice guy who I texted later that PM to set up with Carole.”

In an interview with the Shira’s Got The Scoop blog, Brian first makes it clear that Bethenny, while reading out his text messages on the show, conveniently forgot to include the messages she was sending to him as well.

“Bethenny has an odd habit of making up stories where she looks good at the expense of others. This tale is no exception,” said Brian. “I bet those texts she was reading gave you the impression they were all from me after we re-connected at speed dating. False. They weren’t. They were cobbled together from months earlier when she first swiped right on The League, a dating app, to match with me. She conveniently left out all her replies.”

Brian then revealed that Bethenny’s claims that she tried to set him up with Carole the same night of the speed dating event is simply not true. According to him, she was actually very interested and tried to set up a date with him after the event. He says she only lost interest once he showed interest in Carole.

Brian stated, “Her claim that she texted me that same night to fix me up with Carole: also false. In real life Rori arranged a dinner the next evening. Also, in real life Bethenny texted me immediately after she left speed dating to say what a great time she had had. Then she woke up at 6:01 the next morning (Feb. 1st) to set up a date for herself.”

To prove his side, Brian released the text messages he exchanged with Bethenny.

“Here are screenshots of the actual texts between us. It’s kind of brilliant how this became “he won’t stop texting me.” You decide. I’m blue. Bethenny is grey. By the way, I’m out of the reality show business. It’s insane!” he wrote.  Those messages are below. 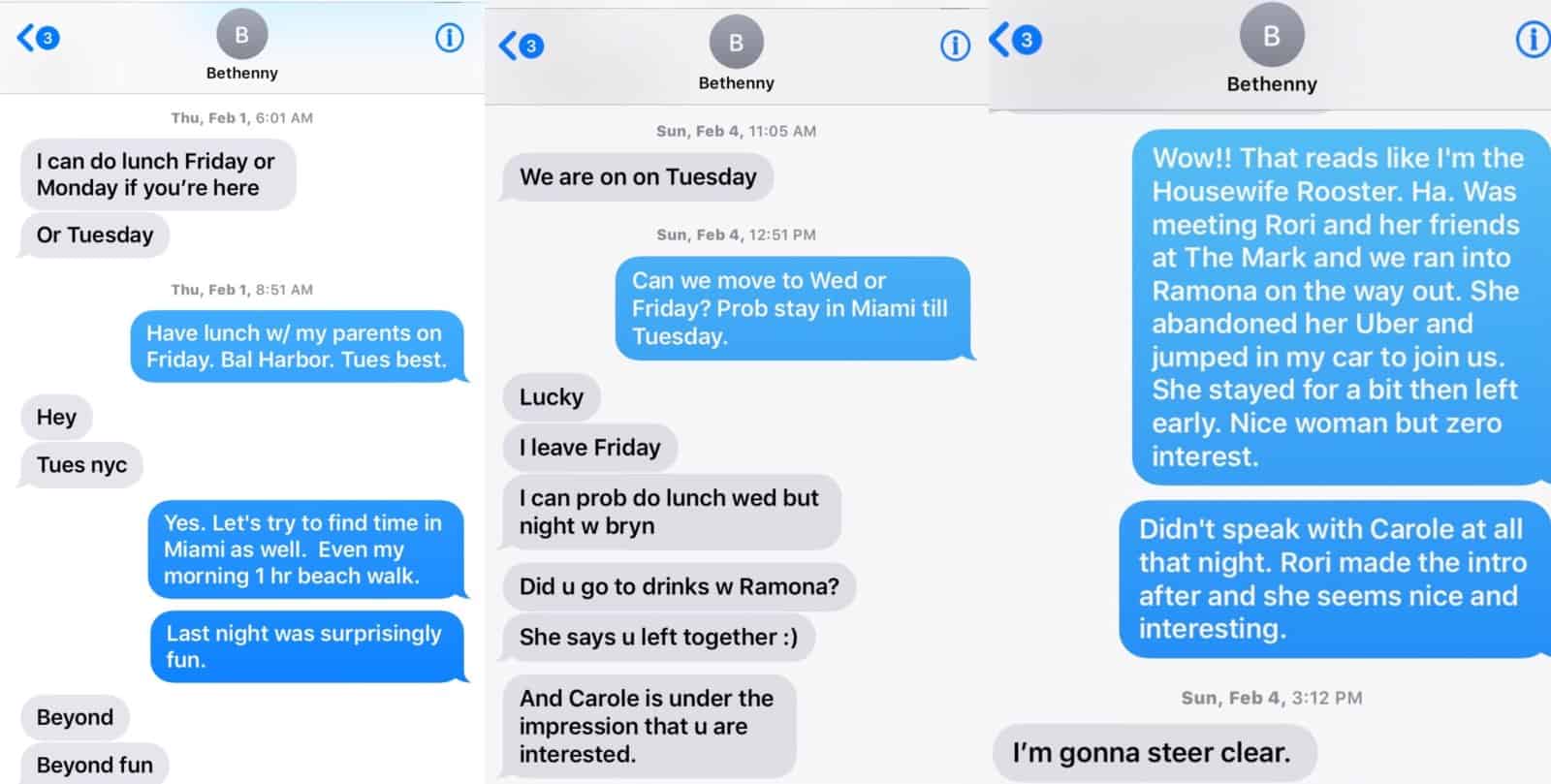 Brain said he hopes Carole will be able to set the record straight at the reunion. As for why he filmed for the show, he says he simply did it to help promote his friend’s matchmaking business.

When asked where he stands today with Carole, Brian played coy stating he ‘finds her fascinating, brilliant and accomplished and is still getting to know her.’

As for Bethenny, he says they no longer keep in touch.

TELL US – DOES THIS PROVE BETHENNY LIED?