The Real Housewives of Orange County Recap: One Apology, Another Betrayal 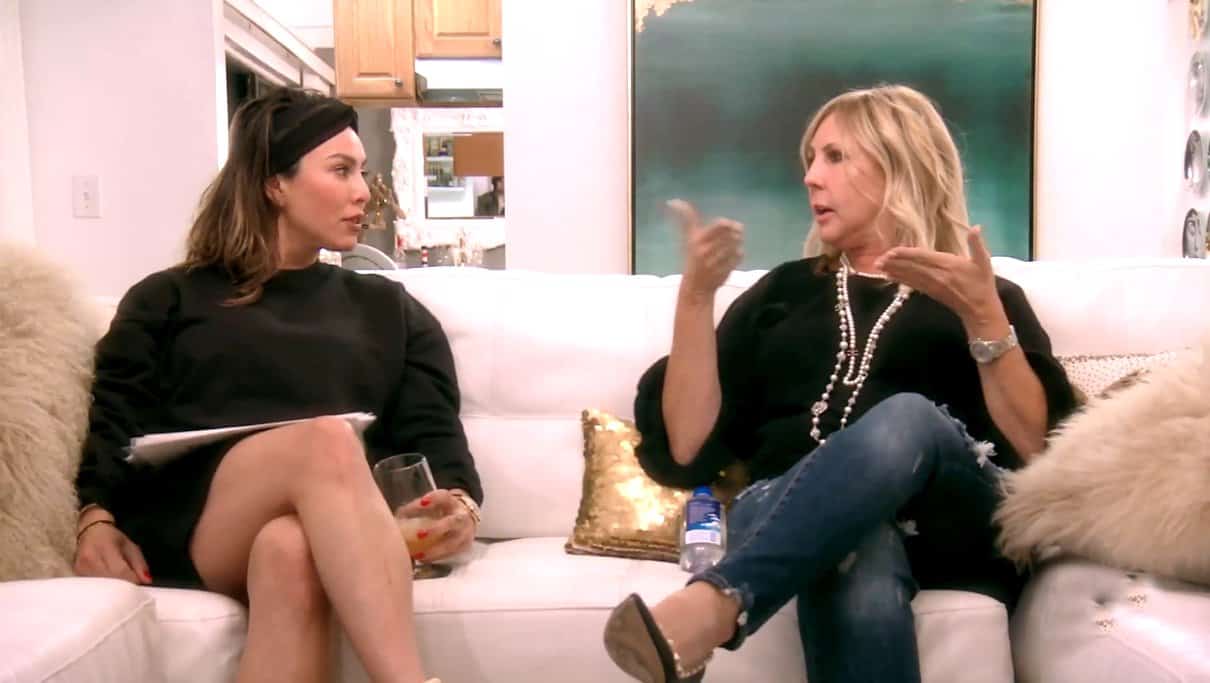 Anyone else crossing their fingers that the Pleasantville we got introduced to last episode gets left behind and we get to see some real drama this time around? Let’s hope that Vicki’s “fun bus” collides with Kelly’s “animal control” van and wam-o, we are back to the good old days of fighting and drama on this episode of the Real Housewives of Orange County.

Over at Eddie and Tamra’s house, the couple is still in the midst of the big move. Turns out that Eddie’s surgery didn’t work; therefore, the poor guy’s still gotta take it easy, despite the fact that every bone in his body is begging him to get up and exercise. When the doorbell rings, it’s a food delivery. Vicki sent over a casserole, I mean some food, to their house. I’m pretty sure it’s laced with poison and Eddie legit read my mind…he refuses to eat the food. “I’d rather eat Bronx’s dog sh*t than eat that.” Eddie for the win! Tamra reminds us all that Vicki is desperately trying to repair their friendship and she will take all of the kissing up while Vicki still shells it out.

“David’s sending us to Punta Mita so he can go to Park City with somebody else.” Man, Shannon, what the hell kind of divorce is this?! Shan acts scared to take her three girls away as a single parent, but nonetheless jumps at the free trip! Despite all of the “pain” Shannon feels, she is STILL going.

Meanwhile, we get subjected to the most awkward meeting ever at the nail salon: in walks Kelly and nods her heads in Tamra’s direction stating, “Is this your friend?” Uh, hi. Nice to meet you, too. In true Kelly fashion, she dives right in and tries to learn more about Emily. Emily gives Kelly the run-down on her relationship with her husband- he was her boss, he asked her to marry him via Google chat, and then 9 years later, there they are. Emily further states, “Mormon men make excellent husbands.” And we begin to find out even more shocking information about the new girl. We learn that after failed attempts to have children, Emily’s sister Sara carried and delivered all three of her children. Wow. That’s super incredible. My sister still won’t let me borrow her shirt and we are grown women!

Whilst at the car wash, Shannon FaceTimes Tamra to show off her Mexican vaca. Shannon invites Tamra to join in on the fun in Mexico for a quick little girls’ trip. Must be fun to “woop it up” on your ex-husband’s dime. Shannon decides to go crazy and even states that she is planning on extending the invite to Vicki! My how times have changed…
Speaking of Vicki, Steve-o, Vicki’s boo, is the “man of” her house. This guy cooks, cleans, and does other miscellaneous chores, but he reminds Vicki he is not her “staff.” Steve seems like a great dude, but he has GOT to be INSANE to be dating Vicki. I mean, Vicki keeps harping on past events with Tamra’s husband, Eddie, and even Steve is like, please stick a sock in your mouth, lady. He suggests she just apologize and move on. What a novel idea!

Tamra’s OTHER new friend, Gina, makes her way over to Cut Fitness for a work-out led by Eddie at his gym. It’s funny to learn that Tamra is the one introducing all these new women to the group. We have Emily, Kelly, Gina, and then some other suckers who didn’t make the RHOOC cast cut. Eddie seems like he is working quite hard for a man who just had heart surgery…I mean, he is doing better than Emily is. Homegirl looks like she is about to barf all over the gym. Post work-out, the ladies have a sweaty “getting to know you” session. It’s super forced and hilarious to watch Gina, Emily, Kelly, and Tamra learn about each other’s lives. Gina shares that her husband works in LA and stays there all week long, while Gina and her 3 children live in Orange County. “I love that Matt’s gone during the week cuz it’s nice to wear sweatpants….” during the week. This girl, man. Knock, knock…there’s nobody home upstairs AT ALL.

Later, we get a glimpse into “survivalist parent” Gina’s life at home. Gina gives us the rundown with her kids: Nicholas, Luca, and Sienna. She shares, “I tend to lose Luca.” My god, someone call Gina’s husband over in LA and let him know that she’s losing kids and they are not wearing underwear. By the way…Why is her husband so very mysterious? Am I the only one who is not quite sure he even exists? I also love that Gina has a glass of wine with her dinner as if it ain’t no thang. Amazing.

After Vicki gets a pep talk from Kelly, she calls Tamra and asks to speak to Eddie. She invites herself to the restaurant and Eddie is p*ssed. He orders himself a cocktail and prepares for the fake apology to ensue. If the guy’s heart wasn’t good before, she’s gonna cause him some serious angst. Once Vicki plops herself down at their table, she admits she “was wrong, 100%” and Eddie looks at her like the creature that she is. Vicki cannot handle being confronted head on with the lies she spread about Eddie’s sexuality and claims that she has been “searching the Bible.” Vicki proceeds to whip out the proverb and Tamra nods along as if she is actually buying Vicki’s crap. “Typical Vicki” nearly drops the ball and tries to blame everyone but herself for the issues at hand. Eddie eventually accepts Vicki’s apology, but makes it clear that it’s “going to be a slow process.” #weremovingon. They all agree that they will “never, ever talk about this again.” HA! Famous last words.

Emily and her Mormon husband, Shane, head out for date night. Emily towers over her sweetie and is a thousand percent too over dressed for the restaurant. It’s their 9th anniversary and that calls for a celebration. Emily explains that Shane doesn’t have to work, “he comes from money,” but because she is an attorney, she could always just do her own divorce. Seems like that scenario may be more realistic than we thought: turns out that Emily wants one more child and Shane is not into it at all. Uh oh. “Happy anniversary!” Shane’s response back was, “Yea, you’re welcome, I don’t wanna mess up your lipstick.” He is SO romantic…

To wrap up the episode, Vicki pops over to see Kelly’s new house. Once the ladies sit down on the sofa, Kelly blind sides Vicki with some news. Turns out that Kelly has been informed that Vicki set Kelly’s ex-husband, Michael, up with a new woman. Vicki sees nothing wrong with the situation and even goes as far as saying, “Steve and I had gone out with them a couple times.” Has Vicki ever heard of girl code? Or even FRIENDSHIP? Vicki has totally crossed an unspoken line here, yet she remains hard-headed while Kelly scream-cries.

Vicki states, “It is not my fault that your husband is dating someone. “ I would be livid hearing that my “friend” set my ex-husband up and then went on MULTIPLE double dates with him and his new lady. Funny how Vicki never shared that information with Kelly until she was called to the plate. Kelly tells Vicki she doesn’t “roll with” girls like her. Vicki obviously thinks she did NOTHING wrong anddddddd we are back in business, guys! Drama has arrived.