The Shahs of Sunset Recap: MJ and GG Hash Out Their Issues 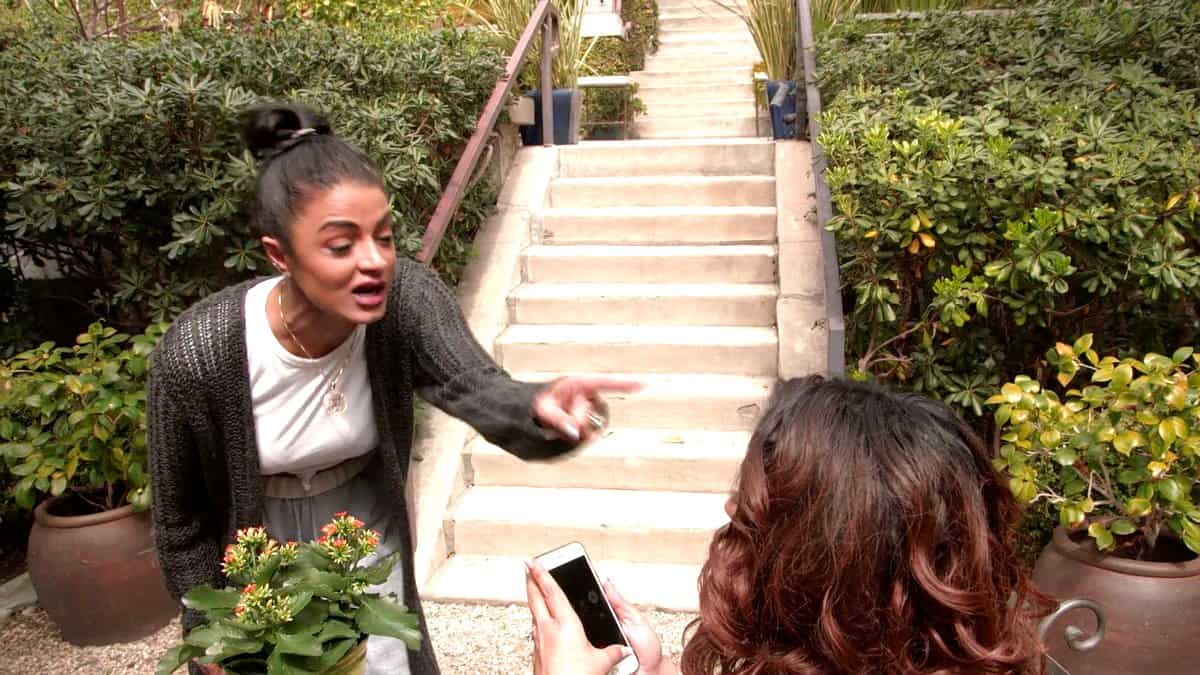 It’s shaping up to be a season of change for the crew of the Shahs of Sunset. Some are moving up, some are moving on, and some are making moves..and throughout it all, drama and hilarity abounds!

Reza has recently purchased a new home for himself, and his husband Adam, and while Adam is anxious to fill it with children, Reza is a little hesitant.  He wants children, as well, but wants a certain amount of financial security first, and the new home and adoption costs are going to cost a fortune! Approximately $160,000 for one child!

But he may have a plan in place to make both of their dreams come, and he’s got his little dog Tini to thank! While they were walking in the dog park, Tini attacked a much larger dog, who just happened to belong to Sheree Funsch, CEO of LaDove, a hair and skin care empire worth millions! When Reza went to apologize for Tini’s rudeness the two began talking about Reza’s fabulous hair, and discussed the possibility of him investing in the business, a move that could net him the millions he’s been hustling for his entire life!  But it may mean putting off plans for a baby a little longer, so he hasn’t told Adam about his plans yet.

Meanwhile, MJ is planning her wedding.  It’s less than a month away, and she’s in a mad dash to make it the day of her dreams.  She wants to transform the venue into a magical forest, and herself into a forest nymph, but mainly she just wants it to be a day of love, where no one “b*tches and moans.” Good luck with THAT!

If MJ wants to avoid any drama, she’s going to have to make amends with GG first.  The two have been on the outs ever since MJ announced Reza was going to be her Man of Honor during their trip to Big Bear.  GG was just not to be chosen, and threw shade at both of them by bringing up their teenage sexcapades in front of everyone! MJ followed up with super shade! She invited GG’s ex husband, Shalom’s other ex wife to her Valentine’s Day party, and got up on stage to announce her arrival!

GG was understandably crushed by the betrayal, and although MJ tried to apologize, the two women haven’t spoken since.  GG wants MJ to own up to what she did, and be sincere about it, but she wasn’t optimistic.

GG’s looking to move on to.  She’s clearly still in love with Shalom, as she’s still wearing his ring..and the tattoo that bear his name. But she’s determined to get him out of her life, and she and Destiney visited a laser center to begin the process of removing the ink.  It burned (just like the marriage!) and will take at least seven more sessions, but she knows the sooner is name is off her body, the sooner she can heal.

And will new cast member, Nema, play a role?! He certainly hopes so.  He bonded with the entire crew when he and his sister, Mona joined them on their trip to Big Bear, but he really felt a connection with GG.  They’d make a gorgeous couple too, if only Nema didn’t have a serious live-in girlfriend!

Nothing happened between him and GG during the trip, but he’s been feeling guilty about their “almost kiss,” and can tell that his girlfriend, Erica suspects something.  Of course, the guys told him he had nothing to worry about, but when he discussed the issue with Mona, she encouraged him to be fair to Erica, and come clean.

Mona’s in a tough position.  She loves her brother, and definitely wants to have his back, but as a woman, and more importantly, as Erica’s best friend, she thinks he’s wrong for harboring feelings for another woman. The siblings have an interesting relationship, to say the least.  They’re oddly close, and since they really don’t look alike, people often mistake them for lovers! But for anyone thinking this is a Persian Donnie and Marie situation, you can relax.  Both siblings say the very idea makes them gag (what a relief!).

Nema feels that growing up without his mother and sister has led him to look for the maternal closeness he missed out on as a child with the women he dates, and he often jumps into relationships when he’s not ready.  This was certainly the case with Erica, who began as his friend, and helped him get over his divorce, before their romance began.  He loves her, and wants to be respectful, and decided to break the news about his near miss with GG while they walked their dog.

Erica was confused at first, and wanted to know what an “almost kiss” was (so do I) and who stopped it (GG did), but she became more and more angry as Nema talked.  She told him that she thought they were on the road to marriage and family, and couldn’t believe he would make such a stupid mistake.  In the end, she suggested they “take a break,” and he moved out of their home.

Destiney is moving on too.  She finally went on a date with Alex, whom she met at MJ’s party.  Destiny is a tough nut to crack.  She’s a “bad a** b****,”  who answers to no one, and men are often intimidated by her.  She needs a man, who is more “alpha,” and has a bigger “peppito” than hers, and the men in her past have fallen, well..short.  But Alex seemed to appreciate Destiney’s independence, and he’s pretty darn cute, so who knows? They also have something pretty important in common.

Both lived through their parents’ separations as children, after their fathers returned to The Middle East for political reasons, and never came back.  It’s made Destiney distrustful of relationships, and “act like a boy,” but something about Alex’s sad story got to her. It seems like they may have made a real connection. He didn’t even mind her being 45 minutes late for their date (she really took that “act like a boy thing to heart!), and they really seemed to enjoy themselves.

Mike is also moving on with his new girlfriend, Morgan, whom he feels is his “best friend.” The rest of the crew seems to love her, too.  They all helped out with Mike’s charity project, delivering blankets, tents, and socks to the homeless.  MJ and GG donated money, but Mike was disappointed that their rift meant that they couldn’t take part in handing the items out.  He felt their constant bickering would create too much drama and distract from the work at hand.  It was probably a wise choice!

Elsewhere, MJ and GG arrange a sit down in a botanical garden, because who can argue in such an idyllic setting? Well, MJ and GG can! As they rehashed GG’s comments and MJ’s betrayal, “Lochnessa” woke up! She said MJ’s actions had been downright nasty, and that she’d purposely set out to hurt her.  MJ ignored all of that, and started to bring up Shalom’s “past,” but before she could finish her sentence, GG grabbed a handful of leaves and threw them in her face, promising to “s**t on” everything MJ tried to do.

MJ was taken aback by GG’s vitriol, and went to sit by her, and hold her hand.  She apologized, and said she wanted them to be “like sisters” again.  Amazingly, all was quickly forgiven, and they went on to discuss the state of GG’s side burns.

The show faded to black from there, but there’s plenty more drama ahead.  Previews for next week show MJ grieving a devastating loss. Meanwhile, GG finally takes steps to file for divorce, and comes face to face with Erica! Stay tuned, viewers, this is about to get good!

TELL US – THOUGHTS ON THE LATEST SHAHS OF SUNSET EPISODE? IS NEMA A JERK FOR WHAT HE DID TO HIS GIRLFRIEND? WILL MIKE & MORGAN LAST? WHOSE SIDE ARE YOU ON WHEN IT COMES TO GG & MJ?