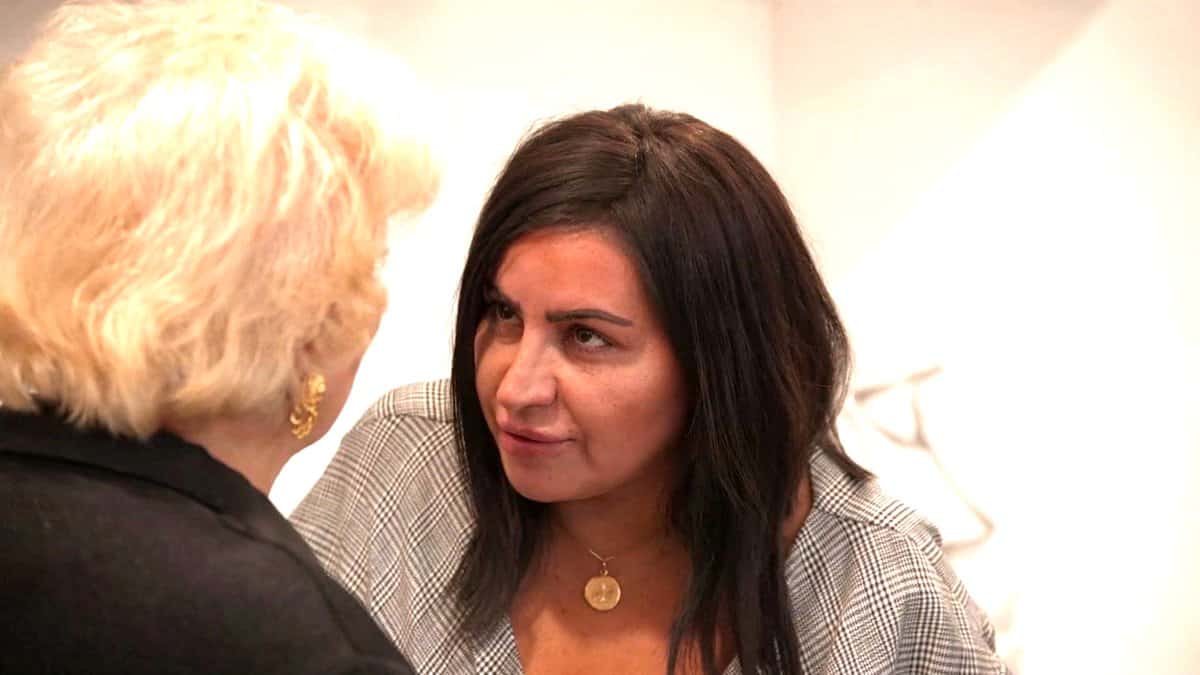 The usually fun loving, hard partying, shade throwing Persian posse of Shahs of Sunset took a break from the drama last night as they said goodbye to a dearly departed soul.  MJ’s beloved father, Shams Javid, passed away after a lengthy illness.

Shams was special to all the friends, and when MJ broke the news to Reza and Mike, it didn’t quite come as a shock, but it was a devastating blow all the same.  Both men had gone to visit Shams in the hospital the evening before, and were glad they’d had the opportunity to say goodbye.

Reza recalled that Shams had been the first Persian adult he had come out to, and how the older gentleman’s loving and supportive response had given Reza the courage to tell his own parents and the hope that he could live an “authentic life” in a culture that is not always accepting of a gay lifestyle.

Mike also had a special relationship with Shams, and pointed out that he was the first parent in their friend group to have passed away, a fact that sadly made them all realize that they would likely suffer similar losses eventually.

Reza immediately wanted to honor Shams and get MJ out of the house and among friends, so he planned a dinner at Mike’s house, and invited all of MJ’s friends to come together and celebrate her father’s life, and pay their condolences.

GG and Shervin immediately jumped into action, picking up flowers for the dinner, and offering to help with food and other arrangements.  GG was extremely concerned about MJ, and feared that she would insist on being strong for everyone. They all wondered what would come of MJ’s wedding plans, as they knew she had wanted her father to walk her down the aisle, and be a major part of her big day.

All of the friends turned out for the dinner, and Mike explained that in Persian culture, friends and family put their differences aside, and come together to “have each other’s back” when a loved one passes away.  When MJ and Tommy arrived, it was clear that the loss had taken a significant toll on MJ.  Gone was her usual boisterous personality, and she looked absolutely exhausted.

MJ was hesitant to go into Mike’s house and join her friends at first because she was uncomfortable with all the attention she was sure to receive, but Tommy knew that she also just couldn’t bear to say that her father was gone.

MJ’s mother, Vida, was also there.  Despite the fact that she and Shams were divorced, she said they were still very much family and friends.  She explained that she and Shams had loved each other since they were practically children, and she, too, had been by his side until the very end.  She recalled that he was a very special and loving man, who had brought all 13 of his siblings to America, and had helped hundreds of others escape the political and religious persecution they had faced in their native Iran.

MJ began to relax once she was surrounded by her mother and close friends.  When Reza asked if she wanted him to cancel their planned excursion to Orange County to go wedding gown shopping, she said that she didn’t.  She still wanted to carry on with her wedding planning, and felt she would turn into a “basket case” if she didn’t continue moving forward.  Reza agreed that it’s what her father would have wanted, and that it would be a “mistake” to “destroy the momentum” MJ had going.

The following day, Reza and Mike joined MJ on the ride to the OC, and they all tried to enjoy themselves, sipping champagne and reminiscing about Shams along the way.  Reza joked that they may be a little “too brown” for the ritzy enclave, inhabited as it was by overly Botox-ed bleach blondes.

Once they were in the store, MJ was in great spirits.  She introduced the staff to her friends, explaining that Reza  was her “man of honor” and joking that Mike was her “d**k meter,” and that if the dress didn’t make him h*rd, she didn’t want it! Unfortunately, her good mood didn’t last long.  As soon as she went into the dressing room, and saw herself in the gown her father would never get to see, she broke down.

Mike and Reza joined her in the dressing room to console her.  Mike assured her that her father would never really be gone, and that he was surely smiling down on her at that very moment.  But it was Reza that supplied the pick me up MJ needed…a beautiful Cartier bracelet that matched his own.  Both men knew that MJ would be alright, as long as she had them, and they’d both promised her father that they would be there to help her through the loss.

MJ pulled herself together, and continued shopping, saying that her father had been tough, and had always encouraged his daughter not to be a “sissy,” so she carried on with the business at hand.

Elsewhere, GG was also taking steps toward moving on.  She visited a family attorney to begin the process of ending her short-lived, but tumultuous marriage to Shalom.  The attorney warned her that divorce was often a long and arduous process, but GG was ready to move forward all the same.  She said she could feel her anger coming back, and didn’t want to go to “that place.” It was time, she said, to “say Shalom to Shalom.”

The only question is, will she say hello to Nema?  He’s still quite taken with her, but was also missing his ex-girlfriend, Erica, and “feeling lost” since coming clean about his feelings for GG, and moving out of their home.  He was beginning to wonder if it had all been worth it. GG was equally conflicted.  She freely admitted that she was attracted to Nema, but wasn’t sure if she was ready to jump into another relationship so quickly.

THE STATUS OF NEMA & ERICA’S RELATIONSHIP IS REVEALED!

GG and Nema came face to face later that evening when everyone came together at a local club to celebrate Mona’s birthday.  It turned out to be quite the awkward evening too.  Erica is Mona’s best friend, and she attended the celebration, as well.  She was also well aware of who GG was.

When Nema introduced the two women, GG thought it took “massive cajones” for him to have brought them together. But Nema was actually pretty nervous about it.  He said that GG was like a “fire breathing dragon,” who could choose to either destroy him, or spare him, on a whim.

Surprisingly, there was no drama between the women, and they were actually pretty friendly toward each other, never once mentioning  GG  and Nema’s “near kiss” in Big Bear.  However, GG did tell Erica that she found Nema to be “a bit of a Nancy,” when it came to “certain things.” Erica asked how long she’d known Nema to make such statement, and GG told her that it had taken “less than 24 hours” to have him figured out.

In the meantime, Nema nervously watched the two women interact from a distance, and in typical male fashion, wondered if perhaps they were arguing over him, or even planning to “share him,” so they could all have a “makeup session” together.

Destiney, somehow sensing what Nema was thinking, quickly disabused him of this fantasy, telling him that he was “selfish,”  and “trying to have his cake and eat it too.” She explained that he had likely made Erica feel very “small,” and that he should have done better by her.  Nema had to agree that it was time to let her go completely, and go back to being friends.

The episode was a little sad, to be sure, and the entire crew seems to be at a crossroads..ready to move on, but afraid to let go.  But next week it will be all about getting “turnt up!” It’s time for MJ and Tommy’s joint bachelor/bachelorette party, and there will be plenty of drinks, and even more drama. Stay tuned!

TELL US – THOUGHTS ON THE LATEST SHAHS OF SUNSET EPISODE?