RHONY Fans Are Upset With Andy Cohen for Defending Bethenny Frankel During the Reunion! 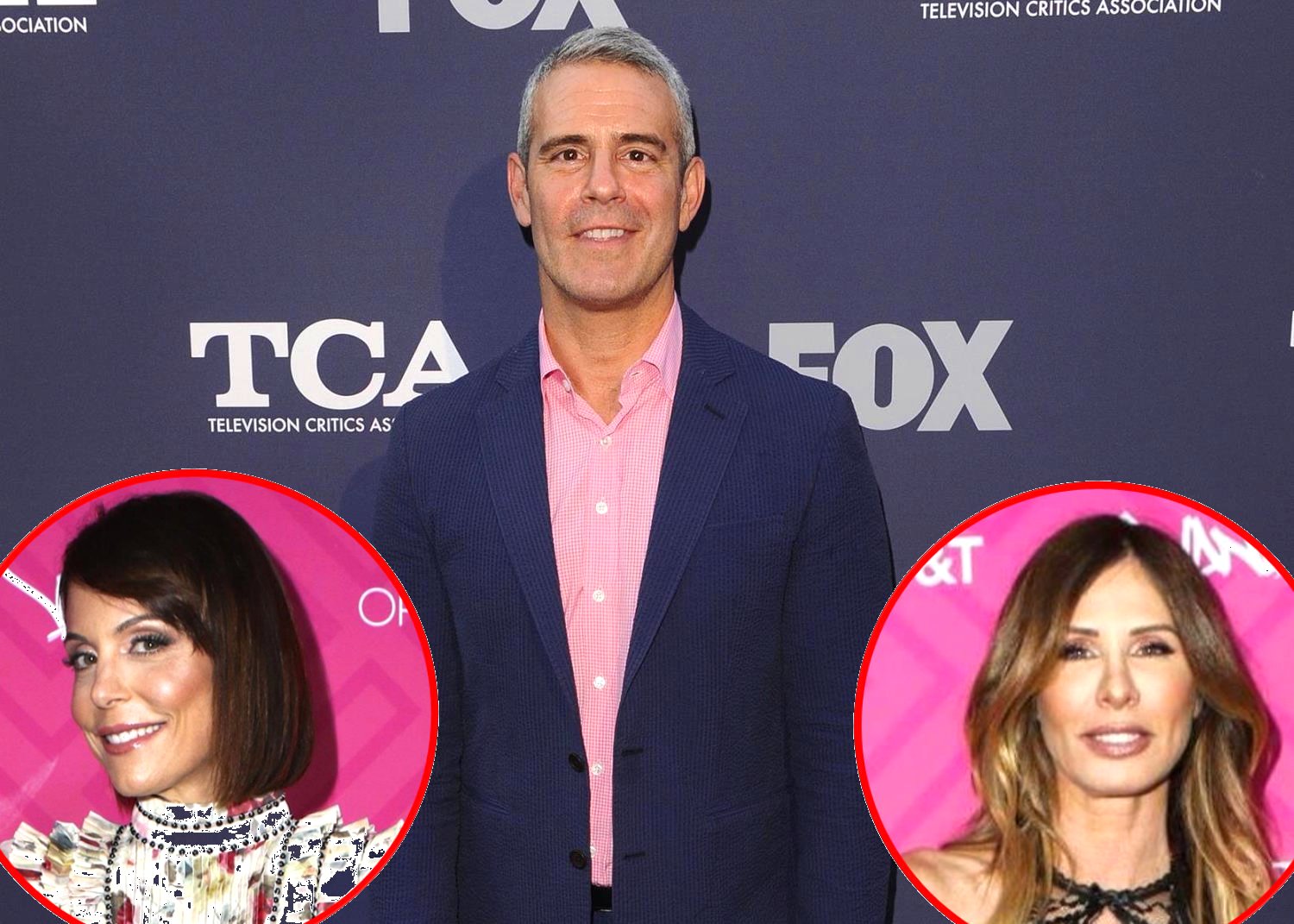 The first part of the Real Housewives of New York City reunion aired last week, and it was pretty much Bethenny Frankel vs everyone else.

Carole Radziwill, Ramona Singer, and Dorinda Medley spent most of the reunion calling out Bethenny on what they perceived to be her many misdeeds from the season. However, following that episode, Bravo host and Housewives executive producer Andy Cohen became the topic of conversation as numerous times during the reunion, he proceeded to defend Bethenny and at one point even told the other women to “shut the f*ck up” so Bethenny could speak.

RHONY fans are now voicing their opinions and most are upset with Andy’s decision to defend Bethenny, as the fans simply believe it wasn’t fair to the other women.

While there were some fans who thought Andy made the right call in having Bethenny’s back, surprisingly, majority of the comments were very negative.

“Andy needs to hop off Bethenny’s d*ck already. We’re only 20 minutes in, have some dignity man,” tweeted one RHONY fan.

“Andy Cohen is snuggled up comfortably in Bethenny’s a*s this reunion,” added another person. 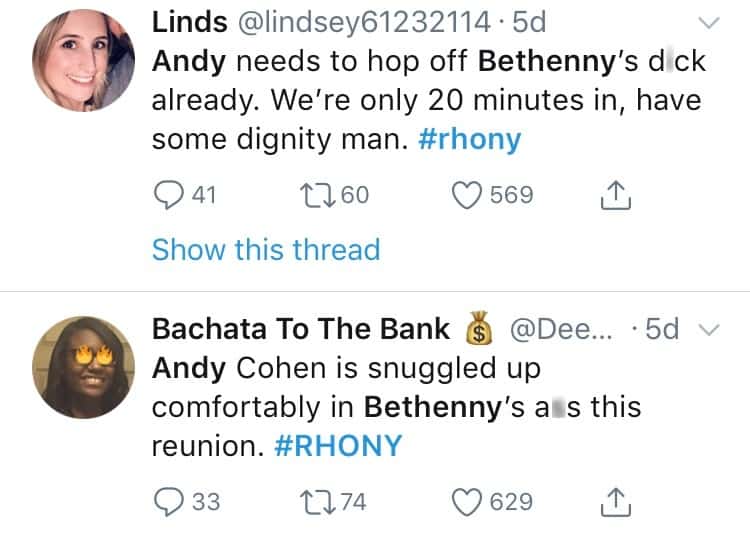 One viewer even accused Andy of being “disrespectful” to Bethenny’s castmates.

“Andy is being rude and obnoxious and so disrespectful to the women except Bethenny,” the fan wrote. “It’s so obvious he is team Bethenny 110%. Not cool!”

In another tweet, one fan vowed to stop watching the show!

“After watching the #RHONY reunion, I may be done with Bravo. @Andy’s bias towards @Bethenny is not just blatant but infuriating. Team @DorindaMedley & @CaroleRadziwill -this reunion was nauseating watching Andy ask biased questions and stand up for bethenny nonstop,” the angry viewer tweeted. 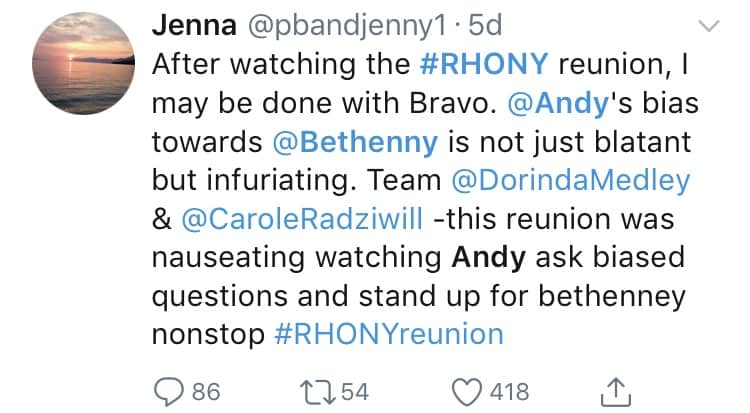 “I thought as the host/moderator @Andy was supposed to be impartial??? I guess he’s not shy about showing his favoritism to Bethenny,” added another Twitter user. 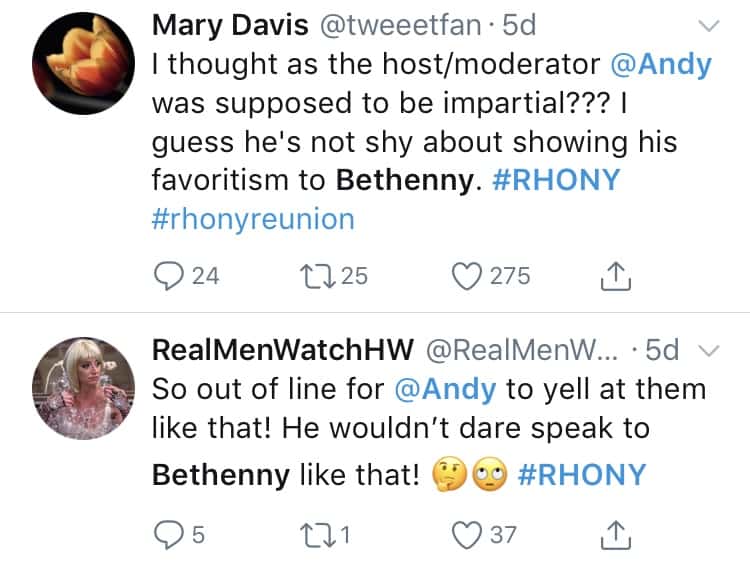 A few others however felt Andy was in the right to have Bethenny’s back!

One person wrote, “Andy’s got Bethenny’s back & I’m ? here for him shutting down these petty b**ches!!”

Another viewer believes Andy was nicer to Bethenny because she’s the only one who treated him with respect.

“People wonder why Andy is Team Bethenny but she seems to be one of the only one on that cast that actually respects him. Everyone else is really disrespectful and I mean Carole with the ultimate disrespect with her phone,” that fan tweeted. 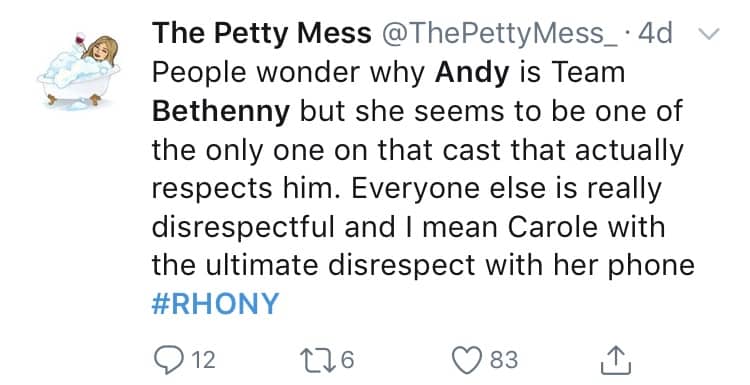 Andy has yet to comment on the criticism. So, we have to ask…

TELL US – DID ANDY GO TOO FAR IN DEFENDING BETHENNY DURING THE RHONY REUNION?