The Real Housewives of New York City Reunion Part One Recap: It’s All About Bethenny 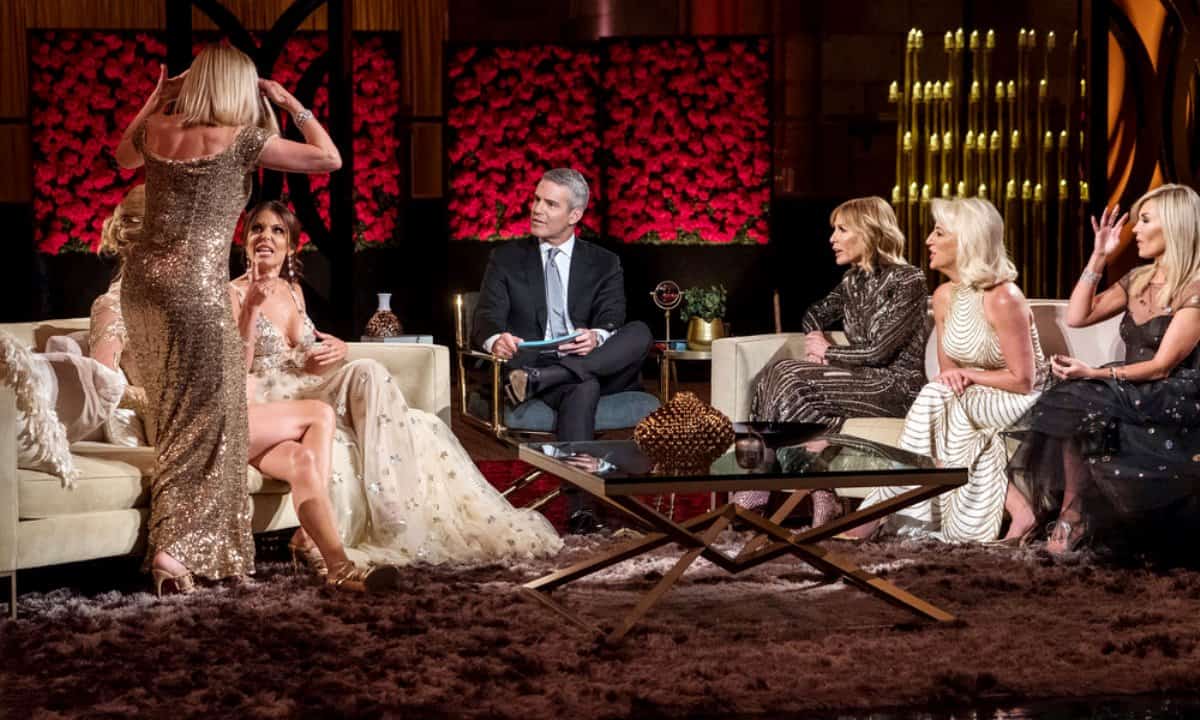 Ugh! Did you catch the first part of the Real Housewives of New York City reunion last night?! If you did, you have my sympathy because your head must be pounding from all the nonsensical bickering!

First of all, the entire show was about Bethenny. You know that thing Andy Cohen does on Watch What Happens Live where he’ll count how many times they say a certain word during the show?  Well, if he had done that with the word “Bethenny” during the reunion, the number would have been in the thousands!

Apparently, some time between Luann’s cabaret show and when they all hit the couches to rehash all the minutia of the season, they all got together and decided that they hate Bethenny, and everything she did, does, or will do for the rest of her life. But then again, maybe Bethenny had it coming?!

Okay, well not “all.”  Luann wasn’t there… she was back in rehab during that time, and Sonja, who was apparently left out of the I Hate Bethenny Club, actually had Bethenny’s back. And Tinsley?  Well, quite frankly I forgot the poor girl was there.  She wouldn’t have been able to get a word in edgewise, anyway, so it hardly matters.

Now, don’t get me wrong. I find Bethenny annoying, myself…especially this season.  But good grief! Watching these women just pile on about everything was a bit much.

It started with Bobby Zarin’s funeral, and the fact that Bethenny and Jill Zarin shared a moment together afterward, during which Bethenny gave her condolences to her former friend, and talked about how special her late husband was. Who could possibly have a problem with that, right? Well, Ramona, Carole, and Dorinda certainly did!

As Bethenny was recalling how special it had been to attend the service, and how she and Jill had been texting ever since, Ramona jumped in to say that she thought it was inappropriate of her to have gone to the production staff to request that they film it.  But Andy said that wasn’t the case.  He told Ramona that they had been invited to the funeral, and that he had wanted to cover it on the show.

Dorinda and Carole agreed with Ramona that cameras didn’t have a place in such a sad and morose event, and that it should have been private. As far as Bethenny’s moment with Jill, Ramona said she felt Bethenny had been “opportunistic” because she made sure the cameras captured it.  Once again, Andy jumped to Bethenny’s defense, and said that he was glad they got the that moment on film.

Bethenny said they should just all be happy for Jill because she was in a really good place, and finding happiness (with a new boyfriend, who once dated Ramona, no less!). Dorinda agreed that she was happy, and asked Bethenny if they’d had lunch recently, and when Bethenny explained that they hadn’t because they were taking baby steps on their road back to friendship, Dorinda said of course, Bethenny didn’t want to go to lunch because there wouldn’t be cameras there.  It was just petty. And why does Dorinda care about the state of Bethenny and Jill’s friendship, anyway?!

And since Dorinda had already opened her substantial mouth, it was the perfect time to launch into that ridiculous “nutcracker” battle.  To refresh your memory, Bethenny’s daughter Bryn had fallen in love with a life-sized toy soldier she’d seen at FAO Schwartz, but by the time Bethenny went back to get it for her, it had been sold, and the little girl was crushed.  So Bethenny asked Dorinda if she could help her find another one by Christmas.

Dorinda made some calls, the toy soldier was located and purchased and delivered to Bethenny just in time for the holiday. Crisis averted, right? Wrong! You see, in Dorinda’s opinion, Bethenny hadn’t been appreciative enough of the fact that Dorinda found the toy soldier, despite the fact that she said “thank you” several times, and even said that Dorinda had ‘saved Christmas.’

Of course, Bethenny explained that she’d been plenty appreciative at the time, and recalled asking for Dorinda’s help, and that after making a phone call, Dorinda’s assistant had found the thing. At this point, Dorinda, as well as Carole and Ramona, who weren’t even present for the conversation, began talking over Bethenny, and saying that her version of events was a flat out lie.

They were so loud, it was impossible to decipher who was speaking, or what they were saying, and Andy became so annoyed that he yelled for them to shut up, so her could hear Bethenny’s “f**king answer!” I must admit, I was yelling the same thing at the TV.

Finally able to continue with her side of the story, Bethenny said that she’d sent several texts to Dorinda, thanking her AGAIN for locating the toy soldier, and even sent her a video of Bryn seeing it for the first time. But Dorinda complained that all of that had been off camera, and that when the cameras were rolling, she hadn’t even mentioned Dorinda had helped her get it.

Two things: first of all, that’s not true at all. Bethenny did mention it on camera (just not enough times) and the whole conversation about Dorinda trying to find it was on camera, so everyone knows she’s good at finding things. Second of all, hadn’t they all just spent 20 minutes droning on about how doing things for the benefit of the cameras was disingenuous, so how is it somehow different but when it comes to Dorinda?!

Then it was time for the “Bethenny doesn’t support other women” debate.  This, of course, stems from the shade she threw at Ramona when she started talking about her skin care line at Bethenny’s holiday party, (ironically the same party where the toy soldier was delivered) and Bethenny said she was doing an ‘infomercial.’ Pot meet Skinnygirl kettle?!

Then, to make matters worse, Bethenny had failed to show up, or even call to congratulate Ramona when it came time for her to throw a launch party for the skin care line.  When Ramona questioned her about it, Bethenny declined to answer, and blew off her hurt feelings…hard!

Now, Ramona was incensed, saying that Bethenny doesn’t care about other women, and they all supported her various business ventures over the years…blah, blah, blah! Bethenny said that she most certainly did support other women in business, but she had a hard time believing Ramona’s business was anything more than a whim, because she’d started “businesses” before that had fallen by the way side when she lost interest, and Bethenny guessed that the skin care products would go the way of all the rest.

Bethenny also said that, in fact, it was Ramona who didn’t support other women’s businesses because she’d said that Sonja’s businesses were fake. That did it! Ramona said that she hadn’t said that…Bethenny had! And she may have been right about that because Carole and Dorinda backed her up, and insisted that Bethenny had absolutely shaded Sonja’s business ventures in the past.

Emboldened by the support, Ramona went on a rant about how she had worked her way through college, while Bethenny’s father had paid her way, and that she’d worked hard for everything she had, blah blah blah. And then out of nowhere, and apropos of absolutely, nothing she finished her rant with “with your fake t*ts!” Wait..what? Everyone was confused by that one!

Andy, who looked like he was beginning to rethink this whole housewives thing, came to Bethenny’s defense once more, and pointed out that the women often came to Bethenny with their problems, and that it had to mean something.  But the Carole, Ramona, and Dorinda were unmoved, and Carole said that Bethenny was simply good at “zeroing in” on people’s weaknesses.

In a fit of utter desperation, Andy tried to steer the conversation away from Bethenny, altogether, and discuss Dorinda.  But somehow, even that quickly became about Bethenny.

Dorinda wanted to know if Bethenny had called her “a drunk” or just said she “was drunk” during their trip to Puerto Rico.  Bethenny said she wasn’t sure what she’d said, but it certainly may have been “a drunk.” Either way, she said she’d already done one intervention that week (Luann’s), and really wasn’t up for another.

But Dorinda was like a dog with a bone. She said that Bethenny’s words had been “hurtful,”  and that if she was truly concerned about Dorinda, she should have had her stay in that night, rather than attending a dinner with her colleagues that ended with Dorinda making an absolute jackass out of herself.

Bethenny pointed out that she’d seen Dorinda drunk many times over the years, and figured she’d pull herself together for the dinner, but instead she’d been sloppy and rude that night, and the next morning, she’d apologized to the wrong man. She also pointed out that any comments she’d made about Dorinda’s drinking had been “constructive” and came from a place of friendship.”

At that, Carole jumped into the mix, saying there was nothing “constructive” about calling someone a drunk on national television.  Bethenny countered that by saying there was nothing “constructive” about calling her a narcissist on national television, either, but it hadn’t stopped Carole from saying that on social media, in interviews, and to anyone else who would listen.  Carole wondered aloud if she had actually said that about Bethenny, and deciding that she had, she told Bethenny “I call ’em like I seem ’em.”

But wait, this was all supposed to be about Dorinda and her drinking, right?  Once again, Andy tried to get back to it, mentioning the many times Dorinda had slurred her words, or started a fight, and even the time she’d cut her hand during dinner.

Bethenny agreed that Dorinda had gotten out of hand, and often sounded drunk when they spoke on the phone in the morning.  Dorinda denied drinking in the morning, and said there’d been times when Bethenny would be drunk in the morning, too, to which Bethenny responded, “yeah right.” Dorinda said it was right.  The level of discourse really could have used a shot in the arm at this point. But no such luck.

Dorinda didn’t want to talk about herself..she wanted to talk about Bethenny some more. She addressed her directly, and said that she didn’t want to “get into it” with Bethenny (um…what had she been doing for the last hour?), and that maybe right now, they just didn’t like each other because Bethenny had said such horrible things about her.

The show faded to black just as Andy asked Dorinda, point blank, if she was an alcoholic.  Next week she’ll answer the question, or perhaps just go on another Bethenny rant. It could go either way.

What the previews did show was that things are going to get really nasty between Carole and Bethenny next week, and when Andy tries to intervene on Bethenny’s behalf, Carole bites his head off.  Or rather, bites the hand that feeds because the side eye Andy serves to Carole in that moment says more “you’re fired” rather than “I accept your resignation.”

Part two of The Bethenny show, err, I mean the RHONY reunion airs next Wednesday at 8/7c. Stay tuned!

TELL US – THOUGHTS ON PART 1 OF THE RHONY REUNION? WAS ANDY RIGHT TO DEFEND BETHENNY OR WAS HE TOO BIASED? WAS BETHENNY GANGED UP ON OR DID SHE HAVE IT COMING?