The Real Housewives Of New York Finale Recap: A Good Day For A Cabaret 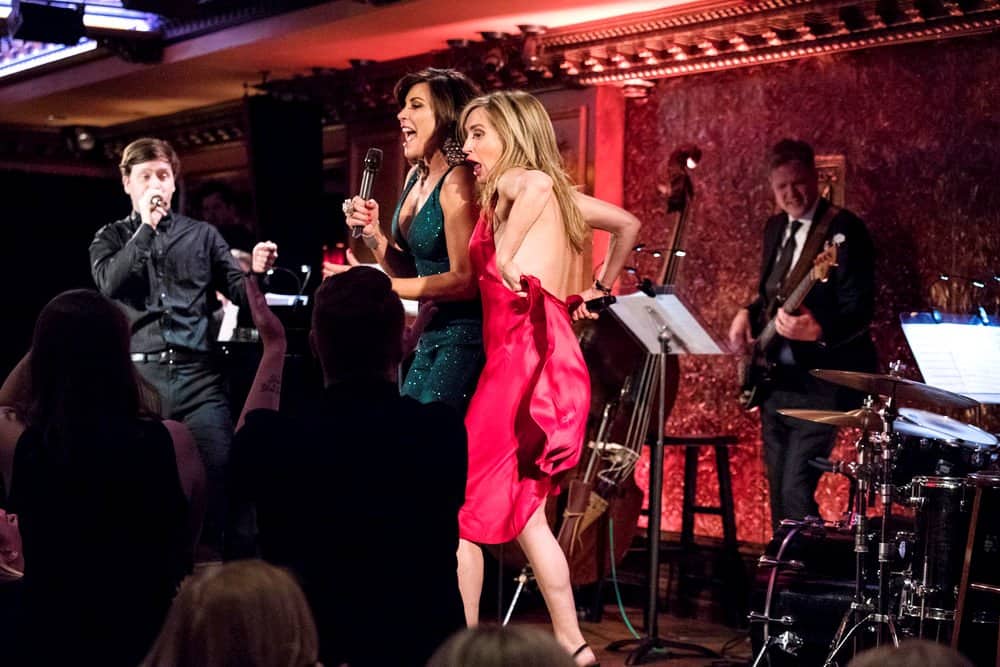 The 10th season of The Real Housewives of New York came to a close last night, and while it had its funny moments, it wasn’t nearly as explosive or dramatic as I thought it would be. In fact, it was a little sad.

Luann was gearing up for her cabaret show, “#CountessAndFriends,” and everyone was planning to attend.  But on the morning of the show, it suddenly occurred to Dorinda that she hadn’t received an invitation for her on-again/off-again boyfriend, John.  She called Luann and asked if he could come, but was told that there were no more tickets available.

Dorinda was upset, and assumed Luann was still sore over the argument they had in Cartagena, which neither has been able to stop talking about since.  She texted Luann and told her that she was “unkind” for leaving John out after knowing him for so many years.  But it was the day of the show, and Luann had rehearsals and dress fittings, and simply no time to deal with petty nonsense.  Besides, have we even seen John more than two or three times this whole season? Absolutely not.  Dorinda wasn’t thinking about him until she saw the opportunity to use him as the catalyst to another argument with Luann.

But as angry as she was that John had been left out, she became downright livid when Tinsley told her that Luann had invited Scott.  Dorinda sat at the table with the other ladies during the show, shooting Luann dirty looks and telling everyone (loudly) that she had been the one to get Luann the Jovani dresses she was wearing.

Luann could hear her, but was completely unbothered.  She handled herself like a pro onstage, singing off key, to be sure, but as Carole pointed out, it was clear that she was “in on the joke.” Luann was able to laugh at her recent troubles as well, joking about being “detained,”  and how “exhausting” it was to get through a day in NYC without a 10am drink at The Regency.  It was actually pretty funny.

Of course, Luann also brought Sonja up on stage, and as usual, she put the straw in the drink.  During a pitchy rendition of “Money Can’t Buy You Class,” Sonja ripped her dress off, much to the amusement of everyone in the audience.  Even Luann took it in stride, despite the fact that her mother and children were there, and she’d asked Sonja to refrain from showing T&A. But Sonja figured if her own kid were there, she’d do it, so why not? And luckily for everyone, she was wearing underwear, so it all stayed pretty PG.

When the show ended, the ladies headed to the after party–even Dorinda, despite the fact that she’d said she wasn’t going.  She’d had a lot to drink at that point.  She’s had a couple glasses of champagne at Tinsley’s prior to the show, and several during the show. He eyes were completely red and she was slurring her words.  It was definitely time to call it a night.  But she was on a roll, going on and on about the dress and John not being invited to the show.

Sonja told Bethenny that Dorinda needed to “go away like Luann did,” although she admitted that she wasn’t one to talk about someone else’s drinking–glass houses and all that–but she said that maybe Dorinda would like rehab.  Bethenny wasn’t so sure that rehab was necessary, and said Dorinda’s behavior reminded her of her own meltdown in Cartagena. Except it was nothing like that because Bethenny hadn’t been falling down drunk. At the same time,  Bethenny didn’t have the excuse of being falling down drunk to justify her behavior, either, so it cuts both ways.

Bethenny and Carole actually shared a true girlfriend moment for the first times this season.  They sat at the bar, talking about their lives and the things they had planned for the summer–nothing serious or heavy, at all, and it seemed like old times for a few minutes.  And then Ramona came over.

She said hi to the ladies and started to talk with them, but Bethenny told her they were having a “private conversation,”  and to leave them alone for a few minutes.  But Ramona was determined to talk, so she asked how long they needed. Bethenny told her to just let them have their conversation, and they’d let her know when she could come back.  Ramona said that she’d actually wanted to talk to Bethenny about something, and Bethenny told her to call her secretary and make an appointment.  It was beyond rude.  I mean, Ramona can be annoying at times, but she wasn’t being mean, and Bethenny’s treatment of her only serves to make Bethenny look bad.

But Ramona’s used to Bethenny’s mean girl act, and was undeterred.  She told Bethenny that she’d been hurt that she hadn’t come to the launch party for her skincare line, particularly since she’d always supported Bethenny’s endeavors.  Ramona also pointed out that the fact that Bethenny hadn’t even called to wish her luck or congratulate her–a bad look for someone who claims to support women in business.  Bethenny just looked at Ramona and said “ok, noted,”  but offered no explanation for her behavior.  Ramona asked her why she hadn’t come to the party, Bethenny said she didn’t feel the need to explain.  Ramona looked like someone had slapped her face, and just said “wow, Bethenny,”  and walked away. 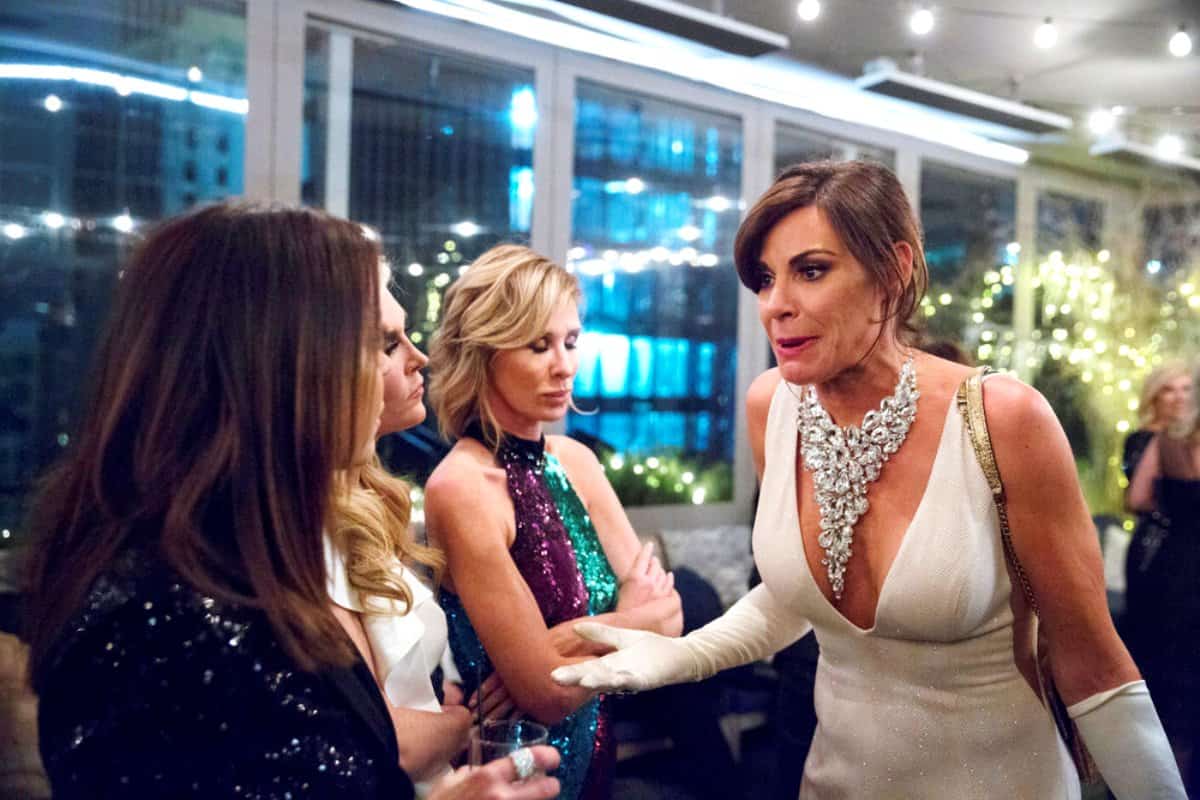 Dorinda, now very very drunk, was still going on and on about John not being invited, and when Luann joined the after party, wearing yet another Jovani creation, she started in on that again too.  Bethenny tried to calm her down, and explained that maybe Luann had actually invited Scott to the cabaret because Dorinda had gotten upset about John not being invited, and had wanted to avoid getting into hot water with Tinsley the way she had with Dorinda.  But Dorinda wasn’t interested in any explanation at that point, so she went to the bar to grab another drink.

In the meantime, Bethenny went over to tell Luann what was going on.  Luann said, of course, John should have been included, and she’d assumed Dorinda would be bringing him.  She added that she’d only extended an impromptu invite to Scott as an afterthought. Bethenny encouraged her to explain it to Dorinda.

Things only got worse at that point.  As soon as they were face to face, Dorinda said, or rather slurred, “You look great. Congratulations. Thank you for having me and thanks for inviting Scott,” and walked away, leaving the Countess confused and disappointed.  After all, after everything she’d been through in the past year, Luann thought that Dorinda would be the one cheering her on the loudest.

Carole and Bethenny, on the other hand, ended the night on good terms. They hugged, and Carole said that she had no doubt they’d find their way back to their “sweet spot” sooner rather than later.

But perhaps she spoke too soon? She and Bethenny are going to go at it big time at the reunion… In fact, word on the street is that Bethenny’s going to get called out by nearly the entire cast.

Stay tuned! The ladies take to the couches next Wednesday at 8/7c. You can watch the dramatic RHONY reunion trailer here in the meantime.

TELL US – THOUGHTS ON THE RHONY FINALE EPISODE?