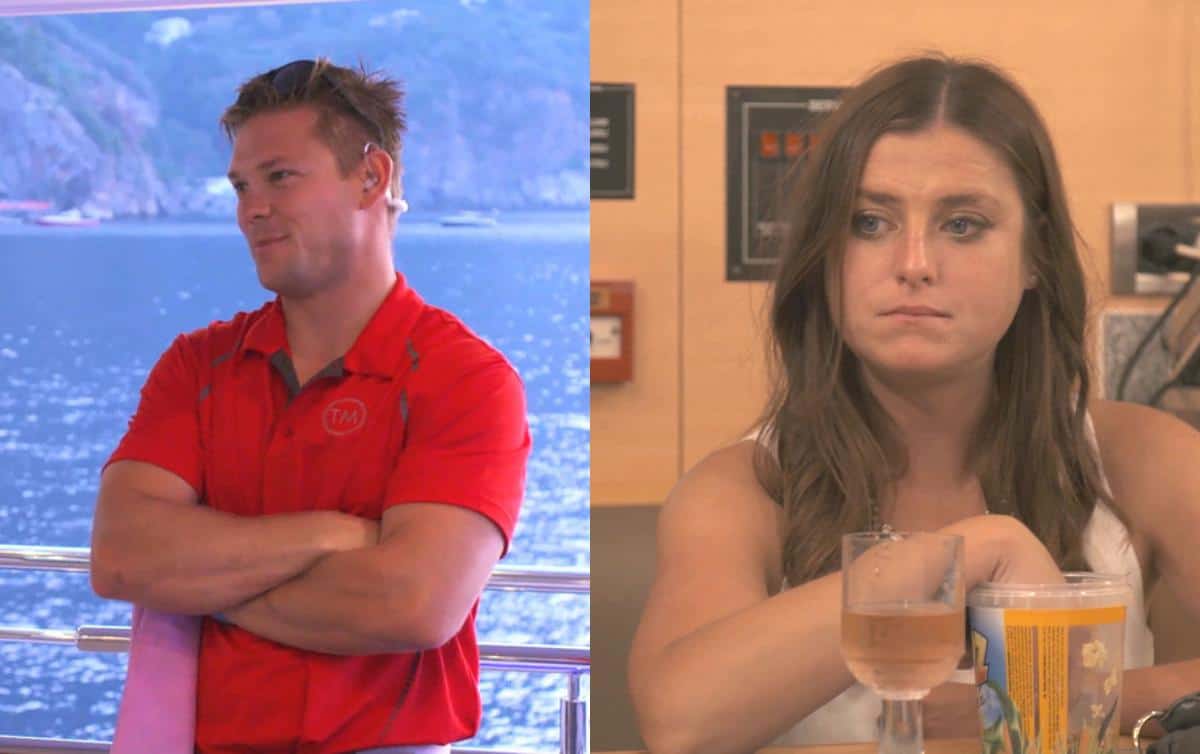 It’s the last charter of the season on this episode of Below Deck Mediterranean. Between the Hannah/Conrad issues and the Brooke/Joao bickering, I feel like I’m watching a soap opera full of love triangles and heart ache.This episode picks up right where we left off last week… Conrad and Hannah are having a private argument away from the group whilst out to dinner. Conrad officially breaks up with Hannah and although you can tell Hannah is totally upset, she lets Conrad know, “You don’t need to feel sorry for me, sweetheart.”

As one couple ends their relationship, another “couple” is struggling. Brooke is getting more and more wasted and Joao is getting more and more flirtatious with Kasey. I don’t quite understand Kasey with her bleached hair and I really do not understand her fashion sense. “I don’t want this dress to be wasted.” Right, Kasey. It looks like you got that dress from Jessica Rabbit’s closet and your chandelier earrings look like you snagged them from your dress-up jewelry Caboodle.

Post dinner, the gang piles into cabs and split up. Half of them head back to the boat while Joao, Brooke, Kasey, Jamie, and Colin continue to drink. Brooke is showing a new insecure side of herself to Joao, but I don’t really blame her. Joao is literally throwing himself at Kasey and even joins Kasey in an awkward air “a*s slapping” gesture. As Brooke breaks down at the bar, Conrad chats with Adam back on the boat regarding the break-up with Hannah. Adam advises Conrad to “talk to Poppa Bear” and as the dudes smoke cigars, Hannah ruins the moment by plopping down in the midst of the convo. She asks Conrad, “Can you shut the f*ck up and go to Prague with me?” Hannah wants Conrad back ALREADY and is essentially trying to call his bluff, but Conrad sticks to his guns. No Prague. No way.

This is a tale of the spiteful crew. After Brooke storms off and dances with poor Colin, Joao states, “now it’s gonna be like I’m going to have so much fun now. Watch me.” Ugh. He is the worst. Later, Hannah continues to stalk around the boat, the drunk crew returns, and everyone eats late-night. It’s just enough time for Joao to continue his flirtation with Kasey and he lay down beside her. Kasey makes it clear that “He’s not on me,” and ever the gentlemen, Joao, replies “Not yet.” Brooke is absolutely wasted and is feeling super upset about Joao’s actions. Joao knows exactly what he’s doing and of course Colin runs to Brooke’s rescue once she runs off. Poor guy. You can almost see the heart emojis coming out of his eyes. I wish Brooke would just give him a chance. Sigh. I say the crew bans together and throw Joao and Kasey off the ship. I don’t feel like anyone is gonna miss either one of them.

The next morning, the majority of the crew is nursing nasty hangovers. Brooke knows she is mad, but can’t quite put her finger on what set her off. She asks Colin, “Do you remember why I was annoyed?” Woopsie. Despite her drunken antics, Colin is still head over heels for “the princess.” Even if Brooke did get fall down drunk the night before, I really don’t feel like she should be the one who is embarrassed by her actions. Right is right and Joao is just plain wrong.

The heads of the crew gather to learn about the final charter: a group of “self-proclaimed Daddy’s girls.” Gag. As Hannah sits elbow to elbow with Conrad, she explains that “Honestly if the FBI wants to look for a new way to torture people, they should put you on a boat with your ex-boyfriend.” LOL. Later, Colin gets permission to get off the boat for a nice dinner with his parents. In case you forgot, his parents came from NY to surprise Colin. How adorable is that?! It was definitely a welcome escape from the boat for Colin.

I actually cannot believe that Brooke is TALKING to Kasey after last night. Kasey tries to play “innocent,” but she pathetically throws herself on Joao night after night. I think she is a shady character. Just like Joao. A match made in heaven.

The crew lines up for the last charter of the season and I can already sense that these guests are going to be a total snooze fest. The daughters are trolls and their husbands do not speak. And then there’s the primary. “The age difference of the primary and his girlfriend kinda remind me of Hannah and Conrad. Robbing the cradle!” Good one, Chef Adam. The crew decides to turn it up for this final charter. Everyone seems to be on their A game: Hannah is actually working, Adam is feeding the gang, and Joao and Brooke are sucking face publicly. Gross. It makes for a totally weird vibe for everyone else working on the boat. Speaking of weird vibes, it appears as though there is a strange relationship between the primary’s daughters and the primary’s young girlfriend. Because these are the most boring charter guests EVER, a lot of focus goes onto the crew and their relationships.

Let’s start breaking down this whole Joao and Kasey crap. Joao asks Kasey, “On a scale of 1-10, how much are you gonna miss me?” When Kasey asks Joao the same question, Joao says he will miss her “the full ten.” Poor Brooke. While the guests enjoy some pre-dinner music and then sit down for a specially requested “Italian-themed” dinner, Colin decides to bite the bullet. He explains “I really wanna tell Brooke how I feel.” Oh God, please don’t Colin. I cannot stand to see you have your heart broken. He somehow does not hear my pleas through the television and just lets it rip. He tells Brooke “Since like the first week, I’ve had like a thing for you.” Brooke has totally friend-zoned Colin and has chosen the wrong guy. Colin is such a sweetie. He even makes it clear that he is not trying to get in the middle of Brooke and Joao’s relationship. You can tell that Brooke knows she is breaking Colin’s heart, but she explains that “I care so much about him, but just not in the romantic sense.”

The next morning, Kasey and Joao are the only ones awake. Interesting… Joao tells Kasey that he is not ready for that “type” of relationship with Brooke, despite being committed to Brooke. What is with this guy? He’s a total dog. The conversation continues and Kasey gets up her nerve to say “I feel like if I didn’t get up, that wouldn’t have happened.” She is referring to the night Joao first kissed Brooke. Kasey was sitting at the table, too, and the minute she got up, Joao made his move on Brooke. Kasey’s hunch was proven true the minute Joao stated that Kasey was, “One million percent right.” So, in a nutshell, Joao only kissed Brooke because his bleached beauty decided to leave the table and alas, when Joao wants to make-out, he wants to make out right at that moment. Brooke just happened to be at the right place at the right time….”one million percent right”…..