Home Below Deck Below Deck Mediterranean Recap: Definitely Not Prague 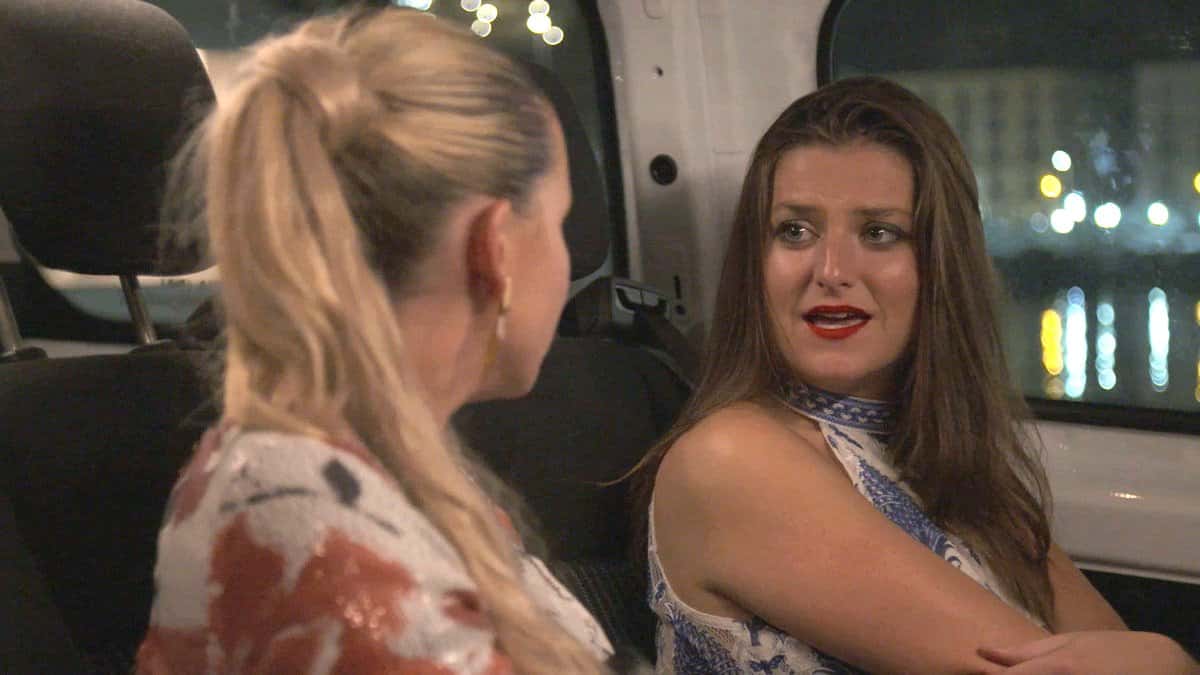 Joao is shamelessly flirting with carrot head Kasey and giving her false hope that perhaps sooner than later she will break her “eight year spell.” Ooph. Joao leads Kasey on by telling her that she is “a million percent right”- if Kasey hadn’t gotten up at that fateful dinner, then he would have never kissed Brooke, and therefore Kasey might have still had a chance with Joao. So awful of him to do this. Poor Brooke.

After much ado, Hannah gets her flight business changed. No Prague with Conrad. And she is certainly not letting this whole situation go without stating her annoyances to Conrad. “If you were a gentleman then you probably would have paid for half.” Hannah, why don’t you just sell some of your “superficial” articles of clothing? Or jewels? Or perhaps find yourself a nice sugar daddy and you can be reimbursed in no time?

The world’s most boring charter guests continue to be boring and the crew is left to figure out ways to make the day go by faster. For instance, Colin’s backflipping off of the boat and for a moment I thought he was jumping because Brooke turned him down. But alas, he was just doing it for entertainment because Lord knows these guests are not supplying much.

Poor Brooke has no idea that Joao, the snake, has been chatting it up with Kasey. Kasey seems to loooove this little bit of information and states that Brooke and Joao are “both lying to themselves. And to each other.” Captain Sandy is FINALLY happy with Hannah’s performance…it only took Hannah an entire charter season and a breakup to get her sh*t together. Hey. It’s never too late to stop being an a*shole, amiright?

The next morning, the crew preps for the end of the charter AND the end of the season. Adam does his final breakfast and one of daddy’s daughters is hung over hard. The crew rolls up to Sorrento smoothly and throw on their whites to say their goodbyes to the boring guests. A thick envelope gets handed over and the guests go on their merry way. The next stop for the crew is Naples, but Captain Sandy has them working up to the very end. They dock, clean, and talk tips.

When Hannah asks Brooke to take a break and chill with her over a glass of wine, I am screaming for Brooke to run. Anything that has anything to do with Hannah could result in psychotic behavior and or injury. I fear for Brooke, especially when Hannah states, “I could quite happily put my entire charter season tips on the fact that he [Joao] will f*ck you over.” Uh, what? What happened to two girls, just sitting on a boat, having a glass of wine? Leave it to Hannah to ruin a perfectly good situation. Don’t say I didn’t warn Brooke…

Anyone else notice that Joao is sitting riiiiiiight in between Brooke and Kasey for the tip meeting? I am over his antics. Captain Sandy talks tips and then explains that she will be joining the crew for a celebratory end of season dinner. Everyone’s face momentarily drops because that means they may have to actually behave at a dinner. But, nonetheless, they waste no time getting ready. You know it’s a night out when Hannah pins in her faux ponytail. It’s time to party! I mean, Colin even shares a RAP he has written about the crew. He roasts each member of the crew and slams Adam with the line, “Maybe that’s because you never made us dinner.” BURN. Despite it being slightly hilarious and entertaining, Colin should probably stick to yachting and shy away from rapping. Just a suggestion.

Once arrived at the restaurant, Conrad sprints out of the cab to the dinner table in hopes of staying super far away from Hannah…but alas, she somehow wounds up right next to her ex. Over a somewhat adult dinner (because Captain Sandy is chaperoning), the crew goes around the table saying favorite memories and what plans are in the future. Captain Sandy asks, “Conrad, what’s next for you?” Brooke spits out, “definitely not Prague” without even thinking and cue Hannah’s death stare. Everyone giggles, but we all know that Brooke will face Hannah’s wrath momentarily. Captain Sandy makes a lovely speech to her crew, chugs her wine, and then leaves the “kids” on their own.

Joao apologizes to Conrad and the dudes hug and make up. This totally adds fuel to Hannah’s fire and she is seething over the Brooke comment. Hannah goes to smoke a cigarette and Jamie joins her. While Hannah gets amped up to verbally accost Brooke, Joao seems to be on an apology tour. But nothing Joao can say will ever change Hannah’s opinion of him. Somehow, Hannah gets into a cab with Brooke, Joao, and poor Jamie. Hannah lets it allll out on the cab ride back to the boat. Conrad is thanking his lucky stars that he dodged the Hannah bullet, but Hannah’s fellow passengers aren’t as fortunate.

The poor cab driver has to sit there and listen to Hannah drunkenly “sweetheart” talk to Brooke about Joao. “With all due respect, f*ck off.” Isn’t Hannah the oldest one on this boat? Why is she behaving like a five year old? Back on the boat, everyone seems to be playing a fun new game called “Avoid Hannah.” We have Conrad steering clear of her like the plague. Brooke tip-toeing to avoid her. It’s quite funny to see, but it all comes crashing down when Hannah wins the epic game of hide and seek. She has located Conrad and won’t leave him alone. “Baby, are you not going to give me a hug?” Oh dear. Hannah is beyond when she starts asking Conrad if he would be angry if she saw another guy and then the next thing you know, she’s begging him to take her pants off and that’s all she wrote.

The next morning, post “break-up sex,” Conrad, Hannah, and the rest of the crew begin their final goodbyes for the season. I love how nobody gives a sh*t anymore. The boys are outwardly making fun of Hannah the “dragon” and laying into Conrad for “snuggling” with her. Must be the last day.
Colin is the first one to leave. Followed by Jamie. Seems to me that Bravo set this up perfectly. Ya know. The members you forget about head out first. I just wish that Kasey left like…7 charters ago. She’s still a liar. And an attempted “boyfriend stealer.” I’m happy to see her carrot head go.

Despite trying to end the season on “good terms,” Joao avoids Hannah and hugs it out hard with Captain Sandy, as she is somewhat of a mother figure to him. Plus, he’s a kiss a*s and managed to smooth talk his way into her heart…much like many other female crew members on this boat (ahem Brooke and Kasey). When Brooke sees Hannah for her farewell, Hannah says, “I do hope things work out with you and Joao.” This b*tch Hannah is crazy, but Brooke is totally the better person. I worry about her relationship with Joao, but Joao and Brooke are off to Florence. It’s kinda cute to watch them go.

Adam shares that after “ten years of yachting,” this season has rejuvenated him. Off he goes into the Italian morning… And then there were two. Dragon Hannah and Conrad are left contemplating their “relationship.” I cannot believe that Conrad could even entertain Hannah a minute longer. He claims he will never date again while on a yacht, but I don’t believe him for one minute…especially when he cryptically tells Hannah, “See you soon.”
Ah, Hannah. The girl who has decided to never play with guests or fellow crew members ever again and so instead, “Next year I will just play with myself.” Woof. Hannah goes on to say, “I don’t regret what happened with Conrad.” Of course you don’t! I mean, what kind of person says, “I’m gonna take all my tips and spend them on therapy??”

Hannah and Captain Sandy plop down for the final time to discuss the season and they go back and forth with apologies and smiles. Besties! I’m just as thrilled as Sandy is to see Hannah exit the yacht…but now I’m left wondering who on Earth is going to finish all of that booze leftover from the charter season??

TELL US – THOUGHTS ON THE LATEST EPISODE OF BELOW DECK MEDITERRANEAN?