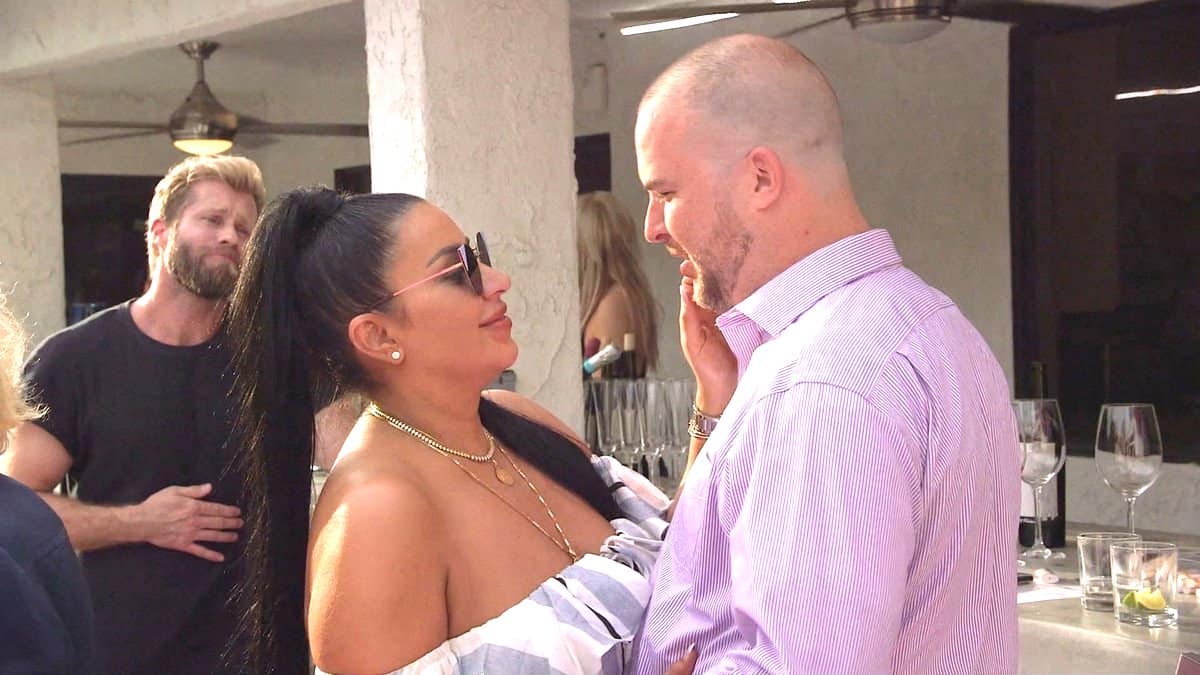 The Shahs of Sunset crew returned last night for some fun, sun, and a whole lot of drama! Each member is on the cusp of change in their lives, and some are handling it better than others.

When we picked up with the Persian posse, MJ was 4 weeks out from her wedding day, and the stress was really starting to get to her.  Her fiancee, Tommy, was in Atlantic City for his bachelor party, and as she sat with her wedding planner making last minute decisions, she began to resent the fact that he wasn’t taking a more active role in the process.  In fact, other than the video chat they had, Tommy hadn’t even met the wedding planner.

Of course, the entire process was made all the more stressful by the absence of MJ’s father, who had recently passed away.  Like all brides to be, MJ dreamed of having her father walk her down the aisle, and knowing that’s not possible puts a pall on what should have been one of the happiest days of her life.  As she wondered aloud who would walk her down the aisle now, her wedding planner came up with a perfect, but heartbreaking solution: MJ would walk down the aisle by herself as a way to honor her father, and show that no one could ever take his place.

But before the wedding, comes the “Bridal Bath,” a Persian tradition with a new world twist.  The event is similar to a bridal shower in that friends and family are on hand to celebrate the upcoming nuptials, but this is MJ we’re talking about, so of course, the affair had to be extra fabulous and sexy.  It would also be co-ed, and she was excited to share the day with Tommy.

But once again, Tommy seemed less than interested in the details.  He called it “your bath” when he and MJ discussed it, instead of “our bath,” a distinction that wasn’t missed on MJ.  She was trying to exercise patience, but it was beginning to run short.

Nema was also trying to be patient.  He’s got it bad for GG, but after her tumultuous, short-lived marriage, she’s just not ready.  But he’s still trying, and she doesn’t mind the attention one bit!  Nema fawns over GG, and gives her the constant attention and adoration she so clearly craves.  According to GG, every girl “should have a Nema,” a man who boosts her ego and tells her she’s beautiful whenever she needs to hear it.

And Nema is working hard…literally.  She went to him to get advice on promoting her line of cannabis products, which she uses medicinally to help with the pain and inflammation of her arthritis, and he vowed to do all he could to help her.  It was a mutually beneficial arrangement, as far as he was concerned…if he could help her get rich, and then marry her, they’d live happily ever after.  For her part, GG knew she could count on him to work hard for her because he was so desperate to impress her.

GG enjoys torturing him with what he can’t have too.  She took him to a sex shop to search for the perfect gift for MJ and Tommy’s bath, and the poor guy just stood there drooling and wishing and hoping.  He was trying to act cool, as though he spends all sorts of time in sex shops, but GG could tell that he wasn’t comfortable, and found it hilarious.

In the meantime, Destiney was planning to take things to the next level with her new guy, Alex.  She’d met him at MJ’s Valentine’s Day party, and the two had enjoyed a fantastic date, during which they realized they had a lot in common.  Destiney is skiddish about love, and was just starting to let her guard down…but then he let her down.

She’d invited him to come to a luxury car show she was hosting so he could see her as the “boss b***h” she is, but as the evening wore on, and Destiney’s other friends began to arrive, Alex was a no show.  She tried to call, but got no answer.  She was crushed.  She really felt like they’d had a connection, and just stands her up without a word?! MJ wasn’t having it.  She called him, and left a scathing message, thanking him for “showing his true colors” before her friend wasted any more time on a “POS,” like him.  Take note Real Housewives of well, anywhere…this is girl code.

Reza may have some explaining to do soon, too.  He handed over $500,000, his entire life savings to The Funsches, the couple behind the mega haircare empire that launched such brands as Bed Head, for a 50/50 stake in a new line of products he is helping to develop, and his husband, Adam, is sure to be angry about it.  First of all, Reza made the investment without speaking to him first, and while it’s his life savings, they are married now.  And Adam wants a child–stat–and surrogates don’t come cheap.  He’d been hoping they’d use the nest egg to start their family.

But Reza, as usual, has dollar signs in his eyes.  That man loves to make money, and he’s not afraid to say it.  He suspects that if he’d married a Persian man, this wouldn’t be a problem, and he’d be thrilled with Reza’s business acumen.  Besides, he figured that it was a sound investment, and he expected to make a huge profit and residual passive income that would set them (and their future children) up for life.

On the day of the Bath, each cast member still had their various relationship issues on their minds, but MJ was determined to show everybody a good time.  She rented a home for the occasion, complete with swimming pool, open bar, and strategically placed make over stations, where he guests could get glam.  Naturally, Reza opted to have a makeup artist give him a smoky eye, and we’re not talking a little shade here and there, either.  He went full blown heroine chic raccoon, and you know what? He worked it!

MJ was working it too! She had no fewer than 3 wardrobe changes, and was happily showing off the results of her new workout regimen. She’d lost 25 pounds, which somehow all went to her butt, and when she strutted out in her tankini, flat booty-ed women around the world turned green with envy.

But there was something missing–or should I say someone? As the festivities got rolling, and everyone started getting “turnt up,” Tommy was nowhere to be found! MJ was fuming, but  when he finally did arrive things only got worse.

Tommy’s a playful guy, and that’s nice–sometimes.  Other times, you want to smack him, and MJ was clearly getting close to that point.  When he saw her in her bathing suit, clearly fresh from a spray tan, he told her she looked like a “hot Dorito.” Okay, she sort of did.  But, I ask you, who wants to hear that from their fiancee?!

A short time later, MJ pulled Tommy aside to discuss wedding rings, or more to the point, Tommy’s refusal to wear one.  He claims he simply doesn’t like rings, and would never wear it, but, for MJ, it’s a matter of respect.  There’s also a double standard at play, as Tommy doesn’t like it when MJ doesn’t wear her engagement ring.  She asked him if he even wanted to get married, but he just kept making jokes.  MJ was noticeably upset, so he straightened up, for a second, and finally said he’d do whatever she wanted.

Finally it was time for the couple to sit down, and open the gifts their friends had brought them, and even that became awkward.  GG was the first to present them with a package, but considering that it came from a sex shop, and MJ’s mother, Vida, was sitting inches away probably expecting to see her daughter open a far more chaste gift, like oh, I don’t know, a toaster, she probably should have just said her gift was being shipped at a later date, or something.  But no. Instead, Vida watched in horror, as her daughter opened a pair of love cuffs, and was promptly put in a playful, but compromising position by Shervin.  The older woman found it disrespectful and distasteful, and wasted no time letting everyone know it.  She chastised Shervin and GG, and said she would NOT be attending the bachelorette party.

At that point, MJ’s trainer spoke up, and made a toast to MJ’s late father, a far more appropriate gesture than the handcuffs, and MJ became emotional at the mention of her father.  And what did Tommy do? He laughed at her! Granted, he was just trying to tease her out of her funk, but damn, dude, show a little sensitivity!

MJ was annoyed, but she tried to ignore him.  Tommy, however, was on a roll.  When MJ thanked her friends for being there for her during her time of grief, and specifically mention her assistant, Sienna, Tommy laughed, and said Sienna wasn’t exactly there for MJ out of the goodness of her heart–she was a paid employee, after all.  Seriously?! This guy is a mess! I mean, not only was he cracking jokes, during what was supposed to be a heartfelt moment, he was being pretty rude toward her assistant, as well.

At that point, MJ had had enough, and she asked why she was even marrying an “idiot” like him.  Tommy, of course, found this hilarious, and said he really didn’t know.  Not the response MJ wanted to hear.  She went off! She called him an a**hole, and told him to “shut the f**k up!”  The party came to an abrupt halt at that point, as everyone just stared at the couple in disbelief.  I mean, this was their Bath, and they were supposed to be happy, but it was clear that things were quickly unraveling. The episode came to a close, as MJ walked away from Tommy in tears.

Well, viewers, there you have it.  A bath, a buffoon, and a big booty…what more could you ask for?! And the drama is far from over.  The Shahs will be back next Thursday at 9/8c…stay tuned!

TELL US – THOUGHTS ON THE LATEST SHAHS OF SUNSET EPISODE?