Shahs of Sunset Recap: Clash of the Persians 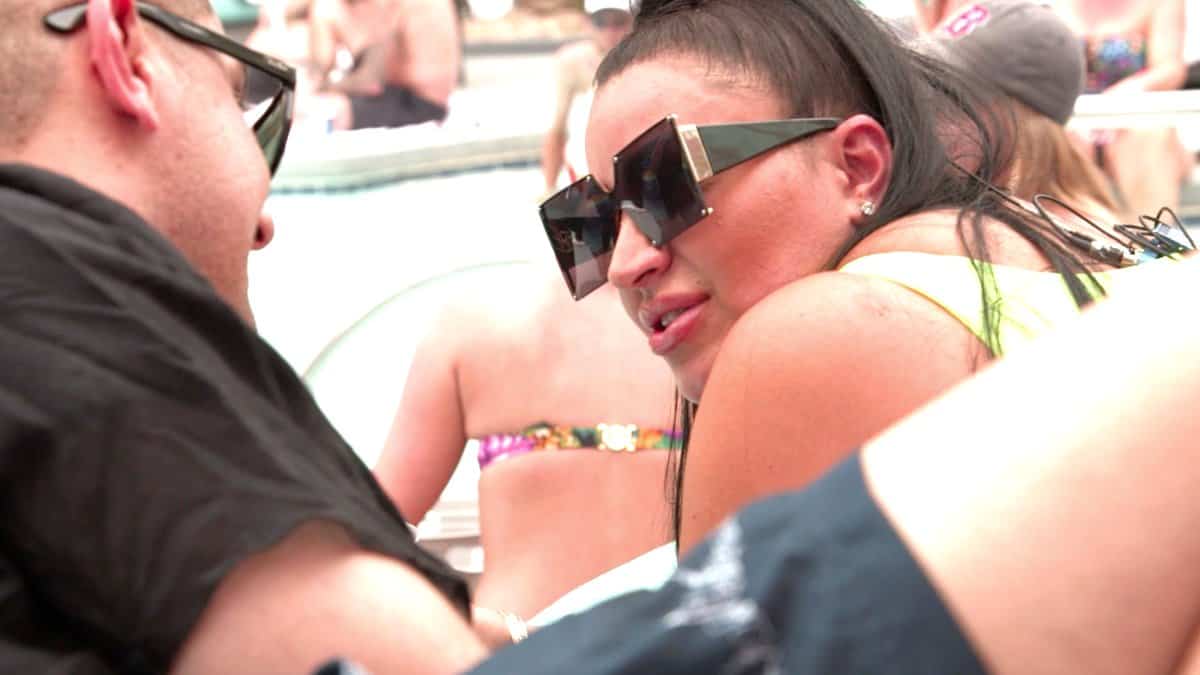 The Persian Posse of Shahs of Sunset left the sunny strip last night as they headed off to get turnt up in Vegas for MJ’s bachelorette party! The entire crew was going and everyone was filled with excitement–particularly MJ, who had some rather debaucherous plans for her time in the city of sin!

The other members of the squad had some naughty plans in mind, as well.  GG thought she might actually go ahead and take the plunge with Nema, since they’re both single, and Mike, well, Mike’s always up to something, and he was anxious to contact his Las Vegas “connections.” According to Mike, once you “connect” with someone in Vegas, they never forget you–just ask the women of the Spearmint Lounge!

When they arrived in Vegas, they were immediately given the full star treatment, complete with over-the-top suite and over-the-top eats.  Mike was already fielding phone calls from his former Vegas hookups, and said he was ignoring them, “even though he’s single.” But what about Morgan, you ask?  Well, he’s been hiding her from his parents because she’s not a Persian Jew, so naturally, he planned  on acting out in Vegas–something his parents were sure to approve of.  He was also harboring a secret about the status of his relationship with Morgan–but more on that later!

When MJ sees the bridal suite that her man of honor, Reza booked for her, she spoke about getting “violated,”  and said there was going to be a “mandatory sex in the champagne room” policy for the weekend.  But what about Tommy, you ask? Well, MJ said she never asked Tommy what he did at his bachelor party, which he claimed was a “total blackout,” so she figured whatever she got up to over the weekend was fair game, and she’d be going as far as she could right up to the point of Tommy calling off the wedding!

The crew started the party off by the pool, and MJ proudly showed off her ample booty in a lime green thong, happy to standout among the many size zeroes sunning themselves alongside her.  But a conversation she had with Nema could spell trouble for the bride to be.  When he jokingly asked her if she was ready to settle down, and have just “one d**k” for the rest of her life, she not so jokingly admitted that she was not, and that she had a simple remedy for escaping the monotony of monogamy–cheating! She said that if she wasn’t getting enough loving at home, she’d get what she needed elsewhere.  Now, Tommy, I hope you were watching because her definition of “enough” is several times a day, so double up on those vitamins!

As the crew prepared for their first night on the town, Reza confided a secret to Shervin: all was not as rosy as it seemed with Mike and Morgan.  In fact, he said, while they were gone, she was packing her things and moving out of Mike’s house.  Now, this wasn’t idle gossip.  Reza was hoping that between the two of them, they could talk some sense into Mike, and help him see the error in his ways before Morgan walked out of his life forever.  Now what do you think Mike was doing during this time? You guessed it..he was fielding phone calls from his bevy of Vegan “connections,” that’s what! Some things just never change.

As the group settled down to dinner, talk quickly turned to relationships, and the troubles many of them were having when it came to making them work.  This could take all night! Mike admitted that he’d just gotten off the phone with GG’s ex husband, Shalom, and that as promised, he’d gotten him to agree to stop trying to contact GG.  However, he cautioned her that he could only do so much, and that continuing to wear her wedding band was sending him mixed signals, and leading him to believe that she wanted to give their marriage another chance.  GG, of course, knows this, and fully admitted that she was aware he knew that she was still wearing the ring, and that she was only doing it to “f**k with” his head.

MJ was more concerned about what was happening with Mike and Morgan, and asked point blank if Mike had told her that he was never planning on marrying her.  She pointed out that it was ridiculous for a 40-year-old man to be in a relationship for nine months, and hide it from his parents, and that it was unfair to string poor Morgan along.

Mike insisted everything was fine, and that he could handle his own relationships, and suggested that MJ do the same.  MJ said she wasn’t some “mama’s boy,”  and that she was in the relationship she wanted, with whom she wanted, and wasn’t worried about what her mother, or anyone else, had to say about it.

Things then took a nasty turn, when Mike told MJ to ‘wait until she was divorced,’ then she’d understand. MJ shot back that she didn’t “marry someone and then cheat on them,” and that’s when Mike brought down the hammer.  He said that MJ needed to “relax” because she’d already “had half the city.” It was a low blow and, as you can imagine, the entire table sat in stunned silence, as Mike got up to walk away.  But MJ took it all in stride.  She stopped him, and joke that she hadn’t had “half the city,” she’d had “the whole city,” and he’d better never forget it.

It brought a moment of much needed levity to the dinner, and it looked like things were going to go back to normal until Reza decided to ask Mike what was really going on with him.  When Mike, once again, insisted everything was fine, and that he just wanted everyone to stop pushing him, Shervin piped up, and said he’d heard Morgan was moving out.  That did it!

You see, Mike had only shared this secret with Reza, so he knew that he’d obviously been talking behind his back.  Mike turned to Reza, and said that, although he loved him “like a brother,” and would do anything for him, he’d never confide in him again, and he got up, and walked away for real this time.  Destiney and Shervin went after him, while he continued angrily ranting about not being able to trust Reza.

Back at the table, Reza said that this was all ridiculous.  After all, he’d only wanted to help Mike save his relationship.  And isn’t he always helping Mike in one way or another? Not that you’d know it, though.  Reza pointed out that he never seemed to show any appreciation for all that Reza had done for him, and after all the time Reza had put into his house, wasn’t it only polite for Mike to have bought him a little gift, or even a card, to say thank you?! It was a fair point.

When Mike finally returned to the table, he tearfully apologized to MJ for offending her, and they hugged.  She said that she wasn’t offended, and that she wanted them to always be close enough to be real with each other, and call each other to the carpet when they felt they were in the wrong.  Mike agreed with the sentiment, but remained angry at Reza.

The two friends kept their distance from each other for the rest of the night, as the crew headed out to the clubs for drinks and dancing.  But as MJ watched her single friends flirting and dancing, she came to a revelation: this just wasn’t her anymore.  She was missing Tommy, and decided to call it a night.  She went back to her hotel early with some of her glam squad, and enjoyed a night of PG-rated fun.  She loved Tommy, she said, and anyone who thinks she’s going to step out on him is wrong!

The show faded to black from there…but the party (and the drama) is far from over! Stay tuned!