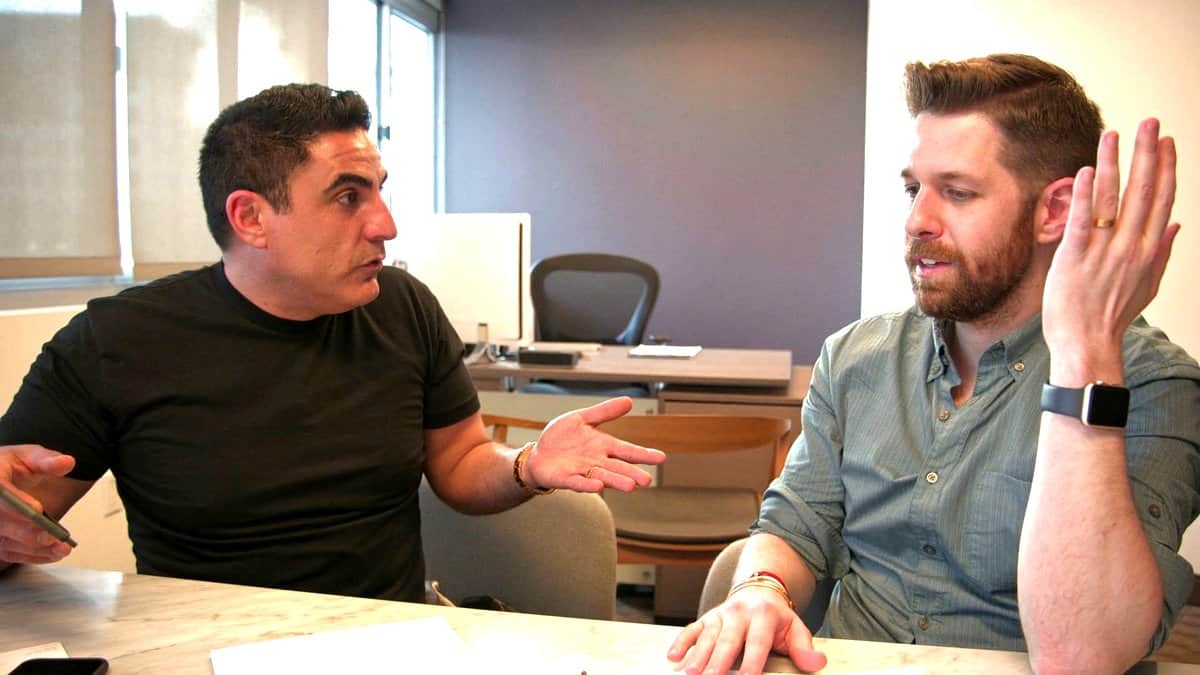 Shahs of Sunset is quickly becoming one of my favorite reality shows.  In addition to the usual  drama and tea spilling, viewers are also served a little lesson in Persian language and culture, and you usually end up learning something you didn’t know before. For example, last night, the crew was celebrating Nowruz, Persian New Year, and well, I’ll  just say it, Persians do it better!

The celebration was the perfect backdrop for the episode because each member of the Persian Posse seems to be at a crossroads.  GG, for example, is trying to move on following her divorce, and to that end, she and Shervin took a trip to a local jeweler to find out just how much that diamond sparkler she’s still sporting on her left hand is worth.  She’s decided she’s not giving the ring back to her ex, so instead, she decided that maybe she’d have it made into something a little less “engagement-y,” or perhaps just take the money, which might not be a bad idea, considering the appraiser valued the rock at a whopping $165k!

On the other side of town, MJ and Tommy were preparing for their upcoming wedding.  They’re madly in love with each other, but just like most couples, they have their issues.  They decided to be proactive and see a couple’s therapist, whom they hoped would help them learn to communicate more effectively before they became man and wife.

MJ feels that Tommy is quick to anger, and yells too much.  Tommy feels that MJ is too negative, and too much “like her mother,” Vida.  According to him, she spends far more time telling him what she thinks he’s doing wrong, than giving him credit for the things he does right.  He feels he doesn’t get the ‘appreciation he deserves,’ and that she’s often “harsh” with her words.  The therapist advised them both to appreciate what they’d found in each other, and they both agreed they were quite lucky, and Tommy told her, “it’s me and you until the dirt.” It wasn’t exactly poetic, but it’s love.

Reza and his husband, Adam, were also on the precipice of change.  They’re moving into a fabulous new home, discussing the possibility of having a child via surrogate, and Adam is converting to judaism.  But Reza was feeling a little uneasy.  The cost of surrogacy is steep, and he had just invested $500k, his entire life savings, in a haircare business–and Adam didn’t know a thing about it.

Now, just before Nowruz comes a celebration called Chaharshanbe Suri, a ritual in preparation for the new year, which involves jumping over a fire to “burn away” the past.  GG’s family has been celebrating at the beach for years, and in fact, that particular stretch of beach has been designated to the ritual because of them.  This year, she invited the entire crew to join them.

Nema was thrilled! Not only was it a chance to get more immersed into Persian culture, something he feels was missing in his “Americanized” upbringing, but he also figured it was a great opportunity to make a good impression on GG’s family, and by extension, get closer to GG.  He’s got it bad, y’all!

Unfortunately, Reza couldn’t make it to the celebration because his new home was burglarized and he was dealing with the police, and lamenting the loss of some of his most prized possessions.  He was also starting to feel like karma was coming back to bite him.  After all, keeping such a huge secret from Adam was wrong, and perhaps the universe was telling him it was time to come clean.

After they left the beach, Nema, Mona, Shervin, GG, and Destiney had dinner at a local Persian restaurant, and Destiney revealed that the upcoming Nowruz celebration had her feeling emotional.  Her father wasn’t around when she was a child, and she feels she needs some closure.  She said she wanted to sit across from that “son of a b***h” and have a conversation, and to that end, she told the group that she’d hired a private investigator to find him. Destiney’s friends managed to cheer her up with some dancing, but her father was clearly weighing heavily on her mind.

Now, Nowruz coincides with the spring equinox in Persia, which this year happened to be at 9:15 am, so the celebration was a little more low key than the American version.  Nema and Mona hosted their father, and half sister, Sara, but being with them set Nema a little on edge.  He said that he felt his father thought he’d sold himself short by not becoming a doctor or a lawyer, and it hurts Nema that the older man can never seem to tell him he’s proud of him. He also feels “resentful” that his father tried so hard to “Americanize” him when he was growing up.  He understands that his father just wanted him to be able to make his way in the US free of the racism he faced himself, but he said he’s very resentful that he’s been so far removed from his culture, and his family in Iran.

Reza and Adam hosted Mike, his new girlfriend, Morgan, and MJ, Tommy, and Vida…and Reza’s bad luck continued in earnest.  First, he realized the goldfish he was using for his “Haft-Seen,” the traditional table setting for Nowruz, had mysteriously passed away.  He threw it away, and hoped nobody would notice, but Vida did a pretty thorough inspection of the table setting,  and loudly called attention to the fish’s absence.  I have say that I’m glad Vida isn’t my mother…but I LOVE her!

As the celebration wore on, Reza decided to show his guests the very beautiful, very large, and very expensive emerald he’d bought for his mother.  He’d planned to have the stone set in a ring he’d designed, and he was really excited about it.  But just as everyone was passing the emerald around, Adam dropped it on the floor, and a chunk of it broke off.  Emeralds are notoriously fragile, especially before they’re set, and he couldn’t exactly glue it back together.  He was clearly upset, and when Adam offered to replace it, he was quick to point out that he couldn’t afford it.

Mike was planning to have everyone come to his mother Sue’s house for dinner that evening, by announcing — in front of everyone, mind you — that he wouldn’t be bringing Morgan.  His parents haven’t met any of the women in his life since his divorce, and he wanted to wait until it was “serious.”  Poor Morgan’s feelings were clearly hurt, and everyone seemed pretty embarrassed for her, but Mike was sticking to his guns.

That evening, Reza, MJ, Tommy, and Vida made their way to Sue’s house for Nowruz dinner, and Vida was quick to point out to Reza that Sue actually had several goldfish floating in a bowl on her Haft-Seen table, and clearly knew the correct way to host a Nowruz celebration.  Did I mention I love her?

Nema, Destiney, Mona, and Shervin were having Nowruz dinner at GG’s condo.  They were having a great time, and GG even hired a Haji Firouz, an elf like creature, who is known as the Persian Santa Claus, and arrived bearing gifts for everyone.

Since the entire crew couldn’t be together that evening, they decided to FaceTime to wish each other “No-Rooz Mobarek,” the traditional new year’s greeting.  But Mike seemed to want to rush the phone call, especially when Destiney asked about Morgan, and quickly hung up on his friends without another word.  Destiney called him back to admonish him privately about leaving Morgan out, and as we reported yesterday, Nema took to social media to call him out for “hiding” his love life from his parents.  But all in all, the evening went off without a hitch, and a No-Rooz Mobarek was had by all.

The following day, Reza and Adam went to see an egg donor specialist, and it was clear that Reza was a little nervous.  He no longer had the money to pay for the surrogate and procedures, which they were told would cost a whopping $125k, plus an extra 10-15 grand for the twins Adam was hoping for.  Reza asked if Adam had the money, and he said he didn’t, so Reza finally decided to come clean about his investment.

Reza told Adam  that he’d put his entire life savings into the haircare company, and admitted that he’d had no intentions of telling him about it.  Adam was angry, but he took it in stride.  In the end, it was decided that they would wait until their home was finished, and then use the equity to pay for the egg donor expenses.  Reza also agreed to be more upfront and honest in the future…a truly wonderful Nowruz resolution.

We’ll see more about how that goes next week when the Shahs return for more drama, more fun, and a trip to Vegas for MJ’s bachelorette party…Stay tuned!

TELL US – THOUGHTS ON THE LATEST SHAHS OF SUNSET EPISODE & THE RECAP? IS REZA’S HAIRCARE INVESTMENT A GOOD IDEA? WHY DO YOU THINK MIKE IS HIDING MORGAN FROM HIS PARENTS?