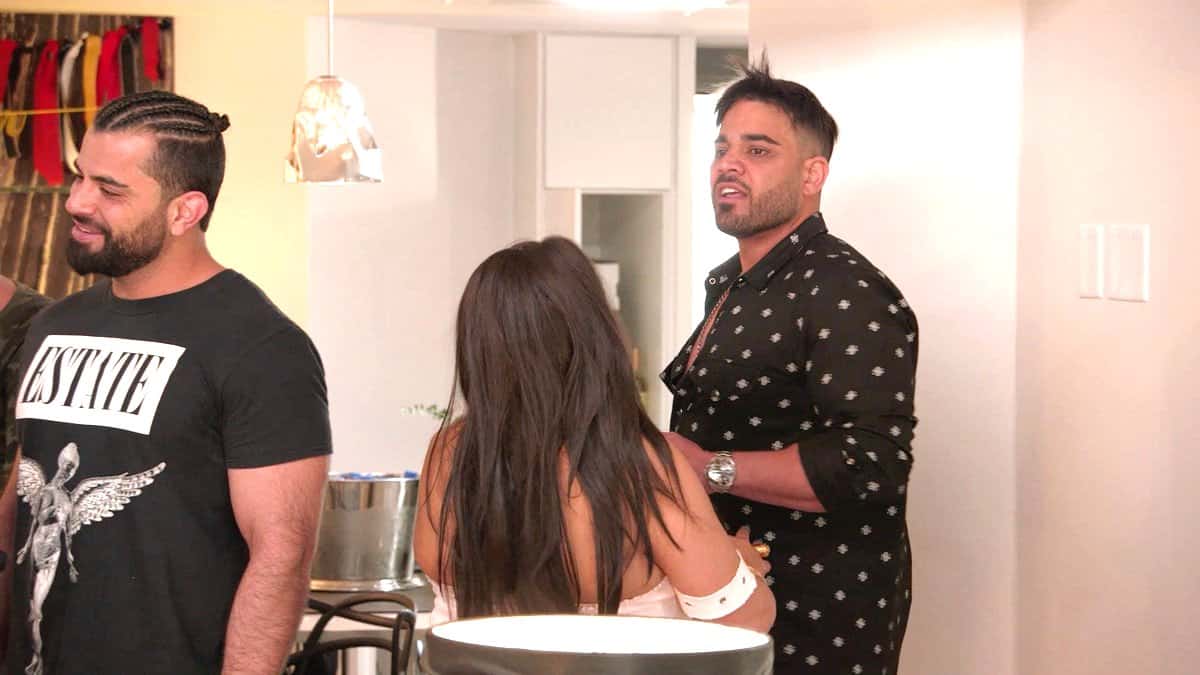 Last night’s episode of Shahs of Sunset managed to bring out both the best and the worst of the Persian Posse, as they continued their trip to Vegas for MJ’s bachelorette party.

When we picked up with the crew, they were all just waking up hungover, but no less fabulous, after their first night on the town in Sin City, and Reza had an amazing surprise for MJ—her fiancée, Tommy, whom Reza had flown out for the occasion. MJ was thrilled, and soon the gang was ready to get turnt up all over again.

The only problem was the obvious tension between Reza and Mike, who were both still angry following their showdown the night before at Mr. Chows, and were actively ignoring each other. Mike had confided to Reza that his girlfriend, Morgan was ending their relationship, and was moving out of his house while they were gone. It had been obvious that Mike was upset, and before he went off and did something stupid, like having a Vegas tryst, Reza thought he should tell Shervin so that they could both watch out for him. Sounds like what a good friend does, right? Well, not according to Mike.  He was furious that Reza had “betrayed” his confidence, and he still wasn’t over it.

When everyone headed out for their last night in Vegas, it was clear to everyone that Mike was on the prowl. He was flirting with other women, and from the looks of things, Morgan was the furthest this from his mind. No one thought much of it, it IS Mike, after all, until the following morning when they realized that his bed hadn’t been slept in, and he was nowhere to be found!

GG thought she had a pretty good idea where he might be, and told the others that she had footage on her phone from the night before to back up her suspicions.  In the video, Mike could be seen having what looked like a flirtatious conversation with an attractive blonde, and “making it rain” as various women dance with and around him.  Anyone seeing the footage would have assumed the worst—especially anyone who knew Mike’s history with women!

Since they were getting ready to head home, they started calling Mike to make sure he’d be on time, and once he answered the phone, he said he’d be back right away. When he got back to the main suite, Shervin mentioned that they all knew what he’d been up to because GG had footage of him from the club. Mike said he hadn’t been doing anything, and wanted to know exactly what was in that video. He went to confront her right away, but GG assured him it wasn’t that big of a deal, just him flirting with the blonde.

All the same, Mike was obviously very irritated, and explained to GG that the blonde had a boyfriend, and that he’d really just been being friendly and playful. GG said fine…whatever. Honestly, what did she care, right?

When they were all together in he living room area of the suite, Reza mentioned that Mike was wearing the same clothes from the night before. It was shady, and it was meant to be, and Mike knew it.  He told Reza that he was an  “instigator,” and needed to STFU. From the look on his face, he was getting angry already, and most people would have quit while they were ahead, but Reza was on a mission.

He loudly addressed the rest of the room, saying that Mike is always blaming them because his marriage didn’t work out, or because he wasn’t in a relationship, but he had cheated on his wife, and had stayed out all night while his girlfriend was home moving her things out of his house, and clearly nothing had changed. That did it!

Mike went off on Reza, calling him a “fat f**k,” and saying he had no boundaries. He was screaming, and Destiney tried her best to calm him down, but that ship had sailed. Reza was yelling back at him about the night before when he’d gone off on him at Mr. Chows, and insisting that he’s just been trying to help, and, as usual, Mike had been ungrateful. Then he dealt the death blow. He told Mike to go call Morgan, and tell her how much he loved her while he cheated on her, just like he’d seen him do countless times with Jessica.

Mike yelled out a string of expletives before storming out of the room. Reza had clearly struck a nerve because Mike was visibly shaking and crying, as he left, and everyone suddenly became very concerned, including Reza.

They all knocked on Mike’s bedroom door, but he yelled that he didn’t want to see or speak to anyone. Reza however walked back and insisted that Mike let him in. When Mike opened the door, he began yelling at Reza all over again, but then accepted Reza’s bear hug. He began crying really hard, and saying that he was still “dying inside” over his divorce, and that knowing he had hurt Jessica devastated him every day. He said was afraid he’d ruined her life, and the last thing he wanted to do was hurt Morgan that way.

Reza was shocked by this sudden flow of emotion and ownership from Mike. He told him that they all loved him, and that they knew what a good person he was, and that he wouldn’t have hurt Jessica or Morgan on purpose, but that maybe if he could be this open and vulnerable in his romantic relationships, and remember these things, he’d have better luck with women going forward. Mike knee Reza was right, and the two men hugged it out once more, before they emerged from the room to have a group hug and share a toast with the others before heading home.

Back in LA, GG was preparing for her “Elevator” talk, which is a “Shark Tank” style presentation, during which business owners pitch their products and ideas to a room full of investors in the hopes of getting funding.

Okay, “prepare” may be a strong word for what GG was doing, and Nema knew it, so he and Shervin headed over to her place on the day of the presentation to check on her progress. Unfortunately, other than testing her own product all day, GG hadn’t done much. She was high as a kite when they arrived, and Nema worked on the presentation, while GG ate pizza and played with her cat.

When they arrived at the venue, the full weight of the situation seemed to suddenly dawn on GG, and she became extremely nervous, but Shervin told her it was “a roomful of potheads,” and she needed to relax, but it wasn’t to be. GG was anxious and clearly unprepared, as she sat on stage speaking to the audience, as though they were a guy she was flirting with at a bar. She giggled, flipped her hair, and basically said nothing at all other than to tell them to read the slides that went by behind her. It was painful and awkward, and clear that they weren’t impressed.

But Nema and Shervin assured GG it hadn’t been that bad, and that she’d have plenty of other chances to present her ideas in the future. GG felt bad enough as it was, they both figured, and it was hardly her fault that she hadn’t acted professionally—the woman’s never actually even had a job, so it was likely that she’s barely understood the meaning of the word.

Later, MJ had a dress fitting, and what started out as an exciting day turned a bit sour, as her mother, Vida went full mother of the bride-zilla, complaining about MJ’s choice of mermaid-style dress and its omni present gravity defying cleavage. It seems Vida thinks she’s the most important person on the big day, and seemed genuinely confused when Reza explained that she wouldn’t be sitting with the bride and groom at the reception. She settled on the idea of sitting with him and the rest of the gang, saying that, surely they would be honored to have the mother of the bride at their table. Always the gentleman, Reza said rather unconvincingly that “of course” they would.

The show faded to black from there, but the crew is gearing up for some pretty heavy drama in the weeks to come, including a big prenup battle between MJ and Tommy, as their wedding day draws closer. Stay tuned!